Why I am vegan. (Politics of Eating)

Being vegan is about more than what I do or do not eat. For me, it is a prayer, a petition asking why animals and people suffer greatly in a Universe created by a benevolent and loving G-d. This question led me to a lifestyle that is focused primarily on abstaining from the consumption or use of anything that comes from or contains animals or animal products.

Veganism is a corollary of ahimsa, the universal principle of compassionate, nonviolent living, the a priori maxim of Judeo-Christian ethics and Eastern spiritual philosophies. Mohandas Gandhi said "The greatness of a nation and its moral progress can be measured by the way its animals are treated."

Veganism, for me, is not so much about dietary abstinence as it is about spiritual sustenance; spiritual sustenance that fills the dark and empty spaces I feel lost in when I witness animal and human suffering, or anything that is an affront to what is Holy or good in the world. It is a lifestyle imperative that flows from my love of animals and reverence for life.

It wasn't until I got to university, on my own for the first time, that I realized there was a disconnect between what I felt in my heart (love for animals) and what I was putting in my body (corpses of animals), and that my spiritual life would have to mediate between and reconcile the two. It did. I stopped eating meat and chicken and--after I realized fish are not plants with gills--seafood went too. Becoming vegetarian made me feel I was doing something to lessen the suffering of animals (or that at least I wasn't contributing to it). I was making a statement about what my conscience could not live with and what my body could live without, but it also felt like an inadequate-human response to a spiritual dilemma. 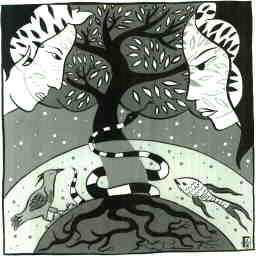 Why G-d's creation suffers, and how and when this suffering will cease is a question that has always tormented me--a mystery only G-d has the answer to. But I couldn't even bring myself to ask this question knowing that what I ate, what I wore, what I did, contributed to suffering in this world. For me, to be able to fully explore the question of suffering, I had to give up the products and by-products that can't be produced without causing suffering to animals--including meat, eggs, milk, fur, leather, wool, down, and cosmetics or chemical products tested on animals. (I include circuses, zoos, and all other institutions that confine or exploit animals in this list). To the extent they don't cause suffering, in any way, I consider consuming, wearing or watching them acceptable.

This ethical standard I try to live by is predicated on Albert Schweitzer's "Reverence for Life," my desire to decrease, or at least not contribute to, the suffering of any sentient being; and the interrelatedness and common origin of all life on Earth. If she, he, or it suffers, I suffer. What constitutes suffering, as far as I understand it and the way most Buddhist's define it, is that everything/everyone wants to live and nothing/no one wants to feel pain. Anything that causes pain or death causes suffering. But eradicating all animal products from my diet, my clothes, and every aspect of my life is also, ironically, a statement about my powerlessness in the face of the world's suffering. I have had to admit that what I don't eat isn't going to have a major impact on the violence and the suffering of the innocents in the world; that it would take more than my abstinence from eating animals to bring about a state of ahimsa to the world. Veganism, for me, is asking G-d to do what I am incapable of doing my self.

I read something in the news recently about the ongoing abduction and breaking of baby elephants in Thailand. They are taken from their mothers, tied by their feet so they can't move, beaten with sharp instruments on their head till they bleed, and kept awake by loud noise, sometimes for days. This torture goes on until they either go mad or become docile enough to perform in circuses and tourist attractions.

Two blocks from where I live and work an injured pigeon has been cowering under a store ledge trying to avoid the prowling cats, blinding snow, wind, and other urban predators. Hundreds of people have passed by and ignored him the way they ignored the mangled pigeon I found during one of last summer's most unbearably hot and humid days. He was attacked by a cat, couldn't fly, hobbled on one leg, looked unbearably sad and worn out. When I take these animals to the local wildlife rehabilitation center I am as much pained by the broken-hearted indifference of the other people who saw their suffering and did nothing as I am by the suffering itself.

For anyone sensitive to the suffering of animals and people who cannot defend or fend for themselves, these are the things that rend the heart and are a call to action and prayer. They are a call to action because to do nothing is to court helplessness and depression and defeat. They are a call to prayer because in an imperfect world, suffering, which is a symptom of separation from the Divine or the whole of creation, must exist. Prayer then becomes the last refuge of those who suffer greatly as a result of bearing witness to great suffering.

I realize this is somewhat of a spiritual-evolutionary leap; that I am, to a certain extent, intervening in the process of natural selection and survival of the fittest in my desire to pre-empt or lessen the severity of suffering in the 'animal kingdom.' People are always reminding me that, in nature, the big fish eat the little fish, we all prey on and consume some thing or someone, that it's a dog-eat-dog world. I know all that. I know it. But a fundamental principle of evolution is that those who adapt to the environment most efficiently increase their odds of survival. The predatory, polluting, war-mongering behavior of humanity has pushed us-and unfortunately most other life forms-perilously close to extinction. So is it too much of a stretch to posit that reverence for life, eating as low down on the food chain as possible and a desire to preserve that which sustains life (e.g. lakes, rivers, streams, forests, the ozone), may be a last-ditch attempt by the evolutionary, self-preserving wiring in us, if not the entire life-force of the planet, to move us further from the precipice of extinction?

We have polluted, consumed, caged, corrupted, deracinated, tortured, and tormented just about every form of creation on Earth. I think ahimsa and veganism are both a symbolic and a very real way to reverse this trend. Disregarding the sanctity of life and the planet with impunity has given us a world that is rife with violence, war, pestilence, starvation and poison in our air, water, and food. Being vegan is a way of becoming conscious of our actions and their consequences. It is a way of giving thought to the pain, suffering, and terror that occurs as a result of turning a living, breathing, feeling animal into the meat we put inside ourselves or in front of our children; a way of considering the global consequences of deracinating another forest, poisoning another river, depleting more of the ozone, feeding cattle on arable land that could be used to eradicate world hunger.

Like a fast at Yom Kippur or Christian Lent, I am trying to make myself ready to petition G-dto rid the world of suffering and violence that I can't personally eradicate or change in any lasting or globally significant way. I am asking Him to do something about the baby elephants and the wounded pigeons and the broken hearts of the world.

Jeffrey M. Freedman is a longtime writer and journalist (www.jeffreymichaelfreedman.com), animal rights advocate, and frequent contributor for the International Vegetarian Union in the United Kingdom and several other publications. jeffmf@earthlink.net