Just as Florida citrus growers were learning to adapt their groves to fight citrus canker disease, a deadly new plague is threatening to destroy the industry. Citrus greening, a bacterial disease carried by insects, weakens trees and forces fruits to drop before they are ripe. The fruit is indigestible, and the tree rapidly dies. Growers are still not sure how to control the infection, which was first found in the United States last August, and now has spread to all urban counties in southeast Florida.

According to Reuters, Florida growers have contacted citrus farmers in Sao Paulo, Brazil, where they have been fighting off the disease since 2004. Brazilian citrus farmers said controlling the epidemic was possible but only through aggressive measures such as constant, careful scrutiny of the groves; immediate removal of sick trees; and the persistent use of pesticides. 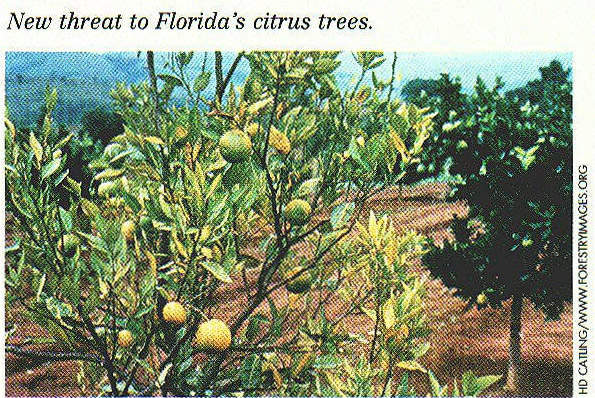 Juliano Ayres, a scientific manager of Brazil's Fundecitrus, an association of citrus producers based in Sao Paulo that work to protect groves against disease, warns Florida growers to take the infection very seriously. "Ninety percent of researchers say that greening is the worst disease you could have," he told Reuters. "Either you do the control, or you lose your grove in seven to 10 years."