The Tudors," Showtime's priciest bet to date, is a delicious study in contradictions.

It's a period drama set in the polite precincts of the British empire but replete with naked frolicking and dramatic violence.

That makes it an improbable but strangely apt metaphor for the network itself.

Nearly four years into the tenure of prexy Robert Greenblatt, Showtime is also something of a paradox.

With several acclaimed original series (such as "Dexter" and "Weeds") still in their youth, the pay net is hitting its creative stride in a way it has at no time in its 30-year history.

But when it comes to attracting subscribers--and the revenue those subs generate--it still can't seem to muster much traction.

And the net's backbone of theatrical movies, which draw high ratings, is in flux: Its three main output deals--with Paramount, MGM and Lionsgate--are all set to expire in the next two years.

"The Tudors," which debuts April 1 at 10 p.m., features Jonathan Rhys Meyers as a hunky Henry VIII facing revolts, falling in love and fighting wars. In the show, the king mourns the death of his uncle, declares war on France and jumps into bed with two squealing damsels--in the opening 15 minutes. 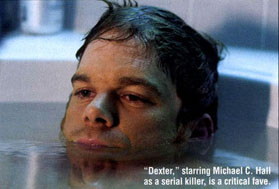 With elaborate but soapy plot elements, "The Tudors" has the potential to bring together the two constituencies Showtime has thus far been unable to unite: critics and elites who might be partial to period pics, and broader commercial auds drawn to the sex and shenanigans.

In other words: they're hoping for a more successful "Rome."

"It's not like we're deviating from history; we're staying very true to it," says Greenblatt. "The reign of Henry VIII is one of the world's great soap operas."

There's a lot riding on the show, especially considering Showtime's performance over the past few years has had more ups and downs than the British monarchy.

Despite the creative boom, the net continues to struggle for viewers. Two of its main original series, "Sleeper Cell" and Brotherhood," averaged fewer than 250,000 total viewers in their initial airings last year.

Even a buzzed-about show like "Weeds" debuted with an average of just 380,000 viewers in its first season before surging to 540,000 in its sophomore year. 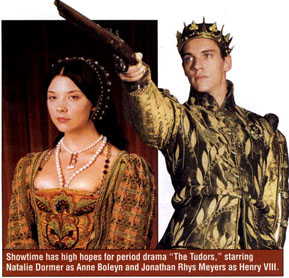 Showtime execs say movies will continue to be an important part of the lineup, especially as CBS topper Les Moonves ramps up his own theatrical efforts.

But Moonves has also criticized the cost of the outside deals, raising the specter that some might not be renewed.

And Showtime is squeezed by a number of other factors that are pinching all pay nets, including the spike in original programming from basic-cable nets and the fact that cable operators are now spending less to market premium channels, preferring instead to push their Internet and telephone services.

Still, by a number of measures, Showtime is showing marked improvement.

This is particularly true in the case of "Dexter," the serial-killer series starring Michael C. Hall that debuted last year with the biggest marketing campaign in the net's history.

The show, which, like a certain mob hit at a certain other pay net, takes a familiar genre and sprinkles in enough humanity and comedy to make it feel fresh, drew an average of 738,000 total viewers in its first season last year.

Both "Dexter" and "Weeds" are signs that the Greenblatt era, which began with fanfare in 2003, is beginning to pay dividends.

Execs hope "The Tudors" could further the impact the former producer has had, especially on the subscriber front.

Showtime now pegs its subs in the 14 million-15 million range, while Nielsen indicates the net last year goosed subs by more than 5% over the previous year, to more than 18 million. (The Nielsen numbers are thought to be exaggerated because of piracy and free promotions.)

Still, the net has embarked on a weird double game for "The Tudors," hyping it even as it also tries to manage expectations.

On the one hand, Showtime has undertaken the bold move of taking on the Sunday night programming of HBO at the exact period when HBO will flex its muscles with new seasons of "The Sopranos" and "Entourage."

(Showtime will be in a better position once "The Sopranos" wraps in June, when HBO push out a flurry of promising but unproven programming in the hope of breaking out a new hit, including the David Milch surfer drama "John From Cincinnati," the half-hour Gabriel Byrne therapy show "In Treatment" and the ultra-explicit relationship drama "Tell Me You Love Me.")

And Showtime will reportedly spend about $8 million on marketing "The Tudors," to go along with its hefty budget.

But execs also seem torn on how much to play up its importance. "It would be great if this became a big hit," says Showtime CEO Matt Blank, who, after pausing a second, adds, "But we believe it can be a success even if it doesn't become a signature show."

In fact, Blank says the net can make do without any true breakouts so long as it has a deep roster. "When I walk into a negotiation with cable operators and have shows like 'Dexter,' 'Weeds,' 'Sleeper Cell' and 'Brotherhood' in my pocket, that puts me in a very strong position."

Greenblatt says diversity is part of the programming philosophy.

"We could do another 'Dexter,' take a genre and put a twist on it," Greenblatt says. "But we want all of our shows to be as different (from each other) as possible."

Greenblatt is even toying with an unlikely genre: sitcoms.

Having greenlit a David Duchovny comedy last week, he also says he believes the three-camera sitcom, currently out of fashion on cable, is ripe for a revival and could be part of a future Showtime slate.

For "The Tudors," the net is taking an aggressive approach to the Emmys, sending out awards screeners as early as this week. 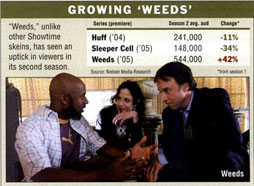 While no network has been able to definitively convert those plaudits into hits, it's notable that, unlike the recent critical/commercial divide at the box office, some of the best-reviewed shows are also some of the best-rated.

Of course, no matter how strong shows are, Showtime faces the pay TV problem of not being able to market to the potential subs they hope a new show can bring in.

That's why it's trying some aggressive sampling for "The Tudors," including giving away the show two weeks early on a free OnDemand platform and also partnering with DirecTV on its OnDemand platform.

It also is streaming the show on a number of sites, including the first-ever full-episode stream on IMDB.

"We just really need to make sure we put this show in front of as many people as possible," Blank says.