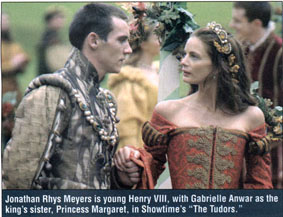 A big, bold, opulent gamble, "The Tudors" is not the great series that it might have been, but it's certainly a watchable and diverting one--lustily combining liberal doses of bodice-ripping with medieval geopolitics. Jonathan Rhys Meyers brings virile wattage to this 10-part project as young King Henry VIII--whose onscreen image has normally resembled Orson Welles in "Touch of Evil"--in a narrative that meanders occasionally during its first six installments but seldom fails to entertain. Uneven casting tempers a more enthusiastic appraisal, but Showtime clearly has an attention-grabbing concept whose international appeal should justify the dice roll.

It's Showtime's frequent misfortune to operate in HBO's shadow, and 'The Tudors" (whose onair promos invite comparisons to "The Sopranos," which sounds like cruising for a bruising) faces a similar dilemma. After all, the other pay channel just wrapped up another centuries-old foray into history, "Rome," in scintillating fashion, albeit to more critical laurels than commercial bounty. Then again, as the French say, c'est la guerre.

In contrast to most depictions of an old, fat, detestable king, writer-producer Michael Hirst (who focused on Henry's daughter in "Elizabeth," starring Cate Blanchett) introduces Henry as a bright-eyed young man with washboard abs and carnal desires to match. Indeed, establishing the tone, he graphically beds a lady-in-waiting and declares war on France during the first seven minutes.

Ah, but all is not well in England. Henry is married to the older Katharine of Aragon (Maria Doyle Kennedy), who has failed to bear him a male heir. Meanwhile, his key advisor Cardinal Wolsey (Sam Neill) works to prevent war, though his motives are suspect, with the saintly Sir Thomas More (Jeremy Northam) representing the angel on Henry's shoulder, albeit one who is slowly losing his influence.

The opening episodes find Henry preoccupied with Vsins of the flesh, playfully jousting with his knights when he isn't finding new lasses to lasso. At the same time, nobles scheme against him, seeing the son of Henry VII--who took the throne in battle--as unworthy of the crown.

It's hard to tell much about Henry up to this point, and it's really not until the third and fourth installments that a coherent story begins to emerge, with the ambitious Thomas Boleyn (Nick Dunning) pimping out his commoner daughters, including the sloe-eyed Anne (Natalie Dormer), hoping to ensnare the king. The plot works, prompting Henry to press for a divorce--an act that requires papal dispensation--that they might wed.

It's a rich, fascinating backdrop, which makes you wish that in the early going the story were a little stronger, the king's personality a little clearer. Despite Rhys Meyers' piercing gaze, preoccupied as he is with regal pleasures, he only comes into focus after a near-death experience that heightens his determination regarding Anne.

On the down side. Dormer's Anne is a pivotal role, and she prowls and pouts like a contestant on "America's Next Top Model" but never proves particularly convincing. The story also drifts toward camp moments once Henry's sister Margaret (Gabrielle Anwar) arrives and is forced into a political marriage, leading to a sequence of breathy encounters that seem overly influenced by perfume ads.

By contrast, Neill serves as a steadying presence--conniving, but not necessarily evil; the gamesmanship regarding alliances with France or Spain are intriguing; and the costumes (by Joan Bergin) and sets are nothing short of ravishing.

The series begins each episode by reminding the audience regarding this oft-told story, "You only know how it ends." By merely sliding the timeline, Showtime has freshened up moldy history and should generate the kind of advance noise the pay channel covets. It's just that so far, those introductory chapters aren't quite as compelling as Henry's more-familiar epilogue.