A scribe in ancient Egypt

If a modern fourth grade student traveled back in time to ancient Egypt, he would be a celebrity because he could read and write. Most people in ancient Egypt did not know how to read or write. Writers or scribes were professional writers who composed letters and maintained records of tax payments of cattle and grain. Talented scribes would become architects or engineers.

In ancient Egypt, a young man could choose to become an architect, farmer, trader, sailor, fisherman, metalworker, scribe, or a soldier. All parents dreamed that their son would become a scribe. A scribe did not have to toil in the hot sun. It was easy to find a job -they could freelance (work on their own) or find a royal sponsorship. People were gracious and polite to a scribe. For instance, servants sprinkled water in his office several times a day so that he would not suffer from heat. 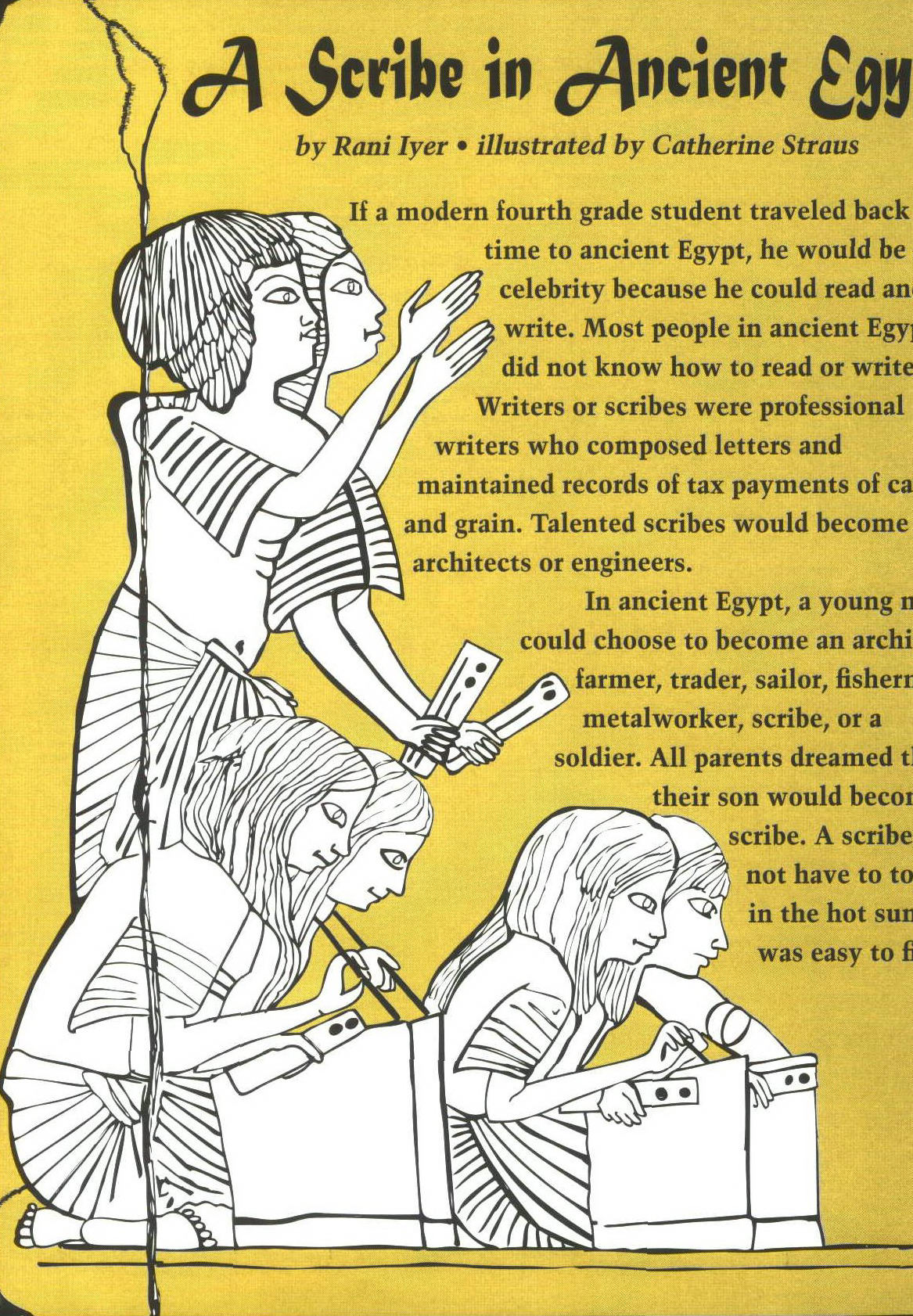 But a scribe had special challenges. He had to memorize at least 1200 signs! Some were picture signs called hieroglyphs. Hieratic, like the modern shorthand, was the language used in everyday communication. Hieratic was written from left to right (like Hebrew and Arabic), Today, it is funny to read Egyptian because they did not use vowels. For example, "Read like this," would be written as, "RD LK THS."

Boys in ancient Egypt learned to read and write in temple schools, commonly known as "Houses of Life." Like in modern schools, Egyptian boys entered their schools between ages 6 to 12. They lived in dormitories and returned home only for vacation. The lessons began early in the morning and ended by afternoon when it became too hot. They spent a lot of time copying texts and memorizing the signs. Boys also learned mathematics and geometry in the school.

They wrote on papyrus paper using black ink (red was used only for important words). Ink was a mixture of lampblack and gum. A student also learned to prepare and take care of their writing equipment. Scribes carried a wooden palette with two cakes of dry ink, a leather pouch for water, and wooden container for the ten-inch long reed pens. Students practiced writing on pieces of pottery called Ostracon.

Unfortunately, the discipline in Egyptian schools was strict. Teachers would hit a boy if he made a mistake in copying or came late to class. A modern student might decide that he likes his school the best after all!