We recently completed our three-bin composter to help manage the volume of discarded garden and kitchen waste from our recent venture into moving to the country and living more self-sufficiently. Our goal is to become totally self-sufficient on our three acres in northern Kentucky, and growing a big garden and raising a few chickens is one of our first steps. We quickly discovered that along with chickens and a garden there is a big volume of leftover plants and veggies, along with old chicken bedding and canning leftovers. The volume was shocking, and our little green plastic composter was not only ineffective, but overwhelmed! We hate to waste anything so we had to devise a way to use all this good organic stuff.

Our intent is to live as inexpensively as possible, so in planning our compost bins we wanted to make them simple and affordable. We started by collecting seven pallets all the same size. We got these from a local business who had a huge stack of them and was glad to get rid of them. We also needed six T-posts to support the pallets upright. We had a few that we had found in an old shed on our property, but had to buy enough to make up the difference. The posts and some fasteners were the only money we had to spend on the entire project.

We started by driving two of the posts so the tops would be even with the top of the pallet. We were careful to make them as plumb as possible. These would be the framework for one end of the bins. We then slid the pallet over the top of the posts. There is no need to attach these to the posts. Then we took a second pallet and attached it at a right angle to the first pallet, making it the back of the first bin. We attached it to the end pallet with some 3" deck screws. We then drove two more posts parallel with the first pair. This would complete the form of the first bin and be one side of the second bin. We repeated this process until we had three bins constructed. 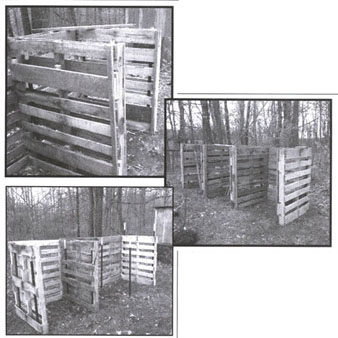 Since each pallet has a top and bottom side (the side with more boards on it than the other is the top side), when you erect the pallets one side of your bin is going to have big gaps between the boards. To fill these we cut small blocks to use as fillers for the shallow cutouts in the pallet where the pallet jack would normally go. We then covered these with some scrap material to fill the gaps. This needs to be as close to the same thickness as the boards attached to the pallet. It makes a much nicer job when attaching the fronts.

After completing the bins we were ready to enclose the front of the bins. The front had to be accessible to add or remove compost so we formed a "slot" for boards to slide in and out of and used blocking to separate them for good air flow. To do this we needed some lumber to make the removable front boards and 12 supports for these boards to slide in. We scrounged around and found some 2 x 12's and old tobacco sticks, but just about anything would do for this part. The smaller the width of the front boards, the more of them you will need to go all the way to the top of the bins. We used four tobacco sticks for each bin to make a "slot" for the boards to slide in. To make room for air circulation we cut a 2 x 4 block to separate the front boards as they were stacked.

This was so simple and inexpensive, and took less than a day to complete. Although it wasn't necessary, we finished off the front edge of each pallet with a 1 x 8 board and painted the whole thing black. The black paint was to make it as inconspicuous to the neighbors as possible, something my wife was very happy about.

We're still working on making our transition to the country, from a subdivision where having compost bins would probably have gotten us thrown out. The project was fun to do, fairly easy and quick to complete.