Were it not for the 338,000-man evacuation of almost the entire British Expeditionary Force and tens of thousands of French poilus from the beaches of Dunkirk, France, in May and June 1940, the history of 20th century Europe might be different. Had the Wehrmacht succeeded in encircling virtually all of England's professional soldiers, the next step might well have been peace negotiations between Germany and a beaten Britain. Whatever the surrender terms, the United States, an ocean away, would have been deprived of the English runways from which it would win the air war against Germany. Nor would the Allies have had a launchpad for the 1944 Normandy invasion.

In May 1940 the Wehrmacht came barreling through the Ardennes into Belgium--a surprise move that underscored one of the worst intelligence failures of World War II--and smashed into French, Belgian and British armies whose commanders often seemed more intent on keeping secrets from each other than they were on engaging the enemy. The Belgian army was surprisingly tough but too small to resist for long. The French were stunned by the ferocity of the German onslaught and were politically divided. And the British were pragmatists who, as the Germans tried to squeeze the BEF between armored forces east and the west of the Dunkirk pocket and against the sea to the north, quickly saw that getting back to England was an infinitely better option than any futile stand-your-ground bravery.

The Royal Navy initially planned to send a few destroyers to pick up soldiers from the still-operational quays of Dunkirk harbor, figuring they'd be fortunate to ferry 30,000 troops home before the Germans slammed the door. But then farsighted Admiralty planners mustered everything that could float--yachts, trawlers, lifeboats, barges, ferries, dredges and dories--and used them to transfer the rescued troops from the shallow water of Dunkirk's beach to the deeper-draft ships offshore. Without "the little ships," the British army would have had to swim home.

* Commanders count. The French army was thought to be the most powerful fighting force in the world in 1940. It turned out to be so poorly led that its collapse became the most embarrassing defeat of World War II.

* Have an endgame. The Germans had no plan for how to conquer the Dunkirk pocket, other than to obliterate it, and wasted time on fruitless firefights and pointless roadblock confrontations.

* Allies should actually cooperate. The British, French and Belgian armies had no common leader, poor communications and often operated solely with their own objectives in mind. 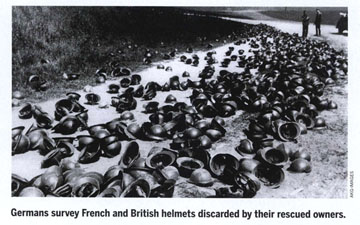 * Ill-timed halts serve the enemy. The Wehrmacht's armor commanders paused mid-battle to regroup, fearing they had outrun their supporting infantry and knowing they had lost half their tanks to enemy action and breakdowns. This gave the BEF time to beef up its perimeter and prepare to evacuate.

* Discipline pays off. The BEF comprised professional soldiers, who defended their beaches and patiently waited as long as 24 hours for rescue.

* Morale suffers when generals cry. More than a few senior French commanders literally collapsed in tears during the invasion, utterly overwhelmed physically, intellectually and psychologically. The effect on their stunned junior officers was profound.

* Lead from the front. French generals led from command centers as far as 40 miles behind the front lines, hampered by communications that often depended on dispatch riders. German commanders rode lead tanks into battle and knew what was going on.