Steve Sheinkin's Bomb: The Race to Build--and Steal--the Worlds Most Dangerous Weapon (2012) is an amazing account of the Manhattan Project. Its accolades are numerous: it was named a 2013 Newbery Honor Book, the 2013 Sibert Medal winner, and a 2012 National Book Award finalist. Skillfully merging science, history, and the personalities that made it all possible, this is one of the most comprehensive books for children on the topic. The well-documented text, filled with human-interest stories, and the numerous photographs lead young readers through an era of which they may know little about. What worried J. Robert Oppenheimer when the project was complete? The answer is what readers must ponder for their lives and future generations. In the conversation below, Sheinkin discusses the inspiration and research that went into Bomb, and he offers additional insights into writing informational books for youth.

BKL: What inspired you to write about the Manhattan Project?

SHEINKIN: It was the spies that hooked me. I was fascinated by how the Soviets were able to steal bomb plans from this top-secret American lab. And once I started reading about the subject, I couldn't stop.

BKL: You provide an extended list of resources that support your research. How long did it take you to conduct the research? When did you realize that you had enough information to proceed with writing?

SHEINKIN: I spent about a year reading and taking notes. I'd still be doing research if I hadn't had a deadline to actually write something. I knew I had enough information to start writing, but I just enjoy the research process a lot more than the writing process.

BKL: Did you uncover specific information in your research that surprised you?

SHEINKIN: Yes, some of the commando raids and secret-operations stories surprised me. I just didn't know these stories. My initial outline had nothing on the Norwegians parachuting behind enemy lines, but once I started learning about the story, I knew I had to put it in.

BKL: You've written about Benedict Arnold and King George. How is writing about one historical character different from tackling the Manhattan Project, which included so many personalities?

SHEINKIN: I guess a story with fewer characters is a bit easier to organize. Bomb definitely felt like the most ambitious book I've tried, just because it had so much going on. So the challenge for me was structuring it very carefully, so that one story flowed into the next, hopefully without causing too much confusion.

BKL: Who, other than Oppenheimer, did you find the most interesting? 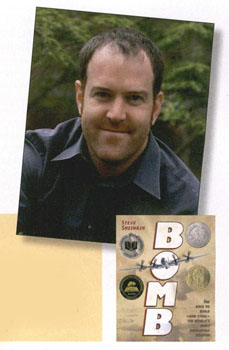 SHEINKIN: There are too many to list, but the teenage physicist Theodore Hall was the first character to really grab me and pull me in. And, of Course, everyone loves Richard Feynman. I had lots more on Feynman's antics with codes and safecracking at Los Alamos, but I had to cut it back just to keep things rolling.

BKL: I recently met a woman who was a payroll clerk at Oak Ridge, Tennessee, in the 1940s. She has fond memories of the social life in the "secret town, "although she had little awareness of what happened there beyond her job. Did you visit Los Alamos and Oak Ridge to get a sense of life in those places?

SHEINKIN: I visited Los Alamos, and I understood why [General Leslie] Groves and Oppenheimer liked the spot for a secret lab. I saw some of the old buildings, including the house on "Bathtub Row," where Oppenheimer lived, and lots of old pictures of daily life in the city. I'm fascinated by the stories of kids who lived at Los Alamos during the war--but that was another one of those subjects I just couldn't get into because of space!

BKL: Oppenheimer had deep concerns about the atomic bomb after the war. In the epilogue, you challenge readers to think about the implications of the bomb on global warfare today. What do you hope readers will take away from this "warning"?

SHEINKIN: The main thing is just to be aware that these weapons are out there, and that we're going to have to decide what to do with them.

BKL: Could you tell us about any memorable correspondence and feedback that you have received from young readers and teachers who have read your book?

SHEINKIN: Well, a few librarians have told me young readers have come into the library and asked where they can find plans for building an atomic bomb. That's not quite the reaction I was looking for, but at least they're engaged with the material!

BKL: You are a former textbook writer. How do you compare writing nonfiction for young readers to writing content for textbooks?

SHEINKIN: Wow, there's no comparison. Writing for textbooks is about checking off a list of names, dates, topics--mentioned that, mentioned that, said that, now ask a review question. Writing narrative nonfiction is about telling stories. You're still trying to get across lots of information, but the goal is to do it through an entertaining narrative. I'm convinced the narrative approach is not only more fun for readers but more effective as well, since stories are much easier to remember than lists.

BKL: Do you think that informational books for youth are evolving in response to the recently established awards focused just on nonfiction and with Common Core's emphasis on nonfiction in the classroom?

SHEINKIN: It may. just be that more people are paying attention to the great nonfiction that's out there (check out the blog Interesting Nonfiction for Kids, where many of the best writers post: inkrethink.blogspot.com). The awards are a great incentive, but to be honest, I don't pay much attention to the Common Core stuff. I've read enough standards to last a lifetime. I just want to tell stories.

BKL: What are you working on now?

SHEINKIN: I'm just finishing up a new book, set for publication in January 2014. It's called The Port Chicago Fifty, and it's a WWII civil rights story about a group of young African American sailors who stand up against segregation in the military. It's not a famous story at all, but it's very dramatic and, I think, an important one for people to know.

The Common Core State Standards calls for more emphasis on reading informational texts. Although Steve Sheinkin's Bomb is an excellent curriculum resource, students who read the book learn to appreciate that nonfiction tells stories, and that through these stories, a reader grows to understand the world in which we live. The activities below correlate to the Common Core State Standards and expand the knowledge that students gain from reading Sheinkin's title as well as related resources.

In the Classroom: After students have read Bomb, have them read the mission of the Atomic Heritage Foundation (www.atomicheritage.org/index.php/about/about-us.html). Lead a class discussion about the projects in which the foundation is currently involved. Then have them write a report that the director of the foundation presents to the board, aligning the foundation's projects with its mission statement. Encourage peer editing for clarity and grammar.

* CCSS.ELA-Literacy.RI.7.1. Cite several pieces of textual evidence to support analysis of what the text says explicitly as well as inferences drawn from the text.

* CCSS.ELA-Literacy.RI.7.2. Determine two or more central ideas in a text and analyze their development over the course of the text; provide an objective summary of the text.

* CCSS.ELA-Literacy.W. 7.8. Gather relevant information from multiple print and digital sources, using search terms effectively; assess the credibility and accuracy of each source; and quote or paraphrase the data and conclusions of others while avoiding plagiarism and following a standard format for citation.

In the Classroom: Ask students to listen to the stories of people who worked on the Manhattan Project (www.atomicheritage.org). Why are oral histories so important? Instruct students to write a paragraph about each person that sums up his or her contribution to the project that might be included in the museum or library of the Manhattan Project National Historical Park.

* CCSS.ELA-Literacy.SL.7.2. Analyze the main ideas and supporting details presented in diverse media and formats (e.g., visually, quantitatively, orally) and explain how the ideas clarify a topic, text, or issue under study.

* CCSS.ELA-Literacy.W.8.2. Write informative/explanatory texts to examine a topic and convey ideas, concepts, and information through the selection, organization, and analysis of relevant content.

In the Classroom: Divide the class into small groups and ask them to study the Historical Walking Tour Map of Downtown Las Alamos (www.losalamoshistory.org/O9walking%20tour.pdf). Then have them become tour guides for a walking tour of Los Alamos. Project the map on a screen, and ask each group to provide a narrative for their tour. Encourage them to provide a bibliography of books and websites they used in gathering information.

* CCSS.ELA-Literacy.WHST.6-8.8. Gather relevant information from multiple print and digital sources, using search terms effectively; assess the credibility and accuracy of each source; and quote or paraphrase the data and conclusions of others while avoiding plagiarism and following a standard format for citation.

* CCSS.ELA-Literacy.SL7.1. Engage effectively in a range of collaborative discussions (one-on-one, in groups, and teacher-led) with diverse partners on grade 7 topics, texts, and issues, building on others' ideas and expressing their own clearly.

In the Classroom: Sheinkin says that he didn't have space to write about the children who were reared in the "secret cities," such as Los Alamos. Allow students to work as partners and read a novel like Ellen Klages' The Green Glass Sea or Paul Zindel's The Gadget, and ask them to interview the main characters as adults. What are the characters' perspectives on their childhoods? How do they view the enormity of the project and the implications on global warfare in the twenty-first century? Tape the interviews and post them on the school website or SchoolTube.

* CCSS.ELA-Literacy.RL7.9. Compare and contrast a fictional portrayal of a time, place, or character and a historical account of the same period as a means of understanding how authors of fiction use or alter history.

After 36 years as a school librarian, Pat Scales is a freelance writer and children's literature advocate.

The novels and informational titles listed below will support student research and classroom units about the Manhattan Project.

In 1945, 13-year-old Stephen Orr joins his father, a physicist, in Los Alamos, New Mexico, and is unprepared to deal with the mystery of the top-secret world in which he must live.

It's 1943, and 10-year-old Dewey Kerrigan joins her father, a scientist, in Los Alamos. She knows very little about "the gadget" that occupies the time of the adults, but she finds the dump a perfect place to find parts for a radio that she is building.

Set in 1955 in a small California town, this novel's four seventh-grade boys investigate a professor from a nearby university who worked on the Manhattan Project.

The personal story of Feynman, the man who was involved in building the atomic bomb, constructing the first computers, and figuring out why the space shuttle Challenger crashed, appeals to young readers, even when the science may be too difficult for them.

This biography of the man who led the research at Los Alamos, the secret city where the atomic bomb was made, poses social and political questions about the ramifications of such a powerful war weapon, and the revelation that Oppenheimer had connections with the Communist Party.

Documented with black and white photos of key scientists of the Manhattan Project, this book chronicles the scientific discoveries that led to America's development of nuclear weapons.

Covering both history and science, this account of the development of the atomic bomb reveals the thousands of people in three top-secret towns it took to produce what became known as the Manhattan Project.

Los Alamos, New Mexico, is considered the epicenter for the Manhattan Project, but this historical account introduces Oak Ridge, Tennessee, where enhanced uranium was manufactured, and Hanford, Washington, where bomb-ready plutonium was developed.