When it was announced in 2007, Ecuador's Yasuni ITT-Initiative to protect an area of the Amazonian rainforest from oil drilling was hailed as a historic conservation effort. Ecuadorian President Rafael Correa said he wouldn't allow oil extraction in parts of Yasuni National Park if international donors agreed to reimburse Ecuador for half of the lost revenues of the estimated 846 million barrels of oil underneath the forest. Environmentalists called the idea "unprecedented."

Six years later, the only adjective that fits is "unsuccessful."

In August, Correa announced he was abandoning the initiative after fairing to come up with the $3.6 billion he was asking for to protect the 2.5 million-acre rainforest, which is a UNESCO Biosphere Reserve. Ecuador had only managed to attract $13 million in donations and another $116 million in pledges.

Then, in early October, the Ecuadorian Congress approved drilling in two concessions in the park, a biodiversity hotspot that is supposed to have more tree and insect species in a single hectare than in all of the US and Canada combined. The park is also home to two Indigenous tribes, the Waorani and the Taromenane, that live in the forest in voluntary isolation.

Environmentalists say the failure to fund the Yasuni Initiative rests on Correa. They say the government's 2008 default on its international debt, combined with mixed messages from the president's office, sowed doubts among international donors. President Correa, meanwhile, blames the international community. "It was not charity that we sought. It was shared responsibility in the fight against climate change," he told a national television audience when announcing the end of the initiative. "Sadly, we have to say that the world has failed us."

Ecuadorian environmentalists are now gearing up for a last-ditch effort to save the park--a national referendum to put Yasuni off-limits forever. Organizers have six months to collect the signatures of 680,000 Ecuadorians (five percent of the population) to hold a plebiscite on the fate of Yasuni. If the issue goes to a popular vote, it would be a major test of Ecuadorians' commitment to preserving their Amazonian terrain. Past public opinion polls showed that 80 percent of Ecuadorians were in favor of the Yasuni Initiative. But that support may be eroding as the government runs frequent television and radio spots promising that any drilling will use the latest technology to limit environmental impacts--and promises that drilling monies will be used to fund schools and hospitals. The government gets about half of its revenue from the petroleum industry. 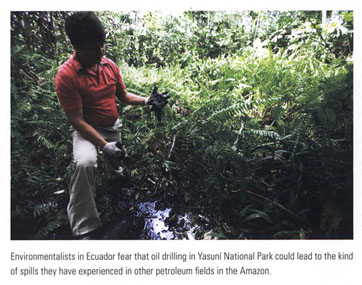 "The government has plenty of resources to position its message, and it has great capacity to move the public, but we are confident on this issue," says Esperanza Martinez, president of the Ecuadorian group, Accion Ecologica. "The amount of information that exists and the number of people who believe in conserving Yasuni will give us positive results [in the referendum]."

There are good reasons to be optimistic that voters might support closing Yasuni to oil drilling. Ecuador is the only country in the world with a constitution granting legal rights to ecosystems. And the country's large and influential Indigenous population has a deep respect for nature.

Alberto Acosta, who unsuccessfully challenged Correa in this year's presidential election and who was one of the main backers of the rights-of-nature campaign, is urging Ecuadorians to take the long view. "The oil will run out," Acosta says. "Sooner or later, we will have to face that challenge."