Cider has been getting a more significant presence at the show, mirroring the categor/s overall nationwide explosion--it grew by about 50 percent in 2013. Its profile was raised significantly by Anheuser-Busch, whose Johnny Appleseed cider offering made its big debut at the show, two weeks prior to its April 7 launch. And, as one would expect, the company spared no expense with an enclosed apple-themed pavilion complete with nonstop sampling and an ice sculpture logo as the venue for its coming-out ball.

"This is the first new brand, completely new, not a line extension, that A-B has done since 2008," notes Nicole Yoder, brand manager for Johnny Appleseed. A-B previously had leveraged its Stella Artois and Michelob Ultra trademarks for its earlier forays into the cider market. The company is targeting legal-drinking-age millennials who are looking for something sweeter. "They're looking for something that has a little bit of a stronger ABV, so we're at five and a half percent with that perfect balance of sweetness and apple intensity," Yoder continues.

The company was serving Johnny Appleseed over ice.

"It's really about bringing out the flavor," Yoder explains.

MillerCoors has had considerable success in the cider category since it bought the Crispin brand just over two years ago. Crispin and its sister brand, Fox Barrel pear cider, have been part of Millercoors' specialty Tenth & Blake portfolio, but its new launch, Smith & Forge is positioning itself not so much as a craft-like brand, but a more mainstream product targeting a very mainstream demographic: specifically 21-29-year-old men. Though some research has suggested that cider enjoys a 50-50 split between men and women, MillerCoors contends that males have been underserved by the segment. Even the name, company reps say, drives home the product's maleness. 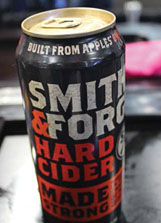 It's packed in pint tall-boy aluminum cans with a black, burnt orange and stainless steel-ish silver color skeem with a very bold font in all caps. Its logo is two intersecting sledge hammers and it bears the tagline, "Made Strong in the Fine Tradition of Making Things Strong."

CiderBoys Brand Gets to the Point

The big brewers might have had the massive budgets for true biggest booths to promote their ciders, but the smaller players were able to hold their own at the show. Wisconsin's Stevens Point Brewery launched the CiderBoys brand in late 2012. "We're focusing on fruitful pairings--taking different fruit and apple pairings together and winding up with products that work well in the trade," says Stevens Point director of sales Bryan Wygert. Varieties include First Press Traditional Hard Apple Cider, Magic Apple Strawberry, Cranberry Road, cinnamon-infused Mad Bark, Peach County and Raspberry Smash.

Among the non-cider products at the Nightclub & Bar Show, you could say attendees got a look into the future--the 23rd century to be exact. Calgary, Alberta, Canada-based Federation of Beer is the license holder for Star Trek-themed beers. "What we do is audition different breweries," says Federation of Beer marketing director Richard Weger. "We have a concept and we try their beers and then we match the recipes to the concept." Some Klingons were on hand to introduce the first offering in the line, Klingon Warnog. Its next launch will be Vulcan Ale, coming by mid-year.

Single-serve ready-to-drink wine brands have been trending lately and among those is Copa di Vino, a single-serve offering that comes in its own glass (well, a glass-like package made from recycled plastic). The product actually has appeared on the reality TV show Shark Tank. "Everything else has been packaged in ready-to-drink for years: beer, soda, coffee, water," points out Copa di Vino's creative director Jim Semlor. "Wine to us was trapped in the bottle. And now we've created a package so you could enjoy wine in more places. You can buy a Copa di Vino for $2.99 and not spend $20 on a bottle and not enjoy [that bottle]. It's providing easy access to wine, but also the ability to enjoy it on the go--the beach, pool, at the barbecue. It's ready to drink without the hassle of a cork, a glass and everything else." Most of the major varietals are available, including Cabernet Sauvignon, Merlot, Chardonnay, Pinot Grigio, Riesling and White Zinfandel.

The Only Thing Common is The Name 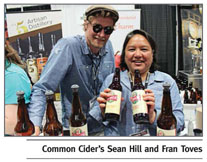 It may have an everyday name, but Common Cider is about to prove that it's anything but. With offerings like Blood Orange and a range of saison-style ciders infused with flavors like hibiscus and lemon, the brand is definitely thinking a little outside the apple box. "Our philosophy is that we take common apples and we make some amazing ciders," says owner Fran Toves. "I'm a foodie so I really wanted to bring in the whole culinary aspect to our ciders."

Crabbie's Comes Out of its Shell

For a beer of a much different kind, there's Crabbie's ginger beer--which is to say it's not a beer at all in the classic sense. It's alcohol ginger beer. "When you say alcoholic ginger beer, people think it's a craft brew with ginger, but this is different," says Jennie Hatton, brand manager for North America at Crabbie's USA. Launched five years ago in the U.K., the brand has been in the U.S. for about two years and unveiled a line extension, Spiced Orange, at the Nightclub & Bar Show. "With the Spiced Organge you're going to have a little less of ginger flavor, a little more of the tangy orange that comes out."