Kerry rolls out chilled kids yoghurt on a stick

Kerry Foods has claimed a "world first" with the launch of a chilled, solid yoghurt on a stick.

An extension of the Cheestrings brand, Yollies roll out to Asda on 14 August under an initial exclusive national listing, to be followed by a wider rollout (rsp: [pounds sterling]2/ four 25g lollies).

Yollies--which come in strawberry, raspberry and apricot flavours--have a soft texture similar to cream cheese and are Kerry Foods' first foray into the branded yoghurt category.

The supplier had made a "significant investment" in equipment to produce the new range, said Kerry Foods' dairy marketing controller Lee Willett. This included patented technology for its "clamshell" packaging, which was designed to keep the lolly fresh throughout the day outside a fridge and features 16 characters, including Vikings and scuba divers.

Willett claimed there had been a lack of innovation in the kids yoghurt category, which Kerry was determined to address with Yollies. "The product is a world first, and follows two years of development," he said. "Our research shows more than 80% of kids who have tried Yollies loved the taste, while 84% of parents said they would buy Yollies for their kids, so we are confident they will unlock a massive new opportunity for retailers." 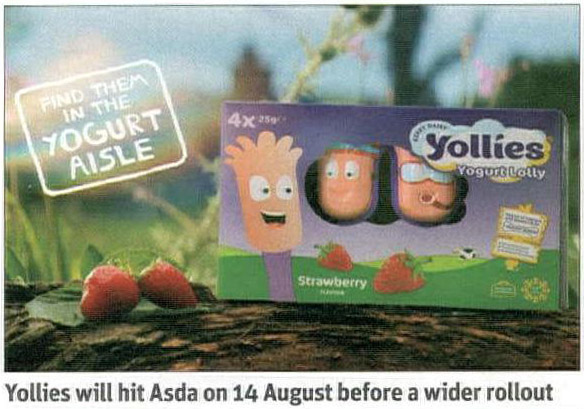 Kerry Foods is also extending Cheestrings into the cheese spreads category this month.

Both Yollies and Cheestrings will be supported as part of a [pounds sterling]5m marketing push that kicked off in July and features the brand's Brave Bones Club.

A dedicated Yollies campaign will hit screens in the new year to coincide with wider distribution of the product.