The dirt on composters: if you dig composting and want a tidy setup, try hiding your heap inside one of these bins or tumblers endorsed by our readers

Gardeners know that the key to beautiful, bountiful beds is to nourish them with compost. This rich "super soil" can defend plants against disease and drought, help supply them with essential nutrients, balance soil pH and more.

According to a recent survey of our Gardening Advisory Group, more than 95 percent of nearly 2,000 respondents already make compost, and 70 percent have at least two piles going. While big, open heaps are the most popular method, more than a third of our readers prepare some of their "black gold" in store-bought composting bins to keep out animals or tidy up their yards. To help you choose the best compost bin for your home, we talked with readers who have tried one or more models. (To join any of our advisory groups, go to www.MotherEarthNews.com/Advisory-Groups)

Bin There, Done That

Stationary composting bins tend to have the largest capacity, typically holding between 10 and 15 cubic feet. Most are made of recycled plastic that's darkly colored to help retain heat. Many also have lids to keep in moisture and keep out critters. Stationary bins are generally open on the bottom so that worms and beneficial microorganisms can get inside to speed up the process. Most stationary bins also have one or two doors for removing the finished compost. Or you can simply lift off the bin and relocate it, forking unfinished material from the top of the old pile back into the bin and exposing the finished compost ready to be used.

How quickly you get compost will depend on your climate, the season, and how involved you choose to be with the composting process. Turning the contents of composting bins can be tough--one downside mentioned by several readers. That isn't a problem if you skip the turning and can wait a little longer for your compost. Even without fussing, most readers report they get a bin full of finished compost within four months of adding the last fresh compostables.

Kitty Werner, a master composter in rural Waitsfield, Vt., accumulates gallons of kitchen waste in large paper shopping bags she keeps on her deck during winter. "The freezing helps it break down faster. By the time we get it into the bins in spring, it goes crazy! Within a month we have compost." Werner doesn't mind mixing and turning with a garden fork to speed things up.

Donna Bates in Raleigh, N.C., loves the design of her Free-Garden Earth compost containers. "The lids screw on, which makes it tough for animals to get in and scatter half-decayed compost all over," she says. "I also have the option of either removing a small amount of finished product from the door at the bottom, or--because the composter is reasonably lightweight--lifting the bin off the finished contents, shoveling the pile into the wheelbarrow and moving it into the garden." Bates' busy schedule doesn't give her time to actively manage her compost, but by keeping two bins going she always has some that's ready to go. Like many readers, she bought her composting bins for a reduced cost from her city's solid waste department. (Bates paid only $45 for each bin!)

Compared with stationary bins, most compost tumblers hold less (about 5 to 12 cubic feet) and cost more per cubic foot at capacity, but they're designed to make turning easier. Load 'em with grass clippings, leaves and other organic waste, moisten the contents, and then give the tumbler a whirl. All that turning is supposed to speed the process, but our reader reviews are mixed.

Readers who love their compost tumblers appreciate their speed and ease of use. Of all the methods Joyce McNally has tried--including worm composters and open heaps--she says her 5-yearold Compost Wizard tumbler is the best compost bin. Although she doesn't always turn it daily, or even weekly, she still gets finished compost in a few months. "The compost seems more uniform than what I get from my stationary bins. The tumbler has 'fins' inside that help stir and mix," she says. McNally, who lives in a rural area near Erie, Pa., also appreciates the tumbler's secure lid, which threads on and off so raccoons and other animals can't get inside.

Rene Hall in Topeka, Kan., says her Mantis tumbler will make three full wheelbarrows of finished compost in each of its two barrels in about a month if she turns it daily and waters properly. "When both of those bins are full, it's hard to turn the contents, but it beats using a fork to turn a pile. The older I get, the more I'm willing to pay for convenience," she says.

Other readers grumble that their compost tumblers are tough to empty or hold too much water. "Mine holds water like a rain barrel," says Christi Moeller in rainy Centre, Ala. "Rain comes in through the perforations, but it doesn't drain out." For her, bins work far better. 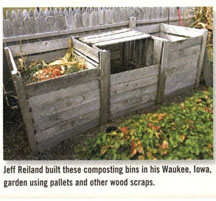 Surveyed readers deemed worm composters the best compost bin type for performance. Red wigglers (Eisenia fetida) are used in worm composters to digest food waste and paper. This species prefers moderate temperatures (between 55 and 75 degrees Fahrenheit). Worm composters are usually placed indoors. Most come with small (16-inch-square) stackable trays; when the worms digest food in one tray, you add another tray above it. Over time, the worms work their way upward while their manure (the finished vermicompost, also called "worm castings") accumulates on the bottom. You'll have usable compost in about three months. Some worm composters also include a spigot for draining off the liquid "tea."

"About every three months, I remove the bottom of the three tiers, and the material is pretty broken down," says John Feeny in Burien, Wash. "I dump that in my outdoor pallet bin, and feed my plants a diluted compost tea." Feeny overwinters the red wigglers in his basement because they won't survive the cold in his area.

Elizabeth Close of suburban Audubon, N.J., loves the quality of the compost from her Uncle Jim's Worm Farm unit. "It's a lot richer and finer than what I get from my compost bins and tumbler," she says. "It doesn't make a large volume, so I'm selective about where I use it. When the worms become too plentiful, I just give them to the chickens for a snack."

More than just a pretty bucket, an indoor composter actively breaks down kitchen waste. The electric NatureMill models heat and aerate food scraps. You add wood pellets, sawdust or coir as a source of carbon to help cook high-nitrogen food scraps and get finished compost in a few weeks. The electricity used is about the same as for a night light.

Rene Hall is a fan of NatureMill, despite the $250 to $400 price tag. "If it ever wears out, I'll buy another in a heartbeat. It runs by itself about once an hour. It isn't loud, nor does it smell when the lid is closed." Barbara Taylor in Sparta, N.J., says keeping bears out of her outdoor bins is hopeless. With her 5-year-old NatureMill, she can transform 10 cups of kitchen waste into ready-to-use compost in about a week.

Bokashi buckets are another way to compost indoors. Based on an ancient Japanese method, bokashi composting uses a packaged blend of microorganisms, bran and molasses to break down food through fermentation. The kits usually include a compost container with a spigot and tight-fitting lid, along with the bokashi blend. You layer food scraps with the blend inside the container. Compost tea can be drained from the spigot. According to the suppliers, you can expect nearly finished compost a few weeks after the bokashi bucket is full. At that point, you can add the fermented waste to an outdoor bin or work it into your garden soil.

Making compost can be a simple as heaping organic waste and letting it rot in its own sweet time. But plenty of other methods fit with a DIY composting mentality.

Wood pallet upcycling. You can get free wood shipping pallets from business loading docks and warehouses. They usually measure about 40 by 48 inches and make nice compost bins. Use several pallets to create a side-by-side, multi-bin system. Pros: sturdy; neat and attractive; free materials. Cons: not animal-proof; some assembly required.

Wired-up compost. Homemade wire bins are simple and easy to assemble using 4-foot-high fencing wire. Arrange them at the diameter you want and wire the ends together. Pros: low-cost; neater than an open pile; easy to relocate. Cons: not animal-proof; longer time to break down if you don't turn.

Ring around the compost. Barbara Taylor in Sparta, N.J., likes to surround her 3-foot-diameter wire-enclosed compost pile with a garden bed. On the outside, she grows vining flowers or crops, then plants flowers or veggies in front of the vines. In fall, she takes down the wire and spreads the finished compost. Pros: feeds plants while it's working; attractive; low-maintenance. Cons: not animal-proof.

Sheet composting. This easy method involves spreading organic materials over garden beds or paths where they can decompose in place--think heavy mulches. In just one year, Christi Moeller of Centre, Ala., transformed dry, sandy soil into lush, productive raised beds by layering oak leaves, kitchen scraps and soilless mix. Pros: easy; no turning; great way to start new beds. Cons: waste can take up to a year to fully break down.

In the trenches. Instead of putting organic material into a container or pile, you can bury it below ground by trench composting. Beneficial microorganisms and worms will do the work for you out of sight and without taking up space aboveground. In Waitsfield, Vt., Kitty Werner sometimes puts unfinished compost at the bottom of raised beds. "It finishes composting on its own, and the plants on top love the warmth and nutrients," she says. Pros: saves space; no turning needed. Cons: labor-intensive digging.