Evaluate the conformation of these 2- and 3-year-old Tennessee Walking Horse geldings and place them in your order of preference. Then see how your choices match up with our expert judge's.

Walking Horses are difficult to judge in photographs because movement is just as important as conformation; a horse should be smooth and gaited in addition to having quality structure. A Walking Horse should also have good bone. A medium-boned horse will have sturdy feet and legs that'll keep him sound without inhibiting movement.

His head should be proportionate with his body and have a straight or slightly convex-nose profile. His neck tie-in should be high, and his neck should be upright. The slope of his shoulder should be at a 45-degree angle from the scapula to the humerus bone. His legs should be more forward-set than is typical for other breeds. This is likely to make travel easier, as the horse will be predisposed to a long, reaching stride. 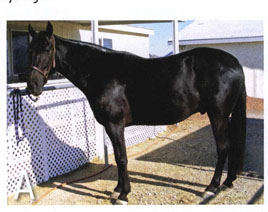 A Walking Horse should have a strong, short back and level topline. Elevated hip height is a major fault in the breed. A horse should also have a longer underline than topline. There should be maximum length from the point of his hip to the point of his hock, with a long hipbone that's set far into his back. He should have a gentle slope to his croup, rather than a flat and level croup, with a high-set tail. He should also have short cannon bones. His front cannons should be perpendicular to the ground, but slight toe-out deviation is acceptable. His rear cannons don't need to be completely perpendicular to the ground. They can have some forward slope, but shouldn't be so angular as to be considered sickle-hocked. Slight cow-hock conformation also isn't as great a fault in this breed as in others. 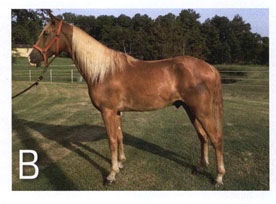 I like his overall balance; it's the most pleasing of the group. He has the most length from the point of his hip to his hocks. He has nice, short cannon bones, which create low hocks. This conformation should predispose him to good hind-end carriage. The biggest differentiating characteristic between this horse and the other two geldings, and which played the greatest role in his placing, is his shoulder's angle and length. It's well laid-back, and the point of his shoulder is toward the front of his body. He'll have a long, reaching stride with this conformation.

Gelding B would benefit with more overall substance. His lightness makes him appear to be long backed, but if you look at the point of his hip, it's clear that his back is of good length, and it's his lack of musculature and body mass that's the issue. He needs more muscle along his topline, his loin, and his neck. I'd like to see denser bone as well, but since he's young and likely still developing, his refinement didn't affect his placement. Though he's thin, he has the most correct conformation. 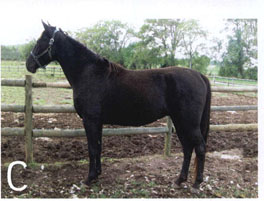 Gelding C has good overall balance and proportion. His neck tie-in to his shoulder is high, and his neck is upright, both positives. He's similar in quality to the first-place horse, but his shoulder doesn't have as much slope, and the point of his shoulder doesn't carry out as far in front of his body. This may inhibit his stride. I really like his back and topline. The pronounced withers and strong appearance of his back are ideal for an under-saddle horse. His underline isn't quite as proportionate as Gelding A's in relation to his topline. He's also not as long or deep through his hip. More length from the point of his hip to his hocks would improve his conformation and rear-end drive. His cannon bones are of adequate length and his hocks are close to the ground. This'll likely enable good rear-end propulsion.

He has an attractive and well-proportioned head and pleasing look. He also has appropriate bone weight and adequate muscle.

He's the most substantial of the three horses, with good weight of bone and muscling. His condition is more show-ready than that of the other geldings. His front legs don't carry straight down from his shoulder, and are instead slightly back. He has a low tie-in of his, neck to his shoulder. The short humerus bone creates this steep-sloped shoulder and low tie-in. His topline appears to be unlevel, though it could be the photo. He's hip-high, which is likely to affect his stride and ability to engage his rear end. He has a lower-grade slope to his hip than the other two horses; more length from the point of his hip to the point of his hock would steepen his hip angle. His cannon bones are adequate, though they could be somewhat shorter. A longer hip and shorter cannon bones would lower his hocks. His rear hock angle is appropriate for his breed. He has a nice, round croup and low tail tie-in.

He has a nice shape to his neck, though it ties in low, and a nice head and ears.

Camp studied animal science at Middle Tennessee State University and is the founder of the Pleasure Tennessee Walking Horse Association of Tennessee. She trains horses and coaches amateur riders at her facility, Canaan Farm, in Franklin, Tennessee.