A picture is worth a thousand words: increasingly, infographics are an effective way to deliver a message of education or engagement

"When it comes to Gen Z, it's the way that they think. It's fast. It's quick," says Dawn Aubrey, associate director of housing and dining services at the University of Illinois at Urbana-Champaign. "Don't bog me down with your dissertation. Just the facts, ma'am."

After learning from housing surveys that students want to get their information more quickly, Aubrey is experimenting with using infographics for both residents and student staff. "The ultimate goal is to have students be more engaged," she says. The graphics Aubrey's team is working on are designed to show how important dining services are to the fabric of the student experience--that it's not just a meal or a job, but part of the overall college experience, "it's also a way to demonstrate our value added," she says.

At the University of Texas at Austin, Food Service Director Rene Rodriguez began using infographics nearly four years ago to educate students in a way that was fun and visually appealing. "Foodservice is no longer just preparing and serving food," he says. "We're doing a lot of educating on what we're doing and why we're doing it."

UT-Austin's designs take many forms--from large posters to trifold table tents, window clings to digital signage. They may show the full journey meat makes from a local farm or the team may isolate a portion to just illustrate the major health benefits of strawberries. " We look at them as an investment," says Kathy Phan, marketing coordinator for UT-Austin's housing and foodservice department. Because creating the designs can be labor intensive (the school hires recent graduates as graphic designers part time), the department aims to maximize the number of ways and places they can be repurposed.

Recently, Phan's team began taking small sections of the infographics and animating them; it posts these 15-second spots on the housing department's Instagram channel and digital menu boards.

While there's no data specifically rating students' reception of the graphics, anecdotal tales suggest they're being appreciated at UT-Austin. "We have received a lot of positive feedback. Some students even have stolen our table tents and taken them up to their rooms," says Phan. "It's bizarre, but it's a compliment."

THE INFO ON INFOGRAPHICS

Percentage by which searches for infographics have increased in a little more than two years. Google reports

It is said cheese making began shortly after the domestication of sheep.

The first cheese factory for industrial production opened in Switzerland.

The wholesale cheese industry was born in Wisconsin.

THERE ARE ONLY 4 CHEESES NATIVE TO THE U.S. 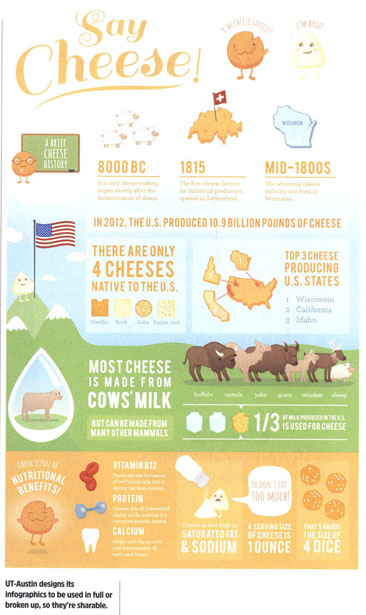 MOST CHEESE IS MADE FROM COWS' MILK

BUT CAN BE MADE FROM MANY OTHER MAMMALS

1/3 OF MILK PRODUCED IN THE U.S. IS USED FOR CHEESE

CHEESE IS FULL OF NUTRITIONAL BENEFITS!

Cheese has all 9 essential amino acids, making it a complete protein source

Helps with the growth and maintenance of teeth and bones

SO DON'T EAT TOO MUCH!

A SERVICE SIZE OF CHEESE IS 1 OUNCE

THAT'S ABOUT THE SIZE OF 4 DICE