Leg yield: use this dressage maneuver to increase your horse's maneuverability and enhance your control in the saddle

A correct leg yield loosens and stretches your horse's muscles and improves his flexibility by asking him to travel on a lateral track--forward and sideways. It's an introductory exercise for lateral training, advancing from the turn on the forehand, that doesn't require bend in the horse's body, so it's easier for the horse to learn to go sideways while keeping his body straight. It promotes balanced self carriage and is a great exercise for getting the horse on the bit, which means driving the horse forward from behind to have contact on the bit rather than pulling with your hands. For the rider, the maneuver hones your aids and teaches you to better coordinate them for the best response.

Here I'll go through the steps to execute a leg yield. Work in the mildest bit to which your horse responds, with two hands on the reins for easy control of the forehand. In these photos, I'm riding with a dressage whip. Like spurs, a dressage whip is an artificial aid that's used lightly to encourage the horse to move away from the rider's leg aid; you could use a riding crop instead. I prefer this to spurs because, without perfect leg position, a spur can get in the way and cause resistance. The dressage whip or crop stays out of the way, unless it's being used to get a response to move away from it when the horse ignores a leg aid.

1 A leg yield begins with correct positioning and balance. Here my horse is traveling at a working jog. I have light contact on the reins and use my seat and legs to drive him forward in what I call "uphill balance," meaning my horse's poll is higher than his withers or topline. This distributes more of my horse's weight on his hind end, allowing him to bring his back up and have a slight roundness to his spine. The gait and his balance are necessary for the impulsion a leg yield requires. My horse's spine is straight from his poll to his dock. To best understand the alignment of the horse's body position, get a view from the front. Have someone video you, straight on, from the ground.

2 My horse is still in this photo to most accurately display what his head will do when I cue for the leg yield to the left. I slightly flex my horse's head at the poll to the right for a leg yield to the left. I hold my hands in front of the saddle, close to my horse's neck--not too high nor pulling on my reins. My hands work in a sideways motion, rather than back toward my body. My seat stays centered in the middle of my horse. Leaning in the opposite direction of the yield (a common error) leads to a poor response from the horse. It's difficult for the horse to move his right front and hind legs to cross due to the additional weight put on the horse's legs by the rider leaning in the opposite direction of travel, thus eliciting very little response. Note that the riding photos execute a leg yield to the right, which requires the opposite positions described here.

3 Here my horse has too much bend in his neck to execute a proper leg yield. I'm pulling back with my right rein, thus the horse overreacts by turning his head too far to the right and bending his neck. My left rein is too loose, allowing the horse's neck to bend and his shoulders to go left. With this position, the horse will bulge or lead with his left shoulder. It'll be too far ahead of the horse's body for straight alignment; thus, he can't cross his legs evenly with a far-reaching step.

4 By establishing a target of where I want to go as I ask for a leg yield to the right, I gain a place to direct my eyes, which helps me keep my upper body from collapsing. The target also serves as a point of reference: If I get there too soon, my horse's feet probably aren't crossing properly; if I don't get there at all, then I didn't have enough sideways to my yield. For a leg yield to the right, as shown here, the maneuver has two beats: the first is the front legs crossing, left over right; and the second beat is the hind legs crossing, also left over right. The pair of legs is moving on the same diagonal track, with both left legs crossing in front. The sequence of aids for a leg yield to the right is the left leg sends the horse sideways to the right, the right neck rein keeps the shoulders straight in line with the hips, the right leg keeps the horse's body straight and forward, and the left rein is mostly passive and only flexes the horse's head to the left. 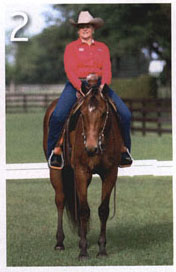 5 This demonstrates an incorrect leg yield. The horse's neck is over-bent, and his shoulder is too far to the right. To fix this, I'd ride forward and straight to start over again. Then I'd emphasize the right neck rein to more actively keep the right shoulder from bulging and be less active with my left rein. The most common problem is using a left rein to achieve a yield to the right. It's not a rein yield; it's a leg yield, and thus leg aids are more active to get the response. 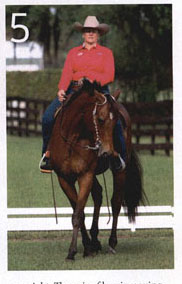 6 The opposite problem is the horse leading with his hips, as shown here. The horse over-responds to the rider's leg aid, which pusnes the horse's hips in front of shoulders on path of travel. To correct that, the rider should soften with the left leg, add some right leg to support straightness, and add the left neck rein to bring the forehand more to the right. An open right rein allows the shoulders to align slightly in front of the hips.

7 Here I'm not achieving enough lateral movement for a leg yield. My horse doesn't respond to my leg aid; instead, he's using his energy to go forward and straight. This horse isn't bulging out to one side, like in Photo 5, but he's leaning and not crossing his legs to get lateral movement. To fix this, first I need to check my own position and that I'm keeping a long leg, with my heel down, rather than my calf muscle shortened with my heel up. I'll then ask for a working walk and test whether he'll move away from my left leg. If he won't, then I'll use my dressage whip to reinforce my leg cue to move him sideways. If he continues to move straight ahead, I'll use a close-and-release motion in my right fingers around my reins to keep him from walking straight forward and move his energy sideways. The sideways motion comes from the leg aid, and the rein aid reinforces that. Once he gets it at the working walk, we'll return to the working jog, and advance to the working lope when he's ready. 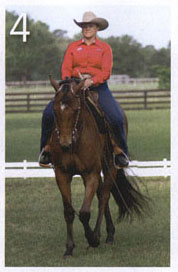 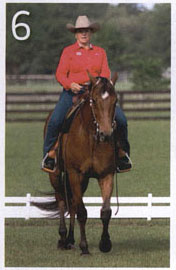 Lynn Palm, Ocala. Florida, has provided sound horsemanship advice to riders of all disciplines for more Pittion-Rossillon, Palm conducts clinics across the U.S. and abroad, as well as at their own Fox Grove Farm. Learn more at lynnpalm.com. 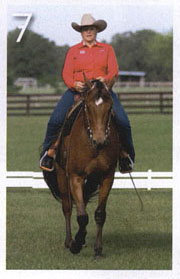