Kids have it easy these days, goes the familiar complaint--and it's wrong, says Jalen Rose, the retired basketball star. "It's harder now," he insists. "You know how certain adults feel, the older they get, the longer the walk was to school? Well, I don't feel like that. These young people have more challenges in front of them than we could have imagined. Everything's in their face: sex, drugs, violence, gangs, and it's happening at a warp speed on social media."

Rose knows about growing up tough. Born and raised in Detroit, he never met his father. His mother sometimes couldn't afford to turn on the heat in the winter. Crime was everywhere. Rose found his salvation through basketball, becoming famous as a player. He now works as a basketball analyst on TV.

Yet he also keeps an office beside a small auditorium at the Jalen Rose Leadership Academy, a high school that he opened in his hometown four years ago. It's a charter school, which means that it operates without many of the regulations that hobble traditional public schools. The teachers aren't unionized, for example. Parents and students choose to attend the JRLA--they're not assigned there by the local government. "The quality of your public education shouldn't be defined by your zip code," says Rose.

When Rose founded the JRLA, he made a point of putting it in the same zip code he lived in as a kid. "These days, almost any family that has a prayer of making it to the suburbs moves out of the city," he says. "Our kids are the ones who couldn't make it out." Last June, the JRLA graduated 98 percent of its first class, with 92 of its 94 students headed for college, a trade school, or the military. This compares with a graduation rate of about 71 percent in Detroit Public Schools, which reported in October that two-thirds of its students are "chronically absent." If the JRLA continues to show its current level of success, Rose could become one of the country's most powerful voices in the movement for charter schools and educational choice.

A generation ago, almost nobody would have predicted this result. Rose was part of the University of Michigan's "Fab Five," perhaps the most famous freshman class in the history of NCAA basketball. He was a tall point guard who played in the championship games of 1992 and 1993. His team earned a reputation for baggy shorts and trash talking and left an indelible mark on the sport. In 2011, when ESPN released a film on the team (co-produced by Rose), it became the most-watched documentary ever aired on the channel.

Yet rumors of scandal always seemed to lurk nearby. As a student, Rose once was arrested for loitering--he was playing video games at a friend's house, the police showed up, and they discovered that one of his buddies had crack. When Rose played on the road that season, he had to endure chants of "Crack house!" and "Just say no!" In 2002, following an investigation that connected several players to the financial schemes of a booster, the University of Michigan took down the 1992 and 1993 Final Four banners it had hung from the rafters of Crisler Arena and agreed to a series of other sanctions. Rose was cleared of any wrongdoing but once again suffered from the taint of association.

He was drafted into the NBA in 1994, and went on to become a key member of a very good Indiana Pacers team that might have won a title if Michael Jordan hadn't been playing at the same time. When he retired in 2007, Rose had scored more than 13,000 points in his career.

While he was still in the NBA, he endowed a scholarship to the University of Michigan, with preference given to "students from an inner city," as the school's financial-aid office puts it. Through a separate charitable fund, he awarded $10,000 college scholarships to 19 high-school graduates. Yet he also wanted to go back to his old neighborhood in northwest Detroit and do more.

That's when the idea of opening a charter school came to him. In a memoir published in October, Got to Give the People What They Want: True Stories and Flagrant Opinions from Center Court, Rose describes his approach to challenges: "When the things in front of you in life reveal how messed up the system is, you lose faith in the system pretty quickly," he writes. "You develop a contrarian attitude. Your instinct is to disagree with the status quo, and then, if you can, to try and shake it up."

Hearing this passage read back to him in his office, Rose leans forward. "Charter schools are absolutely an example of that. They're independent. They're the opposite of public schools." Then he pauses. "I totally respect educators. We should pay them all double. But there are so many cases where teachers get tenure. You teach a few years and before you know it, you can put your foot on the desk and in theory collect a paycheck forever. At charter schools, you have to be accountable for your job every day. Your outcomes are challenged every day. The good teachers don't mind that. They love that. We're here to serve the kids, not the other way around. I think that's kind of gotten lost in a lot of public-school models."

Charter schools are financially independent from local school districts. The JRLA, for example, is authorized by Central Michigan University's Governor John Engler Center for Charter Schools, a group named for the Republican who pushed for Michigan's charter-school laws in the 1990s. Charter schools receive about $7,200 per student from the state, just as conventional public schools do. Yet they can't add to this sum through local taxation, which means they have to raise money separately for their facilities and other expenses.

"When you start a public school, they gift you a building," says Rose. "We didn't get gifted a building." Instead, he raised the money for it and acquired a maroon-bricked building that once had housed a public elementary school. 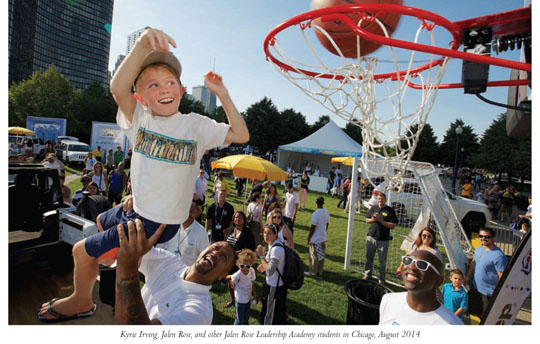 The inaugural class of students--120 ninth-graders--arrived in the fall of 2011. Their reading and math skills were on average at the fifth-grade level, in a pattern that has continued since. "We've got to catch them up by the time they're seniors," Rose says.

His formula involves small class sizes and a five-member "college-success team" that helps students apply to a minimum of nine colleges each and then tracks them even after they've graduated from high school. "We want to make sure they get through college," he says. The JRLA operates on a "9-16 model," meaning that it begins with ninth-graders and keeps tabs on students until they finish college, when they've completed their 16th year of schooling.

At the JRLA, school days stretch from 7:30 a.m. to 4 P.M., and the school year lasts eleven months. "How do we expect these kids to compete in a global economy when they're out of school in June and not going back until September?" asks Rose. "That's a quarter. Tell me a business or a profession where you can take a quarter off and be better. It doesn't happen." The JRLA's school year runs from September through June. "If you pass all of your classes, you have an internship or a college experience in July. If you fail a class, you have summer session." He lets the kids have August off.

"An idle mind is the devil's playground," says Rose. "We've got to keep them active, keep them disciplined, keep them focused. Each day they go to school for eight hours and sleep for eight hours. That next eight hours is going to determine their destinies." The JRLA offers after-school clubs for chess and debate as well as a full range of sports, even though its gym doubles as a lunchroom and is too small to host home games.

The JRLA currently enrolls 419 students. They wear uniforms. When they encounter Rose in the hallways, they treat him with respect--he's "Mr. Rose"--but not with awe. They're used to seeing him around.

When Rose was launching his school, he caught the eye of Kevin Chavous of the American Federation for Children, a leading advocacy group for school choice. Chavous had served on the city council of Washington, D.C., where he helped develop a school-choice program for low-income families. The Obama administration and its teacher-union allies have tried to defund it, but Republicans in Congress have managed to keep it alive.

"School choice has become such a partisan issue, with everyone feeling like they have to pick a side," says Chavous, a Democrat. "We need to find trusted voices--clergy, entertainers, athletes--who can break through." He met with Rose and they hit it off. Rose now volunteers for the AFC and has recorded a public-service announcement for the organization.

"I'm totally for school vouchers," says Rose. "Those with financial means have the opportunity to move to a community that has a good school district. But if I'm a tax-paying citizen and there's a dropout factory two miles from my house and I don't want to send my son or daughter there, I should be able to take those funds and put my son or daughter anywhere I choose, just like those with means do."

Rose knows that talking about politics and education reform may get in the way of his job as a basketball analyst, but he doesn't care. "With the exception of Magic [Johnson] and AIDS, name one black superstar athlete of that generation or later who's made it a top priority to do something with his platform and bring real attention (and money) to a cause that means something to him. I can't think of any," he writes in his book. "Let's face it, if you're an elite basketball player and you choose to be socially and politically active, it could harm your brand."

By speaking out on school choice, Rose--who has donated to the presidential campaigns of Democrats as well as to the Democratic National Committee--faces this problem. How does he handle the flak from fellow Democrats who oppose school choice? "I think my sports background helps me deal with it. I'm used to being at Michigan State and sitting on the S at center court after we win and having to get to the locker room without the fans throwing bottles and stuff at me," he says.