Kissinger had a hand in `dirty war': declassifed documents reveal the former secretary of state turned a blind eye to human-rights violations during Argentina's crackdown on terrorism in 1976. (Investigative Report)

Newly released U.S. documents obtained by INSIGHT show that in 1976 Secretary of State Henry Kissinger played a key role in assuring Argentina's military rulers that their antiterrorist campaign involving the disappearance, torture and assassination Of at least 15,000 people -- many of whom were not combatants -- would not be criticized by the United States on human-rights grounds.

The documents, which cover events between June and October of that year -- the period of some of the most intense repression in Argentina -- show that the military regime was "convinced that there was no real problem with the United States over the issue." The Argentine foreign minister, Adm. Cesar Guzzetti, drew that conclusion after meetings in October 1976 with Kissinger, Vice President Nelson Rockefeller and other top State Department officials, according to a U.S. Embassy cable.

The new documents provide a detailed look at the bitter dispute about U.S. support for a military dictatorship and include a rare example of an ambassador daring directly to oppose Kissinger, one of the most powerful figures in postwar U.S. history.

U.S. Ambassador Robert Hill described Guzzetti as "euphoric" and "almost ecstatic" and "in a state of jubilation" after returning from Washington to report on the meetings to Argentine President Jorge R. Videla. According to Hill, who since has died, "[Guzzetti] said the vice president urged him to advise President Videla to `finish the terrorist problem quickly.'"

Hill, in contrast, showed barely concealed outrage that his superiors in Washington were undercutting his efforts to encourage human-rights improvements. His three-page cable, dated Oct. 19, 1976, had the effect of putting "bitter criticism" of Kissinger's handling of the meetings with Guzzetti on the record, according to a memo by another U.S. official who recommended an immediate response.

Hill quoted Guzzetti as saying Kissinger "had assured him that the United States `wants to help Argentina.' "Kissinger told Guzzetti "that if the terrorist problem was over by December or January, he [the secretary] believed serious problems could be avoided in the United States," according to Hill's cable. A reply to Hill from Kissinger's chief Latin American officer claimed Guzzetti "heard only what he wanted to hear" and had arrived at his interpretation "perhaps [because of] his poor grasp of English."

Hill, in a carefully phrased "comment" ending the cable to Washington, veils his criticism of Kissinger by speaking only in terms of Guzzetti's impressions of the meetings. But, significantly, Hill seems to stress that Guzzetti received the same message from a total of five top U.S. officials in four separate meetings, and Hill does not raise the possibility that Guzzetti misinterpreted what he heard in those meetings.

Guzzetti's meetings in Washington, coming just six months after the coup against the constitutional left-wing government of Isabel Peron, took place at a critical time in Argentina. Before Guzzetti traveled to the United States, Hill forcefully told him that the continuing atrocities could not be defended. In the view of the United States, Hill recalled in a subsequent cable to the State Department, dated Sept. 20, 1976, having told Guzzetti that "murdering priests and dumping 47 bodies in the street in one day could not be seen in context of defeating the terrorists quickly; on the contrary, such acts were probably counterproductive. What the USG [U.S. government] hoped was that the GOA [government of Argentina] could soon defeat terrorists, yes, but do so as nearly as possible within the law."

Guzzetti went to the United States "fully expecting to hear some strong, firm, direct warnings on his government's human-rights practices," Hill wrote after meeting with the Argentine leader upon the latter's return to Buenos Aires. "Rather than that, he has returned in a state of jubilation, convinced that there is no real problem with the United States over this issue. Based on what Guzzetti is doubtless reporting to the GOA, it must now believe that if it has any problems with the U.S. over human rights, they are confined to certain elements of Congress and what it regards as biased and/or uninformed minor segments of public opinion."

Hill ended the cable on a pessimistic note: "While this conviction exists, it will be unrealistic and ineffective for this Embassy to press representations to the GOA over human-rights violations."

The documents are part of thousands of pages of secret archives on U.S.-Argentine diplomacy that were declassified following a visit by then-secretary of state Madeleine Albright to Buenos Aires in 2000, during which she promised their release. The cables cited in this article were obtained by INSIGHT in anticipation of their public release.

Just days after returning from his two-week stay in the United States, Foreign Minister Guzzetti told Hill that the clear impression he had received -- in contrast to what he was being told by the embassy -- was that the primary concern of the U.S. government was not human rights but, rather, that the Argentine regime get the terrorist problem solved quickly.

According to the documents, Assistant Secretary Harry Shlaudeman, a key Kissinger aide, said he agreed that more representations by Hill "would not be useful at this point."

The recently declassified documents provide for the first time a complete record of the apparent double message the Argentine military received from U.S. policymakers. They also are the first contemporaneous confirmation of the exchange between Kissinger and Guzzetti, which in the past was the motive for dispute and denial by the former secretary and his associates. Furthermore, they shed light on the confidential actions of the conservative Hill, who the documents show tried unsuccessfully to halt the massacre, both by means of multiple private representations to the Argentine military and in a series of cables to Kissinger and his aides in Washington.

Ironically, left-wing Argentine journalists and historians have tried to paint Hill in a sinister light by attempting to compare what happened in Buenos Aires in 1976 with what is known to have happened three years earlier in neighboring Chile, where a CIA-backed coup overthrew the elected Marxist president Salvador Allende. However, to date there is no evidence whatsoever that the United States either directed or promoted the coup against Peron's government, generally considered on all sides to have been incompetent and corrupt. 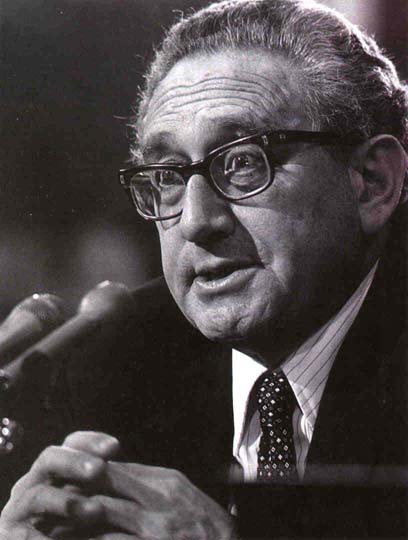 Hill, a businessman-diplomat, had been appointed by President Richard Nixon as envoy to Buenos Aires in 1973. He had married into the politically conservative W.R. Grace family, which had extensive business interests in Latin America. He had served as ambassador in Costa Rica during the time of the 1954 CIA-sponsored coup in Guatemala as well as in subsequent posts in Mexico, El Salvador and Spain.

"Hill's biography reads like a satirical left-wing caricature of a `yanqui imperialist,' noted the muckracking newsletter Latin America. "He has long-standing connection with the United States security and intelligence establishment."

In private Kissinger, too, lampooned portrayals of Hill as a human-rights campaigner. "The notion of Hill as a passionate human-rights advocate is news to all his former associates," Kissinger wrote in 1988 in a private letter obtained by INSIGHT. Kissinger's rendition of Hill runs counter to the testimony of several U.S. diplomats and law-enforcement personnel who served with him in Buenos Aires, and to that of Juan de Onis, the New York Times correspondent in Argentina in 1976, all of whom attest to the conservative envoy's rights activism. And Hill's policy received strong support from U.S. Sen. Jesse Helms (R.-S.C.), another Kissinger foe who met with the ambassador and Videla in Buenos Aires in July 1976, Capitol Hill sources tell Insight.

An early version of the conversations in which Kissinger is shown to have given a green light to the repression in Argentina was published in October 1987 by The Nation, a magazine on the political left. The principal source for that article was a memorandum from Patricia Derian, then assistant secretary of state for human rights, in which a conversation she had in early 1977 with Hill was outlined. Derian's memorandum spoke of a first meeting between Kissinger and Guzzetti in June 1976 following the annual meeting of the Organization of American States in Santiago, Chile.

"The Argentines were very worried that Kissinger would lecture to them on human rights," according to the Derian memorandum. "Guzzetti and Kissinger had a very long breakfast, but the secretary did not raise the subject. Finally, Guzzetti did. Kissinger asked how long it would take ... to clean up the problem. Guzzetti replied that it would be done by the end of the year. Kissinger approved. In other words, Ambassador Hill explained, Kissinger gave the Argentines the green light.... Later ... the ambassador discussed the matter personally with Kissinger [who] ... confirmed the conversation."

In The Nation article Kissinger's spokeswoman denied Hill's claims. Deputy Assistant Secretary for InterAmerican Affairs William D. Rogers, who attended the Santiago meeting with Kissinger and Guzzetti, said that he did "not specifically remember" a meeting with Guzzetti, but added that Kissinger would have told his Argentine peer that the military should carry out the fight against terrorism "without abandoning the rule of law."

Shlaudeman rebutted Hill's criticisms in a memorandum the Kissinger aide sent to the high-flying diplomat the day after receiving Hill's critical cable in October 1976. The views of Shlaudeman, who later served as U.S. envoy to Buenos Aires during the military governments of Roberto Viola and Leopoldo Galtieri, were expressed in an "action memorandum" titled "Ambassador Hill and Human Rights in Argentina." The exchange shows the intensity of the dispute between Hill and Kissinger.

"Bob Hill has registered for the record his concern for human rights in a bitter complaint about our purported failure to impress on Foreign Minister Guzzetti how seriously we view the rightist violence in Argentina," Shlaudeman wrote to Kissinger. "I propose to respond for the record."

The declassified documents suggest that Kissinger did not continue to respond personally to Hill. However, in a cable approved by Kissinger personally and dated Oct. 20, 1976, Shlaudeman claimed that Guzzetti may have misunderstood the message he had received because of his "poor grasp of English." Shlaudeman suggested that, "as in other circumstances you have undoubtedly encountered in your diplomatic career, Guzzetti heard only what he wanted to hear.... Guzzetti's interpretation is strictly his own."

Shlaudeman, referring to the luncheon he had with Guzzetti, wrote: "The `consensus of the meeting' on our side was that Guzzetti's assurances that a tranquil and violence-free Argentina is coming soon must prove a reality if we are to avoid serious problems between US." 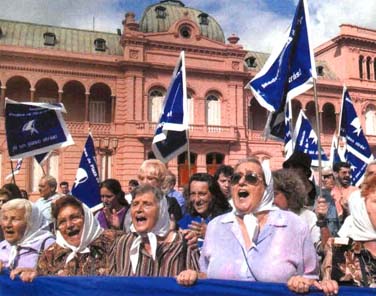 However, Shlaudeman did not offer a correction of Guzzetti's understanding of his meetings with Kissinger and Rockefeller, and he did not authorize Hill to rectify Guzzetti's interpretations of any of the meetings as a necessary element for pressuring the military. "With respect to your closing admonition about the futility of representations" he told Hill, "we doubt that the GOA has all that many illusions. ... In the circumstances, I agree that the Argentines will have to make their own decisions and that further exhortations or generalized lectures from us would not be useful at this point."

Just as Hill feared, the massive atrocities committed by the military regime continued far beyond the end of 1976 and, by the time Kissinger's policy finally was reversed, it was too late to stanch the bloodshed.

MARTIN EDWIN ANDERSEN IS THE AUTHOR OF DOSSIER SECRETO: ARGENTINA AND THE MYTH OF THE DIRTY "WAR" AND A FORTHCOMING BOOK, WRITTEN IN SPANISH, ON THE HISTORY OF THE ARGENTINE POLICE (1880-1999). HE ALSO IS THE AUTHOR OF THE ARTICLE MENTIONED ABOVE IN THE NATION. JOHN DINGES, A PROFESSOR OF JOURNALISM AT COLUMBIA UNIVERSITY IN NEW YORK CITY, IS THE AUTHOR OF ASSASSINATION ON EMBASSY ROW ON THE LETELIER CASE, AND THE FORTHCOMING THE CONDOR YEARS.