Games have always been an important part of Abenaki culture. Boys began to race when they were small. Handball and lacrosse were popular games for the Abenaki.

The Abenaki liked to sing and tell stories as they did their daily chores. They also enjoyed riddles and word games. They danced and sang at most social events, such as marriages, funerals, and the first corn harvest of the year.

When conflicts broke out with other peoples, the Abenaki war chief would stand before the tribe with a red club in his hands. He would ask for volunteers to unite for the fight. Then, the men feasted and danced well into the night. Before the battle, warriors painted their faces red and drew pictures of past battle victories on their bodies.

Around the time of puberty, an Abenaki boy went on a vision quest. Alone in the woods, he fasted for many days. Then, he waited for the guardian spirit who would guide him through life to appear. Males were considered adults by age fifteen. Some girls also went on vision quests.

When a young man wanted to marry, he sent gifts to his intended bride to entice her into marriage. If she refused the gifts, it meant that she rejected the proposal. If she and her parents agreed, the couple lived together for a trial period. They were supervised by chaperones and had to follow strict rules.

The bodies of dead Abenaki were dressed in their finest clothing, wrapped in birch bark, and tied with a cord. They were buried quickly so that their spirits would not linger over the village. Food was put in the grave for the deceased person's journey to the other world. Also in the grave were weapons, tools, and personal items to use in the afterlife.

In the 1980s, the Abenaki Indians of Vermont fought in court for the right to hunt, fish, and travel on their traditional lands. In 1992, the Vermont Supreme Court ruled that all of these Abenaki rights had ended. The Vermont Abenaki continued to fight. In the late 1990s, the General Assembly of Vermont recognized the tribal status of the Abenaki people. The tribe's next goal is to gain recognition by the U.S. government. When the federal government recognizes a group of Native Americans as an Indian tribe, they are granted the right to hunt and fish on their homeland. The tribe also receives better health care and educational benefits.

Joseph E. Bruchac III, Ph.D. (1942–), is an author and poet whose works reflect his Native American heritage. His books have won many awards. He has also written many stories for children.

A Penobscot named Louis Francis Sockalexis (1871–1913) was the first Native American to play professional baseball. He was an outstanding hitter for the Cleveland Spiders. In 1915, the Cleveland team was renamed the Indians in his honor. (In the 1980s and 1990s, many Native Americans protested the use of Indian names in sports as demeaning.)

Samoset (1590–1653) was a chief who lived on an island off the coast of present-day Maine. He served as a go-between for the Pilgrims and Native American groups. Samoset helped to create the first peace agreement between whites and the Wampanoag tribe. 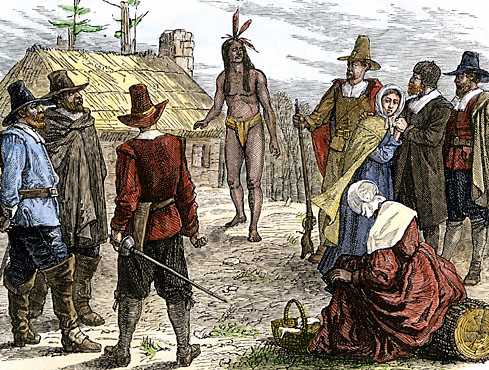