The Montgomery bus boycott was a mass protest by African American citizens in the city of Montgomery, Alabama, against SEGREGATION policies on the city’s public buses. It was nine years before the CIVIL RIGHTS ACT OF 1964 would change the nation forever. But in 1955, when ROSA PARKS refused to give up her seat on a public bus to a white man, she was arrested and jailed for violating state segregation laws. She did not realize at the time that her actions would have an immediate effect on other members of the African American community and a lasting effect on the national history of CIVIL RIGHTS . The resultant massive boycott lasted for 11 months. It ended in late 1956 when the U.S. Supreme Court ruled that public bus segregation (the case involved the City of Montgomery) was unconstitutional. Browder v. Gayle, 352 U.S. 903.

Several of Rosa Parks’ friends were members of the Women’s Political Council (WPC), an organization of black professionals founded in 1946. As early as 1953, WPC members had been actively pursuing changes in bus segregation law through communications with Mayor W.A. Gayle. They requested that black persons be allowed to sit from back toward front and whites from front toward back until a bus was filled. They also demanded more bus stops located in black residential communities. When the talks produced little result, WPC president Jo Ann Robinson sent a final letter to the mayor in May 1954, advising that plans were being made to ride less, if at all, on the buses.

Notwithstanding waning use of the public bus system by Montgomery’s black citizens, it was Rosa Parks’s actions on December 1, 1955, that ignited a more organized boycott. Following her arrest, WPC members prepared a leaflet 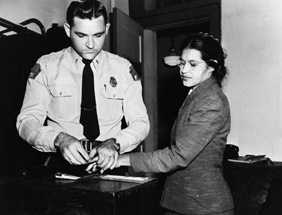 Rosa Parks’s refusal to give up her bus seat to a white man on December 1, 1955, sparked the 11-month long Montgomery Bus Boycott. -

and made thousands of copies to distribute through local churches the following Sunday. They asked for a show of support for Rosa Parks in a one-day boycott of the city’s buses. On December 5, 1955, 90 percent of Montgomery’s black citizens avoided use of the public buses.

Wanting to capitalize on the momentum, church ministers in the area quickly mobilized and organized the Montgomery Improvement Association as the flagship entity to lead a formal boycott. The ministers elected 27-year-old newcomer, MARTIN LUTHER KING JR ., as the spokesperson for the new organization. Formal demands were made to the city and the bus company. African Americans wanted more courteous service, black bus drivers hired for the black routes, and a first-come, first-served (but still segregated) rider policy.

To punctuate the seriousness of the protests, Montgomery citizens (black and white) formed what was locally referred to as a “taxicab army.” They refused to ride the public buses and instead walked to their destinations or hailed taxicabs driven by African Americans. As part of the boycott, the taxi drivers had agreed to charge a reduced rate of ten cents per person, equal to the public bus fare. When riders began sharing taxicab fares and riding together in the same direction, city officials declared it illegal. In response, people began donating their own vehicles to transport riders. Others began volunteering their services as drivers for those who needed to travel farther than they could walk. By the end of the first week, more than 20,000 black citizens of Montgomery were getting rides to work through the Montgomery Improvement Association.

In February 1956, city officials obtained an INJUNCTION against the boycott and used a 1921 law prohibiting the hindrance of a bus as grounds to arrest 156 protesters. Martin Luther King Jr. was also arrested, convicted, and ordered to pay fines. Ultimately, Fred Gray, a young black Montgomery attorney, filed an action on behalf of a group of black citizens. He sought a DECLARATORY JUDGMENT finding Alabama’s state statutes and Montgomery city ordinances unenforceable and unconstitutional under the FOURTEENTH AMENDMENT to the U.S. Constitution. The laws and ordinances required separate accommodations on any commercial vehicle operated by any motor transportation company within the state of Alabama and the city of Montgomery. The bus company, in response, had alleged that segregation on privately owned buses was valid under the laws.

A three-member federal panel struck down the laws, finding the 1954 Supreme Court ruling in BROWN V. BOARD OF EDUCATION (repudiating a “separate but equal” principle) applicable to city buses. The U.S. Supreme Court upheld the decision, and the successful boycott ended in major victory.