Brown v. Board of Education of Topeka

Brown v. Board of Education of Topeka

Brown v. Board of Education of Topeka (I), 347 U.S. 483 (1954), hereafter referred to as Brown, was a decision by the U.S. Supreme Court that invalidated racially segregated schools as unconstitutional. The case came to the Court as part of a litigation campaign by the Legal Defense and Educational Fund of the National Association for the Advancement of Colored People (NAACP), established to bring legal challenges to racial segregation in public and state-funded facilities. Decided by the Warren Court, the ruling served as an impetus for the civil rights movement and its attack on the Jim Crow system of racial separation and subordination, and as a spur to congressional civil rights legislation during the early 1960s. The Court's decision would establish the Warren era as a period of liberal judicial activism, and it served as an endorsement of a broadly progressive vision of equality under the Constitution and Bill of Rights.

The Social and Political Context of the Case

Brown was a challenge to the Jim Crow system of “separate but equal” that had been in place in the American South following Reconstruction. Despite the passage of Amendment XIV and its guarantee that no state could deprive a person of equal protection of the law, the former Confederate states established discriminatory legislation that officially separated whites and blacks, although on terms of superficial equality. The Supreme Court first endorsed the provision of “equal but separate accommodations for the white and colored races” in 1896 in the case of Plessy v. Ferguson, 163 U.S. 537, which upheld Louisiana's racial segregation of railroad passengers. Legally compelled segregation in public facilities would continue through the next half century and expand to public accommodations, housing, recreational facilities, voting, military service, and schools. In all cases, the courts turned a blind eye to what were obviously laws enacted for the purposes of humiliating and debasing American citizens of a particular race. Jim Crow segregation was a legally created and enforced system of subordination that treated African Americans as second-class citizens.

Challenges to these Jim Crow laws and to the ideology of racial segregation began in the early twentieth century with antilynching, black workers, and “Negro” emancipation movements, and they continued in mid-century with the efforts by NAACP lawyers to address the segregated public school systems that were the foundation and central support of the entire structure of legalized injustice. Black plaintiffs were recruited as test subjects to contest states' provision of separate but equal facilities in education. Page 62  |  Top of ArticleAn incremental litigation strategy was utilized: first they would dispute the equality of racially separate institutions, and second they would seek to dismantle the system of legal segregation entirely.

By the time of the Brown litigation, NAACP-sponsored lawsuits had successfully challenged the unequal nature of segregated law schools and graduate schools, but not the validity of the “separate but equal” formula itself. One of the prominent black attorneys in this campaign was Thurgood Marshall, who would be appointed as a justice of the Supreme Court in 1967. In crafting arguments to fight against segregation in public elementary and secondary schools, the NAACP attorneys faced this question: Would the Supreme Court finally retract the principle of separate but equal, or would it construe the requirement of equality so strictly that segregation in practice would be constitutionally impossible? If separate schools were, by definition, unconstitutional, it would be difficult to defend racial segregation in other sectors of public life. This would weaken the legal underpinnings of the social structure of a great part of the American nation. A bold legal strategy was decided upon, entailing a frontal challenge to the doctrine that racially separate facilities can ever be made equal; this challenge implied a claim that such facilities are fundamentally unconstitutional.

Background to the Case and the Court's Consideration of It 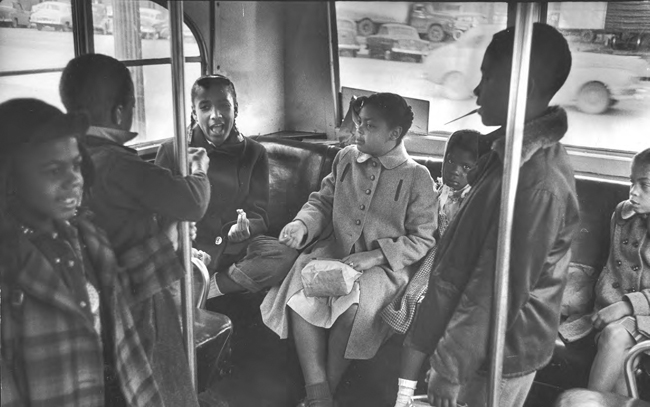 The Supreme Court first heard arguments in a group of public school segregation cases in the 1952 term, but the justices were unable to reach a decision. The Page 63  |  Top of Articlecases were set for reargument during the 1953 term, with the installation of a new chief justice, Earl Warren. The Court also took the unusual step of requesting that attorneys provide answers to a long list of questions concerning the historical meanings of Amendment XIV, and concerning the kind of orders that the Court should issue if it found a constitutional violation.

The Board of Education of Topeka, Kansas, became the lead case of a group that included 17 states and the District of Columbia. The plaintiff was Linda Carol Brown, an eight-year-old black girl whose family lived in a predominantly white neighborhood a short distance from an elementary school. The Topeka Board of Education mandated that its elementary schools be racially divided, but the Browns did not want their daughter sent to the distant school reserved for black students. Their suit challenging the segregated school system as violating their daughter's rights under the equal protection clause was unsuccessful at trial, and on appeal the Browns were joined by parties from four other suits against segregated public schools, in Delaware, South Carolina, Virginia, and the District of Columbia. The decision in Brown affected thousands of public school districts concentrated primarily in the Southern and border states, and the precedent the case would set would be extended to other areas and other institutions as well.

Chief Justice Warren understood the significance of the Court's ruling, and he also understood that such a momentous and potentially contentious decision must come as a unanimous opinion. Yet some members of the Court were sympathetic with the school districts' position, and they questioned whether the abolition of segregation could be justified on judicial grounds. Historical research, based in part on intra-court memorandums, reveals that Warren lobbied hard to persuade certain justices—namely Stanley Reed, Robert Jackson, and Felix Frankfurter—to fully join the Court's holding and not file separate opinions that might diminish the legal and rhetorical force of the decision by weakening the institutional force of the Court's mandate.

The Opinion of the Court

Chief Justice Warren's opinion for the Court was relatively brief but eloquent, phrased in ordinary language and with great reliance on social science data presented to the justices about the practical effects of racial segregation in education. Warren was frank in acknowledging the patently unequal nature of black schools in terms of their resources and facilities, but he was clear in stating that the Court's decision could not turn on merely a comparison of “tangible” factors but had to examine the impact of segregation on public education itself. Education, the most important function of state and local governments, was the very foundation of good citizenship, and thus essential to the capacity of any child to succeed in modern society.

Although Warren did not formally overrule Plessy, he was emphatic in declaring that “in the field of public education, the doctrine of ‘separate but equal’ has no place,” and that “separate educational facilities are inherently unequal.” This was partly because of the imposition upon black children of practical barriers to achievement in life, but more significantly because of the stigma of inferiority that separation inevitably inflicts on those whom society deems lowly and inadequate. By perpetuating stereotypes of racial inferiority, segregation perpetuated the circumstances upon which racial stereotypes fed. Warren stressed that the harm of racial separation was that it allowed one race to enjoy full communal life in society while ostracizing and degrading members of another race. Racial segregation was found to stand for and support white supremacy, a regime utterly at odds with equal protection of the law.

The closing paragraph of the Brown opinion asked the attorneys to return the next year and argue the issue of remedies. Deciding how to end the practice of segregated public schools and what would replace it was left to subsequent court rulings. In the 1955 decision that would begin to formulate decrees, commonly referred to as Brown II (349 U.S. 294), a second unanimous opinion by Warren laid out a plan for the implementation of the constitutional principle enunciated in 1954. Brown II set the stage for public school desegregation battles that would dominate the national agenda for the next decades. This was partly because, by acknowledging the need for flexibility in dismantling Page 64  |  Top of Articleseparated schools in local situations of astounding variety, the Court set no timetable but ordered that desegregation take place “with all deliberate speed.” Compliance by reluctant local school boards, under recurring remedial supervision by federal district courts, would be a long and complicated process.

The Implications of Brown for Racial Equality and Nondiscrimination

Brown is often considered to be the Supreme Court's most significant decision of the twentieth century. The immediate public reaction to the ruling, however, was resistance, especially in the South. Editorials in Southern newspapers set the mood, articulating collective indignation of Southerners over the apparent abrogation of states' rights by the federal government through the Supreme Court. Defiance of such aggressive judicial action, abridging the rights of states and localities to manage their own schools, prompted the issuance of the “Southern Manifesto.” Introduced on the floor of the Senate by Georgia Democrat Walter George in March 1956, the document pledged to prevent the forcible implementation of the Brown decision. Southern jurisdictions closed schools, moved schools, or delayed the integration of existing public schools in order to circumvent the Brown ruling. When, in 1957, Gov. Orval Faubus of Arkansas openly defied court orders to allow black students to attend the all-white Little Rock High School, President Eisenhower ultimately ordered a military response, sending in the National Guard to force compliance. The state's resistance to federal authority would result in the 1958 ruling in Cooper v. Aaron, 358 U.S. 1, which affirmed that state officials are bound by the Supreme Court's pronouncements on the meaning of American federalism.

Despite the contemporaneous campaigns to “impeach Earl Warren” that it engendered, the Brown case also had a substantial long-term and reconstructive effect on American politics. The Supreme Court during the Warren years became an active participant in the political struggle for equality in American society, supervising individual civil liberties and protecting minority civil rights. Brown's constitutional holding was a central prop of the campaign against racial discrimination in America. Its legacy was not uncomplicated: for some Brown stood for the principle of a color-blind Constitution, while for others its recognition of the subordination in the Jim Crow system was a call for racially remedial policies such as affirmative action. Brown remains a landmark decision, both for its assertion of the Supreme Court's power in our constitutional democracy, and as a legal and moral statement of our constitutional aspirations.

Kluger, Richard. Simple Justice: The History of Brown v. Board of Education and Black America's Struggle for Equality. New York: Alfred A. Knopf, 1976.