Located in southwest Asia (the Middle East), Iran, comparable in size to the state of Alaska, covers an area of 628,000 square miles. Deserts constitute a large portion of this area, and two major mountain ranges, Alburz and Zagros, cover about 50 percent of the entire land. The Caspian Sea in the north, Persian Gulf in the south, and more than a dozen major rivers throughout the country are its main water resources. Iran shares borders in the north with the Republics of Armenia, Azerbaijan, and Turkmenistan; in the east with AFGHANISTAN and PAKISTAN; and in the west with IRAQ and TURKEY. Its capital city is Tehran, near the Caspian Sea in the north.

Iran is an ancient country with more than 2,500 years of recorded history. The Greeks called it Persia after the southwestern region Fars, which was the home of the founders of the Achaemenian dynasty (559–330 B.C.E.). The Achaemenians established a powerful and sophisticated Persian empire in the ancient world. The Sassanian dynasty (224–651 C.E.) was the last Persian empire before the Muslim Arab conquest that began in 637 and was finalized by 651. Within two centuries of the conquest, Islam had largely replaced Zoroastrianism, which had been the ancient religion of Persia and the official religion of the Sassanian Empire. Iran remained mostly Sunni until the coming of the SAFAVID DYNASTY (1501–1722), which patronized TWELVE-IMAM SHIISM and made it the official religion of the state. In the 19th century, Britain Page 363  |  Top of Articleand Russia competed for influence in Iran, thus exposing it to increased Western influence.

The CONSTITUTIONAL REVOLUTION of 1905–11 declared the advent of modernity by challenging the absolute rule of the monarch. At the same time, William Knox D'Arcy, a wealthy English investor, discovered OIL in southwestern Iran in 1908, and in 1909, the Anglo-Persian Oil Company was founded. This company was renamed the Anglo-Iranian Oil Company in 1935, and it became British Petroleum in 1954. Oil revenues helped finance Iran's modernization during the 20th and 21st centuries.

The Pahlavi monarchy (1925–78) emerged as a result of the social and political turmoil of the constitutional era. The first Pahlavi monarch, REZA SHAH PAHLAVI (1878–1944) established a despotic, centralized modern state. Emulating what MUSTAFA KEMAL ATATURK (d. 1938) was doing in Turkey in the 1920s, he sought to introduce modern industry and implement economic and social reforms. It was during his reign, also, when the country's ancient name Persia officially became Iran, a name based on Aryan, the name of an ancient Indo-European people. In time, due in part to the impact of oil wealth, the Pahlavis produced drastic economic and cultural discrepancies among the people. In 1941, Reza Pahlavi was deposed by British and Soviet forces who occupied the country fearing he would become an ally of Nazi Germany. They replaced him with his young son, MOHAMMAD REZA SHAH PAHLAVI (r. 1941–78), who allowed Iran to become a close ally of the United States after World War II. In 1951, nationalist democratic elements were strengthened by the election of Muhammad Mossadegh (d. 1967) as prime minister. When he moved to nationalize Iranian oil production, British and American covert operatives arranged for him to be removed from office in 1953, thereby strengthening the Shah's hold on the country. During the 1960s, with U.S. support, he introduced the White Revolution, a large-scale modernization program that surpassed anything his father had done. This program angered elements of the Iranian populace, especially the Shii religious authorities, the traditional merchant class (the bazaaris), and leftists. 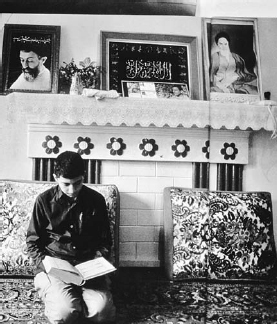 Pahlavi rule was brought to an end in 1979 as a result of massive public demonstrations and national strikes that were held for more than a year. The demonstrators were ordinary people from all walks of life and varied political and religious affiliations. Their undisputed demand was democratic rights and an end to the Pahlavi monarchy. This notwithstanding, the religious faction of the revolutionary movement under the leadership of Ayatollah RUHOLLAH KHOMEINI(1901?–89) established itself as the state authority by eliminating opposition groups and intellectuals who posed a challenge to them and by holding a national referendum that imposed a choice between monarchy and an Islamic Page 364  |  Top of Articlerepublic. The constitution of the Islamic Republic of Iran, adopted in 1979, is organized on the basis of Islamic law (SHARIA) and gives supreme authority to the Shii leader (faqih, religious jurist). The constitution describes the responsibilities of the three branches of the government (the legislative power, the executive power, and the judiciary power), while emphasizing that their operations are subject to the authority of the leader and the guardian council. Any attempt to introduce social change through legal and parliamentary channels and by means of public participation in national referenda is accordingly monitored by the authority of the religious elite who rule Iran.

Revolutionary Iran has had to contend with a number of serious crises since the 1979 revolution. The first arose when revolutionary youths seized the American embassy in Tehran and took its personnel hostage for 444 days in 1979–80. This ended with the release of the hostages and the closing of the U.S. embassy in 1980. The United States proceeded to penalize Iran by launching an economic embargo as part of a policy of containment to limit its influence in the region. In September 1980, Iran was invaded by Iraq, which, under the leadership of SADDAM HUSAYN (r. 1968–2003), sought to gain control of access to the Gulf through the Shatt al-Arab waterway and to check the spread of Khomeini's Shii revolution to Iraq and other Arab Gulf countries. To the surprise of many, Iranians rallied to halt the invasion, but a bloody nine-year war of attrition ensued that resulted in the deaths of as many as a million Iranians and Iraqis. The war ended in a cease-fire brokered by the United Nations. Iran's troubles continued in the 1990s, with a rapidly growing population, economic stagnation, growing demands for liberalization by the postrevolution generation, corruption, political chaos in neighboring Afghanistan, and the proliferation of nuclear weapons in Israel, Pakistan, and India. At the same time, however, Iran encouraged radical Shii groups to take up arms against Sunni-led governments in Iraq, SAUDI ARABIA, Kuwait, and Bahrain. It also supported HIZBULLAH in LEBANON, a Shii guerrilla movement that had formed when Lebanon was invaded by Israel in 1982.

A short-lived period of cultural liberalization occurred in 1998–2002, represented by such figures as Muhammad Khatami (b. 1942), who served as president from 1997 to 2005, Abd al-Karim Soroush (b. 1945), a philosopher and intellectual critic of Islamic radicalism, and human rights activist Shirin Ibadi (b. 1947), who won the 2003 Nobel Peace Prize. The liberal currents these figures represented were especially popular with women and young Iranians, but they were strongly opposed by hard-line supporters of the revolutionary Shii ideology of Khomeini and his successors. This party regained significant popular support when U.S. president George W. Bush identified that country as part of an “axis of evil” responsible for terrorism around the world. Reactionary elements were further energized when the United States and Britain invaded neighboring Iraq to remove Saddam Husayn in 2003. The invasion helped bring about the election of Mahmoud Ahmadinajad (b. 1956), the hard-line former mayor of Tehran, as president in 2005. His government played an active role in supporting Shii political groups in post-Saddam Iraq, opposing Israel, and seeking close ties with Syria. Also, under his leadership, Iran accelerated efforts to become a nuclear power, which provoked the United States and European countries to take diplomatic and military countermeasures.