Malocclusion is a misalignment in the way the upper and lower sets of teeth fit together in biting or chewing. The word malocclusion literally means “bad bite.” The condition may also be referred to with such terms as irregular bite, misaligned teeth, crossbite, underbite, or overbite. 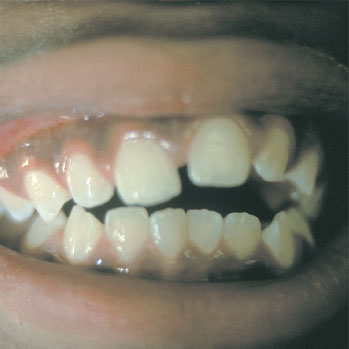 American dentist and orthodontist Edward Angle (1855-1930) was the first scientist to classify malocclusion.

Most humans have various tiny degrees of malocclusion, with most problems being handed down from generation to generation (hereditary). Their problem is not very noticeable and does not usually need to be treated. However, others have more serious forms of malocclusion; often times require orthodontic or surgical treatment.

Occlusion refers to the alignment of teeth, specifically the way that the upper set of teeth fit slightly over the lower set of teeth. Malocclusion occurs when there is a misalignment of these two sets of teeth. The cause may be due to the differing sizes of the upper and lower jaws, or possibly due to the jaw in relationship to the size of the teeth. Within the problem, the teeth may appear crooked, crowded, or protruding teeth. It may affect a person's appearance, speech, and/or ability to eat.

Three different classes of malocclusion generally occurs. They are:

Malocclusions are most often inherited, but may be acquired. Inherited conditions include too many or too few teeth, too much or too little space between teeth, irregular mouth and jaw size and shape, and atypical formations of the jaws and face, such as a cleft palate. Malocclusions may be acquired from habits like finger or thumb sucking (or pacifier use), tongue thrusting, premature loss of teeth from an accident or dental disease, and medical conditions such as enlarged tonsils and adenoids that lead to mouth breathing.

They may also occur due to incorrectly fitting dental fillings, appliances, retainers and other devices worn on the teeth. Other causes include an abnormal structure to the face, pain or other discomfort while biting and chewing, and difficulties with speaking or breathing.

Malocclusions may be symptomless or they may produce pain from increased stress on the oral structures. Teeth may show abnormal signs of wear on the chewing surfaces or decay in areas of tight overlap. Chewing may be difficult.

Malocclusion is most often found during a routine dental examination. A dentist will check a patient's occlusion by watching how the teeth make contact when the patient bites down normally. The dentist may ask the patient to bite down with a piece of coated paper between the upper and lower teeth; this paper will leave colored marks at the points of contact. When malocclusion is suspected, the dentist will commonly refer the patient to an orthodontist for further diagnosis and treatment. The orthodontist will take photographs and x rays of the face and mouth for further study. To confirm the presence and extent of malocclusion, the orthodontist makes plaster, plastic, or artificial stone models of the patient's teeth from impressions. These models duplicate the fit of the teeth and are very useful in treatment planning.

Even though most people have minor forms of malocclusion, such cases are rarely treated by a medical professional. However, when it is more serious malocclusion may be remedied by orthodontic treatment; orthodontics is a specialty of dentistry that manages the growth and correction of dental and facial structures. Braces are the most commonly used orthodontic appliances in the treatment of malocclusion. Such measures are used to Page 1384  |  Top of Articleposition teeth into a more normal alignment. According to the U.S. Bureau of Labor Statistics, about 5,000 orthodontists are practicing in the United States in 2008. At any given time, approximately 4 million people in the United States are wearing braces, including about 800,000 adults.

Braces apply constant gentle force to slowly change the position of the teeth, straightening them and properly aligning them with the opposing teeth. Braces consist of brackets cemented to the surface of each tooth and wires of stainless steel or nickel titanium alloy. When the wires are threaded through the brackets, they exert pressure against the teeth, causing them to move gradually.

Invisalign is an alternative to traditional braces and can also be used to correct malocclusion. Invisalign is a series of clear aligners that are worn to shift and straighten teeth gradually. Each aligner is custom made for the wearer and changed every two weeks to slowly shift teeth into correct alignment.

Braces are not removable for daily tooth brushing, so the patient must be especially diligent about keeping the mouth clean and removing food particles which become easily trapped, to prevent tooth decay. Crunchy foods should be avoided to minimize the risk of breaking the appliance. Hard fruits, vegetables, and breads must be cut into bite-sized pieces before eating. Foods that are sticky, including chewing gum, should be avoided because they may pull off the brackets or weaken the cement. Carbonated beverages may also weaken the cement, as well as contribute to tooth decay. Teeth should be brushed immediately after eating sweet foods. Special floss threaders are available to make flossing easier.

If overcrowding is creating malocclusion, one or more teeth may be extracted (surgically removed), giving the others room to move. If a tooth has not yet erupted or is prematurely lost, then the orthodontist may insert an appliance called a space maintainer to keep the other teeth from moving out of their natural position. In severe cases of malocclusion, surgery may be necessary and the patient would be referred to yet another specialist, an oral or maxillofacial surgeon.

Once the teeth have been moved into their new position, the braces are removed and a retainer is worn until the teeth stabilize in that position. Retainers do not move teeth, they only hold them in place.

Orthodontic treatment is the only effective treatment for malocclusion not requiring surgery. However, depending on the cause and severity of the condition, an orthodontist may be able to suggest other appliances as alternatives to braces.

There are some techniques of craniosacral therapy that can alter structure. This therapy may allow correction

Braces—An orthodontic appliance consisting or brackets cemented to the surface of each tooth and wires of stainless steel or nickel titanium alloy. Braces are used to treat malocclusion by changing the position of the teeth.

Impression—An imprint of the upper or lower teeth made in a pliable material that sets. When this material has hardened, it may be filled with plaster, plastic, or artificial stone to make an exact model of the teeth.

Occlusion—The way the upper and lower teeth fit together in biting or chewing.

Retainer—An orthodontic appliance that is worn to stabilize teeth in a new position.

Space maintainer—An orthodontic appliance that is worn to prevent adjacent teeth from moving into the space left by an unerupted or prematurely lost tooth.

of some cases of malocclusion. If surgery is required, pre- and post-surgical care with homeopathic remedies, as well as vitamin and mineral supplements, can enhance recovery. Night guards are sometimes recommended to ease the strain on the jaw and to limit teeth grinding.

Depending on the cause and severity of the malocclusion and the appliance used in treatment, a patient may expect correction of the condition to take two or more years. Patients typically wear braces 18 to 24 months and a retainer for another year. Treatment is faster and more successful in children and teens whose teeth and bones are still developing. The length of treatment time is also affected by how well the patient follows orthodontic instructions. When malocclusion is corrected, it usually reduces the risk from tooth decay, along with helping to relieve undue pressure on the temporomandibular joint (TMJ), which can cause TMJ disorder (TMD). However, then treatment is applied to someone with malocclusion, specifically with braces, there may be some discomfort during the treatment. Irritation of the gums and mouth may result from the appliances on the teeth. Sometimes chewing or speaking may be adversely affected.

In general, malocclusion is not preventable. It may be minimized by controlling habits such as finger or thumb sucking. An initial consultation with an orthodontist before a child is seven years old may lead to Page 1385  |  Top of Articleappropriate management of the growth and development of the child's dental and facial structures, circumventing many of the factors contributing to malocclusion.