Alice Waters is an American chef and restaurateur who was among those credited with pioneering California cuisine, also called New American cuisine. Born in 1944, Waters opened the restaurant Chez Panisse in Berkley, California, in 1971. The restaurant focused on using fresh, organic ingredients and had a fixed menu that changed based upon what was available at its peak freshness. The focus on freshness and organic produce, as well as developing relationships with farmers and purveyors, laid the groundwork for the New American cuisine. Waters is also a notable member of the Slow Food movement, which is an organization that seeks to protect and educate about regional cuisine, as well as enhance the relationship between the food service industry and farmers and local specialty purveyors, such as cheese makers, bakers, or wine makers.

Alice Waters learned to cook while she was studying abroad in France, earning a degree in French Cultural Studies from the University of California at Berkley in the late 1960s. She opened Chez Panisse after finishing college. Initially, it operated as a collaborative effort with the intention of having a place where Waters could cook for her friends. When purchasing supplies for Chez Panisse, Waters found that most of what was available was not of the same quality as the meat and produce she was able to get at farmers' markets while she was in France. In search of satisfactory supplies, she began contacting farmers and specialty food producers directly, building direct relationships with them. Eventually, Waters was able to obtain all organic ingredients at their peak of freshness, all from local farms and purveyors.

Chez Panisse became popular due to Waters' unique cooking style, which is referred to as a “fusion” style because it combines influences from many different cuisines. Additionally, her cooking style focuses on the flavor of every ingredient used, which is why she attempts to procure the best, freshest ingredients possible. By avoiding any ingredients that do not meet this criteria, the finished dishes are all intensely flavorful, as well as prepared in an innovative style. However, the extreme selectiveness with which she chooses her ingredients restricts what she can offer on a given night, which is why she serves a fixed menu. Not allowing the diners to choose their own meals was an unusual method when introduced, but was an inextricable element of a meal at Chez Panisse because the menu relied so heavily on locally sourced food.

As well as using techniques from varied cuisines, Waters' cooking focuses on lighter dishes. Instead of the cream-and roux-based sauces of classic French and Haute Cuisine, Waters favors lighter sauces such as vinaigrettes. It is this move toward lighter, fresher fare that has become the hallmark of California, or New American, cuisine. Rather than roux, sauces are thickened with pure starches such as cornstarch or via reduction, which means to cook a sauce slowly so the water evaporates out, and the sauce becomes thicker. Brighter, sharper flavors are also favored, so vinegars and citrus are popular ingredients.

New American cuisine spread out from California to the rest of the country with remarkable efficacy. In a matter of years, one could see the techniques and flavor concepts of Alice Waters and other chefs in California becoming common in restaurants all across the United States.

Chez Panisse has been a famous restaurant for many years. Waters received the prestigious James Beard Foundation award for Best Chef in America in 1992, and Chez Panisse has received numerous accolades, including being named the best restaurant in America Page 44  |  Top of Articleby Gourmet magazine. Many cooks who worked under Waters went on to become notable chefs in their own right, some continuing to contribute to the creation of California cuisine. One example is Californian chef Deborah Madison, who after working for Waters went on to open The Greens restaurant, which is a renowned vegan and vegetarian restaurant in San Francisco, California.

FIXED MENU: A style of restaurant service in which instead of having a list of dishes from which the diner can choose, there is only one list of courses that every diner receives.

ORGANIC: Organic refers to food that is produced using only natural techniques. Organic food cannot be produced or grown with pesticides, hormones, industrial fertilizers, antibiotics, or any other chemicals. Instead, organic farmers use techniques such as natural fertilizers and crop rotation.

REDUCTION: Thickening or intensifying the flavor of a liquid by evaporation.

ROUX: A cooked mixture of flour and butter, used as the base for many sauces in classic French cuisine. 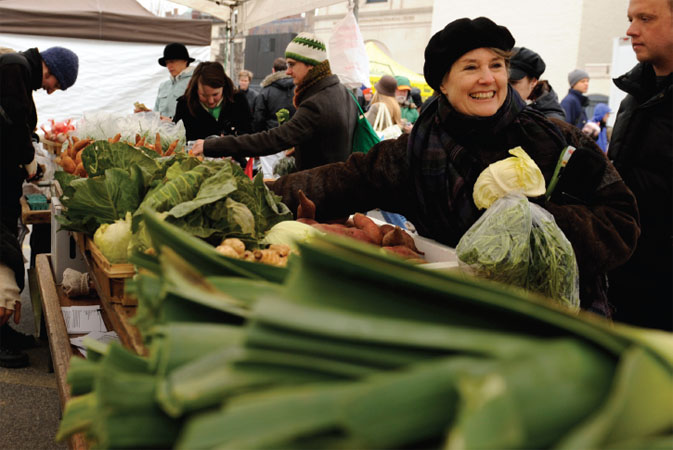 Alice Waters, the executive chef and owner of Chez Panisse in Berkeley, California, looks over the produce at a farmer's market in Washington, 2009. Waters has been advocating the use of seasonal, local food since the 1960s. AP Images.

In addition to her work with the Slow Food movement, Waters has been an outspoken figure in the drive to improve the quality of food served in public schools. To that end, she started the Edible Schoolyard program, in which schoolchildren grow, harvest, and prepare organic ingredients for their lunches; as well as the School Lunch Initiative, which sought to bring healthier food to the Berkley school district in which Chez Panisse is located.

While Waters pursued organic food and continues to be an outspoken proponent for its attributes, there remains a controversy in the food service industry as to organic food's benefits. Although there is evidence that organic techniques are better for the environment and, in the case of certain growth hormones and pesticides also creates healthier products, organic food does Page 45  |  Top of Articlenot necessarily result in better tasting or more nutritious food. Also, in comparison to traditionally grown produce, organic fruits and vegetables are markedly more expensive due to the fact that organic techniques generally produce less yield per acre than traditional techniques. There is sometimes public pressure on restaurants to use more organic ingredients, but in certain situations it is not a feasible alternative for restaurants when fresh, in-season, and well-grown produce from a farm or purveyor may be a better option both in price and in the interest of the final dish.

Organic food has also come into controversy concerning the legitimacy of foods claiming to be organic. In the United States, the term was not regulated until 2002, when the United States Department of Agriculture passed legislation that the term could not be used to describe food that did not meet certain organic requirements. Throughout the world, enforcement of the term often comes into question, with some critics asking if foods that claim to be organic are actually grown or raised that way. Though there are pros and cons to organic methods, the term itself is a relatively recent addition to the restaurant and food marketing lexicon and as such will continue to spark controversy as more legislation is passed in various countries.