An urban farm is more than just a backyard garden used for personal consumption, but individually these farms do not produce the level of output seen from modern industrial farms. The growing numbers of urban farmers and backyard producers have a combined total output, however, that gives buyers a local alternative to what is found in mainstream grocery stores. Those who choose to grow and consume food from local urban farms are doing so for a variety of reasons, including boosting the local economy, decreasing their environmental footprint, and preserving heirloom or less mainstream food varieties. Urban farmers often choose a garden or small-scale production plot as a hobby. However, urban farming does have the potential to turn a profit and create jobs. Neighborhood and community organizations form small groups of urban farms as a way to strengthen social cohesion and make nutritious foods more readily available to area residents.

Convenient access to inexpensive fruits, vegetables, eggs, and other foods in twentieth-century supermarkets made household production and home gardens less of a necessity. However, there typically has been a surge in small household production during times of war and economic downturn, as individuals feel the need to be more self-sustaining. Those who have always carried on the tradition of gardening have typically done so out of the enjoyment of being outdoors, as well as from the satisfaction of eating food they have produced themselves. Urban farming involves more space than a backyard garden, and often entails converting front and back lawns and vacant lots into growing areas. Urban farmers often set out with the intention to grow enough produce to share with or sell to others and earn a profit. The growing popularity of buying local is helping to accomplish this.

Urban farmers use unique intensive methods to maximize the productive potential of plots limited in land area. An intensive method calls for seeds to be planted closer together than standard planting, while keeping the plants staggered to avoid overcrowding. Frequently concerned about sustainability, urban farmers use environmentally friendly farming methods. Rainwater may be captured for irrigation, to avoid using scarce drinking water sources. Pest control is carried out with non-toxic methods, including the use of ladybugs, which can consume 50 to 60 aphids per day Soil quality is maintained with manure or other organic fertilizers. Raised plant beds are often utilized to further maximize resource use, allowing better containment of soil, organic nutrients, water, and mulch to keep weeds to a minimum. Urban farming may also include a small number of chickens, which provide eggs and a natural defense against insects. Many urban areas have adopted ordinances permitting the keeping of a limited number of backyard poultry. Other urban farms raise fast-growing fish varieties such as tilapia or catfish in small ponds.

Heirloom varieties are commonly planted by urban farmers and gardeners in order to maintain a high level of diversity. This is in contrast to industrial farms, which typically plant a narrower selection of food varieties that transport well and have a longer shelf life. Industrial farms also choose crops that are marketable to national shoppers, who expect standardized shapes and appearances of food. Not restricted by such concerns, urban farmers and gardeners typically deliver foods fresh or directly to their customers, who are often drawn to the diverse varieties available. Many gardeners claim that the flavor of heirlooms is superior to that of their supermarket cousins. The growth of rare varieties helps to maintain agricultural diversity. Diversity is important for ensuring food varieties that will survive current and future diseases. Many urban farmers are uninterested in

FOODSHED: Conceptually similar to a watershed, a foodshed is the flow of food feeding a particular community, from the farm to the table, including the transportation and vendor from which it is purchased.

HEIRLOOM PLANTS: Traditional plant varieties often passed down from family to family and not currently used by large agribusiness.

Community urban farms function as a tool to decrease poverty, crime, and other social problems faced by youth and adults in poor or blighted neighborhoods. These farms aim to empower youth and young adults to grow sustainable farms that provide healthy foodoptions to area residents. The experiences of farming impart leadership skills, emphasizing the importance of community cohesion. Neighborhood urban farms may be diverse, bringing together young people, seniors, the working class, immigrants, and professionals with the aim to build a sense of pride for communities while caring for the natural environment. The farms may be developed on a donated parcel of land, or may include a collection of yards in a neighborhood. Volunteers sign up to learn and complete the needed tasks on a farm, such as clearing land, planting and irrigating crops, administering pest control, harvesting, and marketing the produce. Urban farms may also have an educational component that visits local urban schools to expose children to agriculture science and nutrition. In some areas, families or individuals are able to rent small plots or rows in an urban community farm to grow their own food. This is of particular benefit individuals who live in apartments, or other dense urban housing, which does not have outdoor space available for gardening. Community gardens are showing up in many places, including high school and college 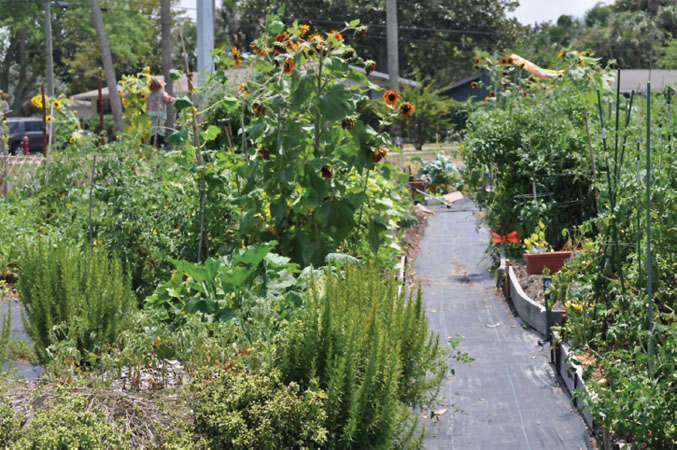 A young person works on an urban farm in Flint, Michigan, as part of the Urban Community Youth Outreach farm.AP Images.

The success of urban farms and gardens depends upon the ability to find markets for locally grown food. There is a growing movement among individuals who recognize the environmental impact of producing food in unsustainable ways. These consumers are concerned with minimizing the use of pesticides and fertilizers on food, as well as maintaining agriculture diversity. Transporting goods grown at locations that are long distances away, often in other countries, to the final market, increases the release of greenhouse gases and other pollution. Bringing in low-cost produce from out of the area makes it difficult for local farmers to compete in the mainstream market. To address this issue, some consumers advocate buying food in local markets, often referred to as a local foodshed. This surge in the demand for local, sustainably-grown food works to the advantage of gardeners and urban farmers. Local farmers’ markets are a popular venue for urban farmers and gardeners to sell food. They may be open once per Page 788  |  Top of Articleweek or more and provide entertainment and educational booths in addition to buying local produce. In some cases, small local grocery stores also stock locally grown food.

Ecologists define an urban ecosystem as a dependent ecosystem, meaning that it depends on other ecosystems, outside energy, and resources to function. In contrast, a natural ecosystem generally has an even balance between its energetic inputs and outputs. Although there are exceptions, urban food systems usually must be artificially maintained, reflecting the state of urban ecosystems in general. Canadian population ecologist William Rees (1943–), a researcher at the University of British Columbia, created an analytical tool to measure the dependency of an urban ecosystem. Termed the ecological footprint, it roughly measures how much land is required to maintain a city's activities. Rees found that Vancouver, British Columbia, for instance, had a footprint 180 times its own size in 1996, meaning that much more land, in terms of extractable resources, is required to support its inhabitants. 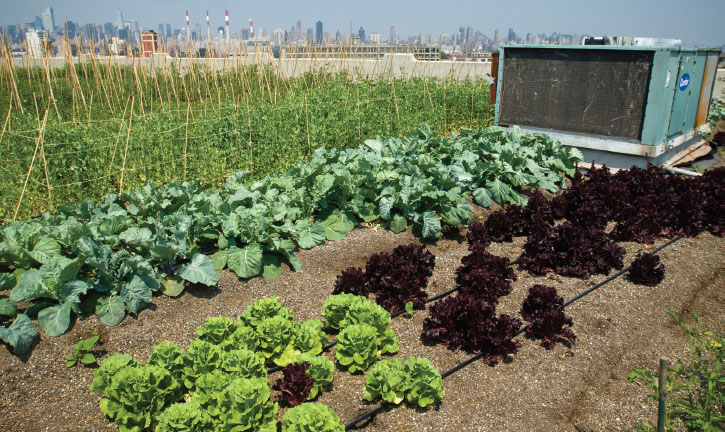 The Brooklyn Grange commercial farm is planted on the roof of a building in the Long Island City neighborhood in the borough of Queens, New York. The rooftop farm, which occupies one acre, is constructed with 1.2 million pounds of soil and produces 15 different including bok choy, kale, lettuce, and Swiss chard. The urban farm is the largest commercial farming initiative in New York. Their produce is sold at their “farm stand” in LIC and to restaurants around the city. Richard Levine / Alamy.

Urban gardens have been planted in a diverse range of urban spaces: patios and balconies, abandoned plots of land, rooftops, schoolyards, and more. Urban gardening initiatives have occasionally been fraught with land-use planning or zoning issues but in some places urban gardening has a mandate backed by law and policy and provides valuable resources.

The city of Esslingen, Germany, adopted a bylaw requiring flat and sloping roofs—up to 15 degrees—to be vegetated. In Switzerland, a law stipulates that all new buildings must relocate the green space taken up by the building's footprint to their rooftops. Even existing buildings—some centuries old—are required to vegetate 20 percent of their roof surfaces.

In addition, urban gardening and agriculture can be harnessed to provide food for urban and suburban populations. Cuba is frequently cited as an excellent example of utilizing city space for vital food supplies. The collapse of the Soviet Union in 1991 drastically reduced agricultural inputs sent to Cuba. In the years immediately following, the national caloric intake of Cubans declined by one-third. In response, during the decade following the withdrawal of Soviet support, the number of urban gardens in Cuba surged, and statistics indicated that by the year 2000 urban agriculture produced more than half of the country's vegetables.