A cholecystectomy is performed to treat cholelithiasis and cholecystitis. In cholelithiasis, gallstones of varying shapes and sizes form from the solid components of bile. The presence of stones, often referred to as gallbladder disease, may produce symptoms of excruciating right upper abdominal pain radiating to the right shoulder. The gallbladder may become the site of acute infection and inflammation, resulting in symptoms of upper right abdominal pain, nausea and vomiting. This condition is referred to as cholecystitis. The surgical removal of the gallbladder can provide relief of these symptoms. 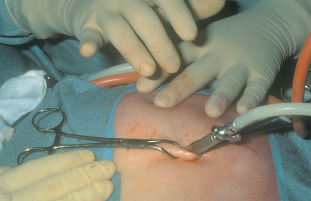 Although the laparoscopic procedure requires general anesthesia for about the same length of time as the open procedure, laparoscopy generally produces less postoperative pain, and a shorter recovery period. The laparoscopic procedure would not be preferred in cases where the gallbladder is so inflamed that it could rupture, or when adhesions (additional fibrous bands of tissue) are present.

The laparoscopic cholecystectomy involves the insertion of a long narrow cylindrical tube with a camera on the end, through an approximately 1 cm incision in the abdomen, which allows visualization of the internal organs and projection of this image onto a video monitor. Three smaller incisions allow for insertion of other instruments to perform the surgical procedure. A laser may be used for the incision and cautery (burning unwanted tissue to stop bleeding), in which case the procedure may be called laser laparoscopic cholecystectomy.

In a conventional or open cholecystectomy, the gallbladder is removed through a surgical incision high in the right abdomen, just beneath the ribs. A drain may be inserted to prevent accumulation of fluid at the surgical site.

As with any surgical procedure, the patient will be required to sign a consent form after the procedure is explained thoroughly. Food and fluids will be prohibited after midnight before the procedure. Enemas may be ordered to clean out the bowel. If nausea or Page 992  |  Top of Articlevomiting are present, a suction tube to empty the stomach may be used, and for laparoscopic procedures, a urinary drainage catheter will also be used to decrease the risk of accidental puncture of the stomach or bladder with insertion of the trocar (a sharppointed instrument).

Cholecystitis—Infection and inflammation of the gallbladder, causing severe pain and rigidity in the upper right abdomen.

Cholelithiasis—Also known as gallstones, these hard masses are formed in the gallbladder or passages, and can cause severe upper right abdominal pain radiating to the right shoulder, as a result of blocked bile flow.

Gallbladder—A hollow pear-shaped sac on the under surface of the right lobe of the liver. Bile comes to it from the liver, and passes from it to the intestine to aid in digestion.

Post-operative care for the patient who has had an open cholecystectomy, as with those who have had any major surgery, involves monitoring of blood pressure, pulse, respiration and temperature. Breathing tends to be shallow because of the effect of anesthesia, and the patient's reluctance to breathe deeply due to the pain caused by the proximity of the incision to the muscles used for respiration. The patient is shown how to support the operative site when breathing deeply and coughing, and given pain medication as necessary. Fluid intake and output is measured, and the operative site is observed for color and amount of wound drainage. Fluids are given intravenously for 24–48 hours, until the patient's diet is gradually advanced as bowel activity resumes. The patient is generally encouraged to walk 8 hours after surgery and discharged from the hospital within three to five days, with return to work approximately four to six weeks after the procedure.

Care received immediately after laparoscopic cholecystectomy is similar to that of any patient undergoing surgery with general anesthesia. A unique post-operative pain may be experienced in the right shoulder related to pressure from carbon dioxide used through the laparoscopic tubes. This pain may be relieved by laying on the left side with right knee and thigh drawn up to the chest. Walking will also help increase the body's reabsorption of the gas. The patient is usually discharged the day after surgery, and allowed to shower on the second postoperative day. The patient is advised to gradually resume normal activities over a three day period, while avoiding heavy lifting for about 10 days.

Potential problems associated with open cholecystectomy include respiratory problems related to location of the incision, wound infection, or abscess formation. Possible complications of laparoscopic cholecystectomy include accidental puncture of the bowel or bladder and uncontrolled bleeding. Incomplete reabsorption of the carbon dioxide gas could irritate the muscles used in respiration and cause respiratory distress.