In December 1960, the United States Supreme Court confirmed a ruling that passengers traveling from one state to another cannot be segregated, regardless of the laws in individual states. A group of thirteen civil rights activists from the Congress of Racial Equality (CORE) decided Page 58  |  Top of Articleto test this ruling by organizing a “Freedom Ride” aboard buses traveling from Washington, D.C., to New Orleans, Louisiana. The journey required them to pass through several Southern states, including South Carolina, Georgia, Alabama, and Mississippi. They began on May 4, 1961. Three Freedom Riders were attacked in South Carolina, and some local police made efforts to disrupt their journey. Still, the Freedom Riders continued onward to Alabama.

In Anniston, Alabama, mobs led by members of the Ku Klux Klan attacked one bus and its riders, setting the bus on fire and attempting to trap the passengers on board. The other bus continued to Birmingham, but there the riders were viciously attacked by another mob. It was later revealed that Birmingham’s sheriff Bull Connor (1897–1973) knew in advance of the planned attack and decided not to send police to protect the riders. Fearful bus drivers for Trailways and Greyhound refused to carry the Freedom Riders any farther, and they were forced to take an airplane for the final leg of their journey.

A group of students from Nashville decided to continue the journey in their place. The students were arrested in Birmingham and returned by police to Tennessee. The students refused to allow themselves to be intimidated and returned to Birmingham to try again. The Greyhound Bus Company, under pressure from U.S. Attorney General Robert Kennedy (1925–68), agreed to carry the new Freedom Riders. They left Birmingham on May 20 and had police protection along the way to Montgomery. In 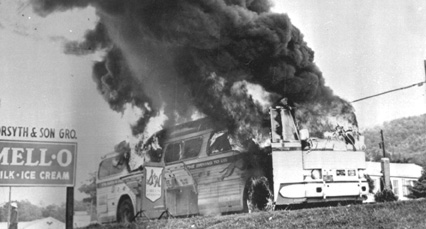 Freedom Riders faced violence from angry white mobs as they travelled through the South, including the firebombing of their buses. AP Images

Famous Freedom Riders include Stokely Carmichael (1941–98), John Lewis (1940–), and Bob Filner (1942–). Stokely Carmichael was a leader of the Student Nonviolent Coordinating Committee (SNCC), and later a leader of the Black Panther Party, a radical black power group that achieved prominence in the late 1960s and early 1970s. John Lewis was chairman of the SNCC and went on to become a United States congressman for the state of Georgia in 1987, an office he continued to hold as of 2010. Bob Filner was a student at Cornell University when he decided to participate in the Freedom Rides. He spent two months in jail after being arrested in Mississippi. Filner, a white participant in the Freedom Rides, represented California’s fifty-first district in the United States House of Representatives starting in 1992.

Montgomery, the group’s promised police protection disappeared, and they were attacked. The mob of angry whites viciously beat the Freedom Riders, both white and black, along with anyone who came to their aid. Among those trying to stop the violence were Floyd Mann, head of Alabama’s state highway patrol, and John Seigenthaler, a U.S. Justice Department aide sent by Robert Kennedy. Seigenthaler was beaten unconscious. Mann ordered in state troopers to stop the violence. After hearing of the attack, Kennedy sent federal marshals to Montgomery.

Martin Luther King Jr. flew to Montgomery and held a meeting at a local Baptist church, surrounded by federal marshals. The presence of the marshals did not stop a crowd of whites from hurling stones through the windows. The marshals, backed up by local police, dispersed the crowd. Kennedy called for a “cooling off” period in the hopes of calming the situation, but the Freedom Riders rejected the plan. They boarded a bus to Jackson, Mississippi, and traveled to Mississippi without incident. They were arrested in Jackson for defying segregation laws. This outrage inspired other Freedom Riders across the South to join the cause. Wave after wave of Freedom Riders converged on Jackson, Mississippi, intent on continuing the original journey. Over three hundred Freedom Riders were ultimately arrested in Jackson and sent to Parchman Penitentiary, where they were forced to endure whips and cattle prods, and sleep without mattresses. 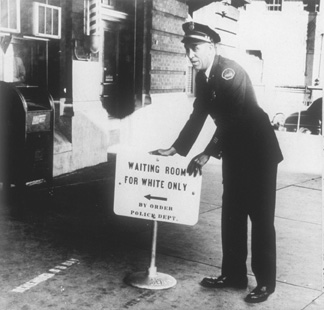 A police officer places a segregation sign in front of a railroad station on January 9, 1956, in Jackson, Mississippi. The railroad company had removed segregation signs from waiting rooms in compliance with an Interstate Commerce Commission order, but Mississippi state law required segregated facilities at rail depots. AP Images

Most of these Freedom Riders spend the summer of 1961 in appalling conditions at Parchman. Many were scarred for life by the beatings and mistreatment they endured. Though they never reached New Orleans, they did succeed in forcing the federal government to take a clear stand on desegregation. Citing the experiences of the Freedom Riders, Robert Kennedy forced the Interstate Commerce Commission (ICC) to enforce its own existing rules outlawing segregation on interstate buses. In 1955, the ICC had ordered the desegregation of interstate bus travel, but it neglected to enforce the rule. Kennedy petitioned the ICC to adopt and enforce strict, clear regulations regarding bus desegregation. Beginning on November 1, 1961, bus stations across the South finally complied.