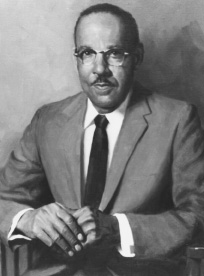 Vivien Thomas’s story is one of the most remarkable in twentieth-century medicine. He grew up in poverty in the South and was unable to afford a college education. He had no formal medical training. Yet, his work in animal laboratories at Vanderbilt University and later at Johns Hopkins University led him to form a long-lasting partnership with renowned heart surgeon Alfred Blalock (1899–1964). Thomas worked with Blalock to develop surgical techniques that were used in the 1940s in the treatment of shock. He was also instrumental in developing the operation that would cure the heart disease known as “blue baby” syndrome. For decades, Thomas supervised research laboratories and trained many surgeons. He was widely known and admired within the medical community, but received little formal recognition until late in his career.

Thomas was born in Nashville, Tennessee, in 1910. His father was a building contractor. Thomas wanted to be a doctor from a young age. He worked after school, on weekends, and during vacations as an apprentice carpenter to save enough money to be able to attend college. He also worked as an orderly in an infirmary. When he graduated from high school in 1929, his prospects of achieving his goal looked good. He enrolled in a premedical program at Tennessee Agricultural and Industrial State College that fall. Disaster struck Thomas and the rest of the nation in October 1929 when the stock market crashed. The crash started a chain of events that led to the Great Depression of the 1930s. The banks failed, and Thomas lost most of his savings. Thomas had to drop out of college almost as soon as he had started. He took on odd jobs to earn money, including roofing and plumbing jobs.

Thomas learned of a job opportunity in 1930 that changed his life forever. The opening was for a laboratory assistant at Vanderbilt University Medical School in Nashville, Tennessee, to work with a surgeon named Alfred Blalock. Blalock was conducting research into shock, or how the human body reacts to trauma. Blalock was impressed by Thomas’s confident manner, and hired him. Thomas devoted himself to his new job, often working sixteen hours a day. He showed a remarkable aptitude, soon learning how to supervise experiments and also studying chemistry and physiology. He worked directly with Blalock to conduct experiments on laboratory animals. The animals were subjected to various kinds of stress and trauma, and these experiments yielded information about the effects of shock that could be of use in the treatment of humans. Blalock’s work led directly to the use of blood transfusions to treat wounded soldiers in World War II, saving many lives.

Blalock entrusted Thomas with more and more responsibilities for the surgical procedures they developed together. They worked as a two-man team, and despite Thomas’s lack of formal qualifications, the renowned surgeon treated him as an equal partner in their work. When Blalock accepted a position at Johns Hopkins Hospital in 1940, he insisted that Thomas be hired also as director of research. At the time, Johns Hopkins was a segregated institution and did not hire African Americans in such positions. The university agreed to hire Thomas, however, and he became a research associate and director of the Hunterian Surgical Research Laboratory in June 1941. This was a position he was to hold for almost forty years.

Blalock and Thomas continued to work together at Johns Hopkins. Thomas used his flair for invention in the laboratory to create devices that Page 503  |  Top of Articlemight be useful in the treatment of medical conditions such as cardiovascular (heart and blood vessels) defects. Thomas and Blalock conducted hundreds of experiments designed to create surgical procedures that could be successfully used on humans.

Blalock and Thomas developed their most famous contribution to surgical techniques in 1943. They were asked to assist in the treatment of an infant named Eileen Saxon. Eileen had been born with a malformed heart. Because of her heart defect, she did not have enough oxygen in her blood. The condition gave her skin a bluish hue. She and others who suffered from this condition were known as “blue babies.” At the time, there was no effective treatment for them.

Blalock and Thomas had already developed surgical procedures in the laboratory that had been successful in increasing blood flow to the lungs of dogs. They performed more experiments over the next year and believed that the techniques they were perfecting in the laboratory could be used to cure Eileen Saxon’s condition. Thomas is credited with finalizing the procedure that they would use. This procedure joined an artery leaving the heart to an artery leading to the lungs.

The three-hour operation on little Eileen was a success. As many famous physicians and researchers observed the procedure, Thomas stood at Blalock’s right shoulder, offering his suggestions. Blalock had refused to perform the operation without Thomas being present. Indeed, such was the esteem in which Blalock held his assistant, he insisted that Thomas be present at the first one hundred such operations. He would not let anyone else stand behind his right shoulder while he worked.

Thomas trained hundreds of surgeons and lab technicians in the techniques of vascular (vein) and cardiac (heart) surgery that he and Blalock had jointly pioneered. He was also known for his expertise in treating animals. Local veterinarians in the area would sometimes call him for advice. But his reputation did not translate into higher paychecks. Thomas’s position as a medical researcher without formal qualifications meant that he did not receive the financial reward that his expertise deserved. His income was small, and it was only when he said he was going to leave and earn more money by working as a carpenter that the university offered to double his salary.

Blalock died in 1964, bringing to an end a remarkable association with Thomas that had endured for thirty-four years. Their partnership was all the more unusual because both men were from the South, where, in Page 504  |  Top of Articlethe 1930s, African Americans and white people did not commonly mix socially. The working relationship between Thomas and Blalock was close, but both were aware that their association could not extend outside of the laboratory.

Thomas finally received some of the official recognition that he deserved in 1971. Many of the surgeons who had been trained by Thomas paid tribute to his life and work in a ceremony at Johns Hopkins. A portrait of Thomas was unveiled in the foyer of the Blalock Building. A modest man, Thomas was deeply moved by this unexpected tribute. Five years later, the man who had never been able to have a college education was awarded an honorary doctorate from Johns Hopkins. It was one of the proudest moments of Thomas’s life. He said he had never expected that such a thing could happen. He became an official member of the medical school faculty in 1977. Thomas continued to supervise the surgical research laboratories at Johns Hopkins until his retirement in 1979. His increased teaching and administrative responsibilities, however, left him with less time to do surgical research.

Thomas died of pancreatic cancer on November 26, 1985. He was seventy-five years old. His autobiography, Pioneering Research in Surgical Shock and Cardiovascular Surgery: Vivien Thomas and His Work with Alfred Blalock (1985), which he had been working on since his retirement, was published shortly after his death.