George Washington Carver is one of the best-known African American scientists in American history. He is famous for coming up with hundreds of different uses for Southern crops like the peanut and the sweet potato. His accomplishments are not as easy to pinpoint as with other scientists, however. He did not write scientific papers, nor did he open his labs for others to observe his methods and findings. Still, his modest charm and obvious intelligence captured the imagination of Americans of all colors during the first half of the twentieth century, and no doubt inspired many young African Americans to pursue their own scientific interests.

An Integrated Childhood in a Segregated World

Carver was born in Diamond, Missouri, to slave parents Giles and Mary. His actual birthday is unknown. He often claimed later in life that he was born in 1864, but could have been born as late as 1865. His father was killed in an accident either before George was born or soon after. His Page 828  |  Top of Articlemother Mary was the slave of Moses and Susan Carver, white farmers who opposed the idea of slavery but needed help taking care of the farm and household. The Carvers, like a majority of Missourians at the time, supported the Union during the Civil War. 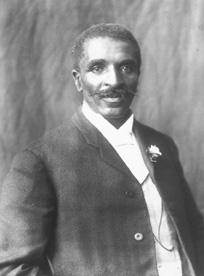 When George was just an infant, he and his mother Mary were kidnapped by Confederate marauders and taken away to Arkansas. A local Union scout searched for them and was able to return with George. Mary was never seen again. The Carvers then raised George, as well as his older brother Jim, as their adopted children. George never knew his biological mother or father, though as an adult he kept the original bill of sale from the Carvers’ purchase of his mother as a treasured memento.

George was frail and in poor health throughout much of his childhood, the result of a chronic respiratory illness. The physical labor involved in farm work was too much for him to handle, so Moses and Jim took care of that while George was allowed to pursue his own interests. He became curious about the plants, animals, and minerals he found around the farm, and eventually showed a special skill for caring for plants. George and Jim were schooled at home by the Carvers, since some whites in the town objected to allowing the children to attend the local school. It did not take long before George’s desire for education surpassed his parents’ abilities to teach him. At around the age of twelve, George was given permission to move to Neosho, the nearest town with a school for African American students.

He quickly grew disappointed by the level of education available in Neosho, and decided to accompany another family who was moving to Fort Scott, Kansas. Kansas was known at the time for its generally accepting attitude toward African Americans. Carver was again disappointed; he witnessed the vicious lynching of a young black man accused of raping a white girl in 1879. He moved to Olathe, Kansas, and later to Minneapolis, Kansas, attending school and performing odd jobs for money and a place to live. He sent an application to a college in Highland, Kansas, and was accepted. The school denied him admission, however, when school officials realized that he was black.

A Farmer, a Teacher, and an Inventor

Unable to continue his education, Carver moved west, purchased a plot of land, and became a farmer. He was remarkably successful in growing a number of different crops and plants, and his knowledge of soil and agriculture continued to grow. His desire to further his education never left him, however. He left Kansas and ended up at Simpson College in Indianola, Iowa, in 1890. While there, he excelled in nearly every subject, and even became a successful painter. He also earned the friendship and respect of his fellow students, who were mostly white. Many provided anonymous donations to help him pay for his schooling.

After just a year, Carver was encouraged to enroll at Iowa State College to study horticulture, the science of cultivating plants. He was the only African American on campus, and his reception was at first chilly. He ultimately won over both students and staff, and earned both his bachelor’s and master’s degrees at the school by 1896. His success did not go unnoticed. Booker T. Washington (1856–1915), founder of the Tuskegee Institute in Alabama, invited Carver to work at the school as the head of the department of agricultural research.

Carver kept a busy schedule at Tuskegee, but was free to perform any research he wished. One of the problems that interested him most was the depleted soil found throughout the South. Where gigantic cotton fields 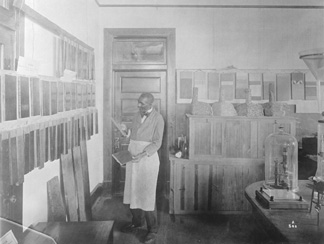 had once grown abundantly, many farmers were having difficulty getting any crops to grow. Carver’s own experience as a farmer taught him that planting the same crop year after year in the same soil—a type of farming known as monoculture—tended to rob the soil of its nutrients. This is exactly what had happened throughout the South, since cotton was the most profitable crop to grow.

Carver discovered that this sort of farming depleted the nitrogen from the soil. This problem could be reversed by switching between various kinds of crops. Carver recommended growing legumes such as peanuts, which were excellent at replenishing nitrogen in the soil. He released this information in a bulletin put out by the Tuskegee Experiment Station, How to Build Up Worn Out Soils, in 1905. He hoped that poor farmers in the region, especially African American farmers, could use the information to improve crop yields. Carver also recommended growing sweet potatoes, which performed well even in poor soil. He created a traveling wagon in 1906 that visited farms and spread word of his discoveries to help educate local farmers.

Carver dedicated himself to finding many different uses for peanuts as a way to encourage farmers to plant the crop. It was already clear that peanuts were useful as food; they contain a great deal of protein, and growing them was much cheaper than buying or raising animals for meat. Carver used his labs at Tuskegee Institute to invent other uses for the peanut, as well as for sweet potatoes and other nitrogen-fixing crops like soybeans. He published his most famous bulletin, How to Grow the Peanut and 105 Ways of Preparing it for Human Consumption, in 1916. Despite the title, Carver did not limit his imagination to nutritional uses for peanuts. He also came up with ways to use them in face cream, glue, ink, insecticide, and dozens of other products. He showed the same inventiveness with the sweet potato, which he used to make dyes, synthetic cotton, and even alcohol.

It was his inventiveness with peanuts that earned Carver an appearance before the United States Congress in 1921. He was called to speak before the Ways and Means Committee regarding the issue of tariffs, or additional taxes, on imported peanuts. His purpose was to illustrate the many uses for peanuts, which he did by providing samples of various creations to the committee members. At least one of the committee members treated Carver with disrespect because of his race, but he won the attention and praise of other members, and was allowed to continue speaking long past his allotted time of ten minutes. The appearance earned him both fame and respect, and he was often called upon to promote the Tuskegee Institute.

Carver received the Spingarn Medal from the National Association for the Advancement of Colored People (NAACP) in recognition of his beneficial research in 1923. He continued publishing bulletins on his agricultural findings until his death in 1943. A museum in his honor was founded on the institute campus in 1941. Carver did little to document his many experiments and creations over the years. This frustrated many scientists of his day; it also kept others from making or using many of the useful products he had created from peanuts, sweet potatoes, and other crops.

Carver’s health began to fail in the 1930s. He died on January 5, 1943, as a result of complications from anemia. A national monument in his honor was created and opened to the public in 1953. He was the first African American to be honored with a national monument by the United States government.