American Indian Art in the Northeast and Plains

American Indian Art in the Northeast and Plains

Woodlands Culture. From 1492 to 1600 the Woodlands region of North America, a vast area ranging from the St. Lawrence River and the Great Lakes in the North to the Gulf of Mexico in the South, and from the Atlantic Ocean in the East to the Mississippi River in the West, was home to hundreds of different Native American groups, most of whom lived by hunting and agriculture. The Woodlands populations produced a range of functional artworks, most significantly birch-bark canoes, birch-bark architecture, pottery, quillwork, beadwork, animal-skin clothing, woodcarving, stone sculpture, and basketry.

Basketry. Although native basketry has prehistoric roots, the oldest surviving Woodlands baskets only date from the seventeenth and eighteenth centuries. Geometric designs and “false embroidery” were common. To create false embroidery, native women dyed moose hair or porcupine quills and applied them to the baskets, twisting them around the twined hemp.

Quillwork. The most unique native North American art form was decorative quillwork. Woven quillwork was commonly applied to leather objects such as shirts, bags, or moccasins. This technique utilized plucked quills from porcupines or birds which native women dyed and used to create dense mosaic-like patterns. The designs, 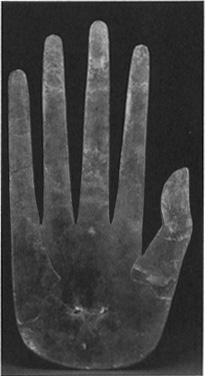 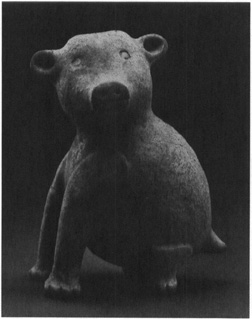 usually abstract as opposed to figural, often took the form of geometric or curvilinear patterns in a variety of colors, including black, red, yellow, and occasionally blue. The earliest examples of quillwork came from the Micmac area north of Lake Huron. In the late sixteenth century Micmac women began to apply quillwork to bark, creating the first tourist art for European traders. The Hudson Bay Cree also produced notable examples.

Wampum Belts. The Eastern Woodlands Indians produced a type of beadwork referred to as wampum belts which consisted of bands woven from purple and white beads made of clam or conch shells from the northeast Atlantic coast. They displayed a variety of abstract and representational designs and had a variety of uses. The Iroquois and Delaware used wampum to keep records. Wampum was also exchanged in treaties or other political or ceremonial transactions. After colonial contact and the introduction of European iron tools, production of wampum increased, and it came to constitute an important form of exchange.

Clothing and Adornments. Clothing and personal adornment attained the status of art among many of the native North Americans. Woodlands Indians in particular created elaborate animal-skin clothing. Women sewed deerskin garments such as breechcloths and coats for men and kiltlike skirts or strap dresses for themselves. Native women ornamented the leather clothing with quill embroidery or pigments. Face or body painting and elaborate hairstyles completed the effect, serving as indicators of the wearer's social status or to commemorate a special event. The paint was temporary in nature and usually employed mineral pigments, charcoal, and pollen mixed with water or grease. Simple linear tattoos provided permanent bodily decorations. They were created by tattoo specialists who pricked the skin and then rubbed black charcoal paste into the wounds to create a design. Indigenous Woodlands clothing and personal adornments are seen in the sixteenth-century prints by the Flemish engraver Theodor de Bry. Woodlands Indians preserved traditional forms of dress well into the late eighteenth century, when wool began to replace animal-hide garments.

Plains Hide Art. The Plains Indians, nomadic tribes who followed the buffalo herds in the central United States, are known for their buffalo-hide art. The Plains tribes lived in portable epees, conical structures of poles covered with decorated buffalo pelts. Plains men executed paintings on epee linings and robes that recorded their war exploits. Although the Spanish documented the existence of these hides in the sixteenth century, the earliest extant buffalo-hide painting, the Mandan Robe, dates from 1797 to 1805. Despite its late date it is thought to reflect accurately the earlier Plains hide-painting style. The robe depicts a battle scene between Page 61  |  Top of Articlethe Mandan of North Dakota and the Lakota. Warrior figures, drawn in outline, are depicted in twenty-two separate battle episodes. Significant attention has been paid to the warriors’ costumes and weapons. In addition, the artist elaborated the hide with natural pigments and quillwork embroidery. The pictographic style, while clearly recording the important battle, is rather abstract. In other words, the artist did not wish to re-create accurately the appearance of the visible world. As a result many warrior figures combine multiple views. For example, a figure's head may be presented frontally while his body appears in profile. These pictorial strategies, which are common to many indigenous traditions throughout the Americas, increase visibility for the viewer. The painted and embroidered robe was worn by the warrior-artist on his shoulders as a proclamation of his valor. Plains hide painting had a strong influence on certain forms of Spanish colonial painting in the Southwest.