American Indian Art of the Southwest

American Indian Art of the Southwest

Pueblo Culture. Key among Southwestern Native American cultures are the Pueblo Indians, prolific Desert culture artists and architects. The Pueblo people are famous for their multistoried dwellings, the only permanent indigenous architecture of the precontact period. In addition, Pueblo artists produced the only known fresco paintings and weavings in North America as well as notable examples of pottery, basketry, and ritual art and architecture.

During the period of colonization Native Americans produced Christian art and architecture under the direction of European friars which defies standard art historical stylistic categories. Traditionally twentieth-century art historians have described it as mestizo or tequitqui art. Mestizo is a racial term meaning “of mixed European-indigenous descent.” Tequitqui is a Náhuatl, or Aztec, word meaning “one who pays tribute.” Both terms represent attempts to recognize the unique nature of New World cultural production. Recently the more neutral label of “Indo-Christian art” has come to replace these racially loaded terms. The label “Indo-Christian” more accurately reflects the mixed, syncretic heritage of these cultural products.

Sources: George Kubler, “On the Colonial Extinction of the Motifs of Pre-Columbian Art,” in Essays in Pre-Columbian Art and Archaeology, by S. K. Lothrop and others (Cambridge, Mass.: Harvard University Press, 1961), pp. 14–34;

Adobe Architecture. The New Mexican Pueblo people have lived for centuries in permanent adobe dwellings in agricultural communities. Taos Pueblo in northern New Mexico maintains traditional indigenous building techniques in its two-house blocks. Although the current buildings date from around 1700, having been rebuilt after a 1690 fire, they preserve precontact adobe building techniques. To create these structures indigenous builders formed hand-shaped adobe bricks and laid them in horizontal courses to build walls, which were finished with a coating of plaster. They placed vigas, or beams, 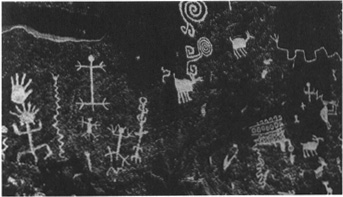 Petroglyphs at the Village of the Great Kivas in New Mexico; Anasazi, circa 1100

A decorated Hohokam pottery bowl (circa 600–900 ) found along the banks of the Santa Cruz River in southern Arizona (Arizona State Museum, University of Arizona, Tucson, Arizona)

across the walls to form the framework for flat roofs. On top of the vigas Pueblo builders layered smaller branches, grasses, and mud to form the roof. Typically, the vigas projected on the exterior beyond the walls, a distinctive hallmark of Pueblo architecture which Spanish colonial builders would appropriate and which can be seen today in many contemporary New Mexican buildings. Using these techniques Pueblo builders erected one- to four-story apartment-like structures. Traditionally the dwellings had no doors and few windows, and entrance was gained via an opening in the roof reached by a ladder. Although adobe structures have to be replastered 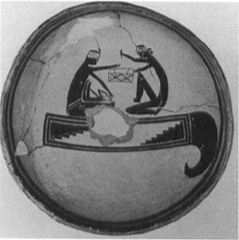 A pottery bowl of the Mogollon culture, circa 900–1100 , deliberately broken in the center (“killed”) before it was placed in the grave of its owner (Arizona State Museum, University of Arizona, Tucson, Arizona)

due to weathering, they are extremely well insulated. Traditionally Pueblo women oversaw the replastering, a custom that Spanish women would imitate in colonial New Mexico.

The Kiva. Pueblo multistoried housing blocks were typically arranged around a main plaza, which included a kiva, or round semisubterranean ceremonial room. The kiva, the interior of which was reached through an opening in the roof accessed by a ladder, was the heart of the community and served both sacred and social functions. Pueblo painters decorated kivas with dry fresco wall paintings of deities and religious symbols executed in a flat style with strong outlines. Famous examples can be found in Awatovi, Arizona, and Kuauá, New Mexico.

Kachinas. Desert culture Indians, including the Pueblos, are known for their kachina dolls. Because of the great religious significance of these wooden sculpted dolls, the Spanish repeatedly tried to suppress their creation during the colonial period. Unfortunately, because kachinas were not collected or studied until the 1850s, no contact era kachinas exist. It has been posited that early kachinas originated in the tenth or eleventh century A.D. and were extremely simple carved cottonwood sticks or boards. The earliest dolls were unclothed and probably hung from the walls of dwellings by strings. Usually carved by men, they represent the spirits of natural elements such as animals, clouds, or mountains and act as intercessors between humans and the gods, bringing rain and curing disease. Carved kachina dolls also replicate the masked dancers who impersonate the invisible spirits represented by the kachinas in religious ceremonies. Clothed kachinas began to appear in the nineteenth century, and today's figures are freestanding sculptures. Elders traditionally gave these small carved figures to children. Young men also presented them as gifts to young women.