Charges. In 1692 some teenage girls in Salem, Massachusetts, accused a West Indian slave named Tituba and two white women of practicing witchcraft. The girls behaved strangely and were subject to bodily fits. Most Puritans believed in witchcraft, and witches had been prosecuted in Massachusetts several times in the preceding decades. By April the girls began to denounce others as witches, including a former minister.

Hysteria. The events that followed are notorious in American history. A special court was convened in which the judges were not trained in the law and in which the accused had no attorneys. The court violated precedent by agreeing to consider “spectral evidence”—testimony by an accuser that claimed that a specter (spirit) resembling the accused person was the source of the accuser's misery. Such a specter could only be seen, it was believed, by the victim, so the evidence could neither be refuted nor corroborated and for that reason had not been admitted in the past. The trials that followed resulted in hundreds of accusations, over one hundred guilty verdicts, and the executions of twenty persons, mostly women. Nineteen who refused to confess were hanged, and one man was pressed to death with stones for refusing to answer the charge, thereby saving his family's fortune. By early 1693 several ministers had expressed grave doubts about spectral evidence, and the governor pardoned those condemned and eventually suspended all the trials.

Causes. Even though the hysteria was not limited to Salem, a close analysis of the community reveals some patterns concerning witchcraft accusations throughout New England. Most of the accusers came from the more rural Salem Village, with a third of the accusations originating with members of the Putnam family. The accused generally were prosperous and from the commercially oriented Salem Town. Most of the young girls who made the accusations had lost a parent in Indian raids and now worked around Salem as servants, while most of the accused were prosperous, older women without husbands or sons.

Puritan Mission. More broadly, the witchcraft hysteria of 1692 reflected deep anxieties among Puritans that the idealized, pious way of life they had created was ending. They had lost their charter in the 1680s, and under the new charter of 1691 the male members of the Puritan (Congregationalist) churches had to share the vote and office-holding with Anglicans. The tight-knit religious communities of their founders 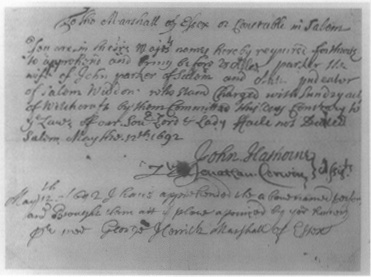 Warrant for the arrest of Ann Pudeator on charges of witchcraft, 1692 (Essex Institute, Salem, Massachusetts)

were giving way to more business-oriented and competitive towns. These changes, coupled with their sincere belief in a spiritual world in which good and evil fought for the souls of humans, made it easy to believe that there were witches among them causing all sorts of problems. Even so, the simple legal error of admitting spectral evidence turned what would have been isolated, ugly episodes into a yearlong horror for Massachusetts.

Carol F. Karlsen, The Devil in the Shape of a Woman: Witchcraft in Colonial New England (New York: Random House, 1987).