Coffee in the Americas

Coffee in the Americas

The coffee plant, native to Ethiopia and adjacent areas or to the Arabian Peninsula, was well known in the Muslim world from ancient times. The coffeehouses that emerged as centers of social and intellectual interaction in the port cities of Europe in the seventeenth century were supplied from Red Sea sources, particularly Yemen. The plant was introduced into the Caribbean islands, the Guianas, and Brazil in the early 1700s, and was produced primarily for local consumption for some time thereafter. Large-scale commercial cultivation of coffee in the tropical regions of the Americas emerged only in the nineteenth century, as demand grew in Europe and North America and transportation technology connected remote producing areas to seaports. Thus coffee as a major international commodity is specific to the era of neocolonialism or economic dependency, notwithstanding the participation of colonial Cuba and Puerto Rico in the coffee trade in the nineteenth century.

Coffee requires a frost-free climate with well-distributed rainfall and rich soils. While cultivation is possible at sea level, the cooler climate of tropical highlands is better suited to large-scale production of a high-quality product. These conditions are met in the interior uplands of southeast Brazil, as well as in the highland areas closer to the equator in Colombia, Central America, southern Mexico, and the larger Caribbean Islands. Cultivation is relatively labor intensive through much of the annual cycle, and the spread of coffee in the Americas has been accompanied by the occupation of frontier zones by either plantations, nearly all in the hands of local landowners, or small-scale peasant holdings. It has historically involved little foreign investment in producing areas except in transportation infrastructure, especially railroads after the mid-nineteenth century. Large firms in the European and North American areas of high consumption, however, have dominated international transportation, processing (roasting), distribution, and marketing. These areas included continental Europe and the United States, where industrialization and the general expansion of wage labor and increases in the purchasing power of Page 243  |  Top of Articleworking people accompanied the growth of commercial coffee production in tropical America.

As an international commodity, coffee first expanded into the Paraíba river valley north and west from the port city of Rio de Janeiro, Brazil, in the first decades of the nineteenth century. By 1830 coffee had supplanted sugar as Brazil's most important export crop, and it held that position until surpassed by soybean exports around 1980. Slavery had been the mainstay of the plantation system introduced into the sugar areas of northeast Brazil in the 1530s, and the spread of coffee three centuries later gave slavery and the African slave trade to Brazil a new lease on life, just at the time when the antislavery movement was gaining force in Europe and some former colonial areas. In 1827, under pressure from the British government, Brazil agreed to halt the importation of slaves from Africa by 1831. Primarily spurred by labor demand in the Paraíba valley coffee sector (sugar was by then in decline), the (illegal) importation of slaves to Brazil actually increased in the two decades after 1831. Before and, increasingly, after the end of the international slave trade to Brazil in 1851, the internal transfer of slaves from elsewhere in the country, particularly the depressed sugar areas of the northeast, fed labor demand in the coffee zone, which by the middle of the century had expanded into the western plateau of the adjacent province of São Paulo.

Coffee production under slavery was as ruthless and regimented as in other slave plantation regimes. Clearing virgin forests was rough and dangerous work, after which seedlings were planted that had to be tended for three to four years before the first harvest. Gangs of workers driven by whip-wielding feitores (slave drivers) weeded the groves several times a year, a routine punctuated by intense labor during the harvest from September to December. The harvested beans were milled to remove the cherry-like hull, dried on brick-paved platforms, and bagged for shipment to the port. Perhaps half of the slaves on the plantation worked in activities other than coffee production, as all manual labor—construction, transportation, tending livestock, household maintenance and service, and food production, processing, and preparation—was done by slaves. Slave diets consisted primarily of locally produced maize mush, rice, beans, and manioc flour, with the occasional addition of pork, and some salted beef imported from the cattle-producing regions of southern Brazil.

Transportation of coffee to ports was by slow and expensive mule train until the railroad was built into the Paraíba valley beginning in 1855, using British and U.S. technology, capital, and rolling stock. In the following decade a railroad was built, by an English firm, over the steep escarpment separating the port of Santos and the interior plateau of São Paulo. This facilitated the spread of coffee into the rolling tablelands to the west, into which several locally financed railroads were built in subsequent decades. Just as the available land in the Paraíba valley was exhausted in the 1880s and slavery entered the decline that culminated in final abolition in 1888, western São Paulo surpassed Rio de Janeiro as the center of the Brazilian coffee industry.

A coffee blight in the colonial Dutch East Indies (Java and Sumatra) in the 1870s eliminated a major alternative source of supply, and from the mid-1880s to the mid-1890s high world prices led to rapid expansion of coffee in Brazil and elsewhere in the Americas. During the first two decades of the twentieth century Brazil supplied some three-fourths of the coffee in the world market, with São Paulo alone accounting for fully half.

From the mid-1880s to the onset of the Great Depression, São Paulo was the destination of some two million European immigrants, primarily from Italy, Spain, and Portugal, who replaced the slaves in the coffee labor force and toiled in the various industries that developed during the subsequent era of expansion. Immigrants worked as colonos under a complex system of compensation known as the colonato. Families contracted their labor as a unit, for the yearly cycle of weeding and pruning the groves, for which they received an annual wage calculated in blocks of 1,000 trees; for the harvest, for which they received a stipulated wage per basket picked; and for occasional daily labor around the fazenda, or plantation. In addition, they were given the use of a modest house in the colonia and access to land on which to plant food crops and pasture livestock, the proceeds of which were for the colono family's consumption or sale in regional markets. By using the extensive frontier lands of the São Paulo plateau in this way, this system solved the perennial problem of provisioning the plantation labor force. It also provided the colono family with a remuneration package that in good times was potentially lucrative, especially in comparison to the situation of workers in many other colonial and neocolonial plantation complexes. A significant number of colono families were able to use their savings from plantation work to acquire land and become coffee farmers themselves, if usually on a modest scale. By the early 1930s more than one-third of the coffee farms in São Paulo, accounting for one quarter of the state's production, were owned by first-generation immigrants.

Colombia first exported small quantities of coffee in 1835, and by the early twentieth century was exporting about half a million 132-kilogram bags per year (at a time when annual Brazilian exports averaged some 12 million bags). While most Colombian production has come from small and medium-sized farms, the formation of the National Federation of Coffee Growers in 1927 institutionalized a system whereby most Colombian coffee was marketed through what became a powerful Page 244  |  Top of Article 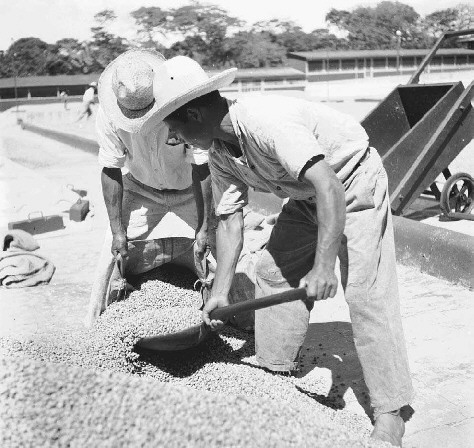 Shoveling Coffee Beans, El Salvador, 1955. Workers on a coffee plantation in El Salvador collect dried and sifted coffee beans from the beneficio, or drying area. Hulton Archive/Getty Images. Reproduced by Permission. organization controlling the country's main export. As a result of astute marketing and specialization in higher-quality arabica varieties (much Brazilian production was of the robusta variety), Colombia's production expanded during the 1920s and especially after World War II. By the 1980s the aggregate value of Colombia's coffee exports rivaled that of Brazil (whose large internal market absorbs about half its total production).

In the nineteenth century cultivation began in the highland areas of Central America, and also in southern Mexico, as consolidating national elites encroached on indigenous lands through laws limiting corporate village ownership, and through usurpation. Many formerly autonomous peasants were coerced or drawn into the labor force of the new export activity. German planters and coffee traders were important in some areas of Guatemala and neighboring Chiapas, Mexico, from the 1870s to World War I. Costa Rica's coffee production, like that of Colombia and adjacent western Venezuela, involved a greater proportion of smaller farms, in contrast to Guatemala and El Salvador, where larger plantations were the norm.

Coffee in tropical America has been produced under a wide variety of ecological conditions, agrarian Page 245  |  Top of Articlestructures, and labor regimes, and it has at times been an important export commodity in most countries from Mexico to Brazil, to the larger Caribbean islands. In the late twentieth and early twenty-first centuries, movements were launched in consuming areas to ensure that peasant growers received fair prices for their product, even as the expansion of coffee cultivation in Vietnam and Africa brought lowered prices due to excess supply. Coffee continues to suffer the boom and bust cycles that have characterized its price on the international market for nearly two centuries.