About the Author: The National Association OPPOSED to Women Suffrage, headquartered in New York City and later in Washington D.C., organized in response to groups such as the National Women's Party and the 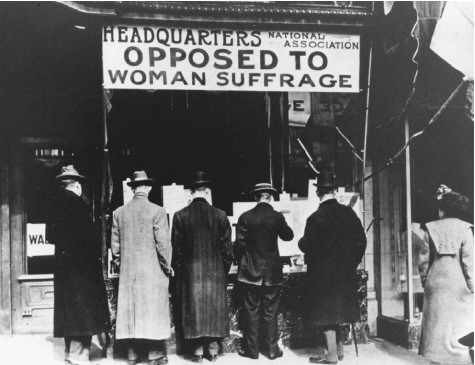 Men read literature posted in the window of the headquarters of the National Association Opposed to Woman Suffrage as a woman stands off to the side, New York, New York, 1910s. The Library of Congress. National American Women's Suffrage Association, which fought for women's right to vote in the United States. The National Association OPPOSED to Women Suffrage (NAOWS) included both men and women. It disbanded shortly after the Nineteenth Amendment to the Constitution, which granted women the right to vote, passed in 1919.

The convention held in Seneca Falls, New York, in July 1848 marked the inception of the organized women's suffrage movement in the United States. More than 240 supporters of the right for women to vote gathered at the convention; forty were men, among them Frederick Douglass (1817?–1895), the former Page 287  |  Top of Articleslave and lecture circuit speaker devoted to the abolition cause. The convention was considered to be scandalous by opponents of female suffrage, who believed that any wife's viewpoint could be represented through her husband's vote. In addition, opponents argued, female nature was delicate, and politics was cruel and worldly. Permitting women the right to vote, they maintained, would place their femininity in jeopardy.

With the passage of the Fifteenth Amendment to the Constitution, which extended the right to vote to all men, including African Americans, suffragettes increased their efforts to attain the vote for women as well. In 1890, two separate women's rights organizations merged to form the National American Women Suffrage Association (NAWSA), a group organized by middle-class women that appealed largely to women of the middle and upper classes.

By the early 1900s, another women's rights organization, the National Women's Party, emerged as a more radical group. Headed by Alice Paul (1885–1977), the NWP appealed to urban workers, women of the lower economic classes, and minority and immigrant women. Using tactics such as silent protests, marches, and hunger strikes when jailed, the NWP's actions angered NAWSA; the older organization believed that the radical tactics of the NWP would harm the suffrage cause.

In fact, NAWSA's concerns were valid. When the National Association OPPOSED to Women Suffrage formed in 1911, it used radical suffrage activities as a springboard for launching a campaign against female suffrage. Led by Josephine Dodge, NAOWS supporters included wealthy women, Catholic clergymen, and brewers and distillers; a motley crew, but one that gained national prominence as the tensions surrounding suffrage grew. The alcohol industry, concerned that women—the organizers behind the temperance movement—would vote in ways that would restrict alcohol access and production, supported NAOWS. As this pamphlet shows, NAOWS appealed to traditional ideas about womanhood and female roles in the household, while denigrating suffragette and activists' actions.

You do not need a ballot to clean out your sink spout. A handful of potash and some boiling water is quicker and cheaper.

If new tinware be rubbed all over with fresh lard, then thoroughly heated before using, it will never rust.

Use oatmeal on a damp cloth to clean white paint.

Control of the temper makes a happier home than control of elections.

When boiling fish or fowls, add juice of half a lemon to the water to prevent discolorations.

Celery can be freshened by being left over night in a solution of salt and water.

Why vote for pure food laws, when your husband does that, while you can purify your Ice-box with saleratus water?

Clean your mirrors with water to which a little glycerine has been added. This prevents steaming and smoking.

To drive out mice, scatter small pieces of camphor in cupboards and drawers. Peddlers and suffs are harder to scare.

To remove shine from serge, sponge with hot water and vinegar and press in usual manner.

Clean houses and good homes, which cannot be provided by legislation, keep children healthier and happier than any number of uplift laws.

Butter on a fresh burn takes out the sting. But what removes the sting of political defeat?

When washing colored hosiery, a little salt in the water will prevent colors from running.

If an Anti swallows bichloride, give her whites of eggs, but if it's a suff, give her a vote.

The following methods for removing spots and stains will be found efficacious.

Grass stains may be removed from linen with alcohol.

Fruit stains may be removed in the same way, but hot alcohol works quicker.

Discolorations and stains on bath enamel may be removed by turpentine.

Leather stains on light colored hosiery may be removed by borax.

There is, however, no method known by which mudstained reputation may be cleaned after bitter political campaigns.

VOTE NO ON WOMAN SUFFRAGE

BECAUSE 90% of the women either do not want it, or do not care.

BECAUSE it means competition of women with men instead of co-operation.

BECAUSE 80% of the women eligible to vote are married and can only double or annul their husband's votes.

BECAUSE it can be of no benefit commensurate with the additional expense involved.

BECAUSE in some States more voting women than voting men will place the Government under petticoat rule.

BECAUSE it is unwise to risk the good we already have for the evil which may occur.

By the time the National Association OPPOSED to Women Suffrage formed in 1911, the women's rights movement had more than seventy years of organizing and lobbying behind it. Critics of NAOWS charged that the brewers and distillers were the primary force behind NAOWS. However, Josephine Dodge's influence was key in the organization's development.

Dodge was instrumental in the day nursery movement in the late 1800s. Her work in creating day nurseries, the precursors to modern day care centers, centered on inner city immigrant families; in 1878 she sponsored the Virginia Day Nursery in New York City's East Side tenements. While the mothers worked in the factories, nursery workers not only cared for the children but were part of a plan to "Americanize" the immigrants' children.

By 1899 Dodge viewed the growing suffrage movement as a threat to women who worked on Progressive Era humanitarian issues. By 1911 she organized NAOWS, making use of the experience in organizing and public relations she had gained through her work in the nursery movement. She was president of NAOWS until 1917, when the organization shifted its headquarters to Washington D.C.

NAOWS's primary message was acceptance of women's role in the domestic sphere and insistence on maintaining that tradition. As this pamphlet illustrates, NAOWS blended political messages with practical advice. In simple language interspersed with jokes and light sarcasm, the theme is clear—women don't need the vote. NAOWS organizers distributed pamphlets such as this one, as well as a newsletter, Women Protest, to convince women that having the vote was not only superfluous (given the wife's representation through her husband's vote) but could be damaging to their children and the maintenance of their households.

Phrases such as "There is, however, no method known by which mud-stained reputation may be cleaned after bitter political campaigns" and concern for "petticoat rule" zeroed in on the decade's concept of femininity and delicacy. In black and white terms, those opposed to suffrage painted voting rights supporters as unfeminine, poor mothers, derelict wives, and as women of "loose" morals.

NAOWS, like NAWSA, organized supporters on a state-by-state basis and used counter protest, as well as pamphlet distribution, to sway public opinion. When the Nineteenth Amendment passed both houses of Congress and then was ratified by thirty-six states, women received the vote in 1920. NAOWS continued to publish messages through the mid-1920s, focusing on anti-Equal Rights Amendment articles and pamphlets that criticized feminist activities.