SASSOON, family of Jewish merchants, philanthropists, and men of letters, originally from *Baghdad ; its members rose to great influence and affluence first in India and then in England and China. The founder of the family was SHEIKH SASSOON B. SĀLAḤ (1750–1830), who was the president (nasi) of the Jewish community in Baghdad for almost 40 years and chief treasurer of the Ottoman pashas of Baghdad. Through the building of textile mills and factories in Bombay on a large scale, the Sassoons exerted tremendous power in the commercial arena, and the wide ramifications of their activities earned them the reputation of the merchant-princes of the Orient, "the Rothschilds of the East." His son DAVID S. SASSOON (1792–1864), who had taken on the commercial activities of the family, escaped from the oppression and tyranny of Pasha Daud and fled in 1828 to *Bushire on the Persian Gulf, where he was joined by his father, who died there. David S. Sassoon moved with his large family in 1832 to *Bombay , where he established a business which assumed international scope. The philanthropic activities of David Sassoon and his eight sons greatly benefited Bombay as a whole, and the Jewish community in particular. In 1861 he built in Byculla, Bombay, the synagogue Magen David, and some of the most important cultural and civic institutions, including hospitals, orphanages, libraries, museums, schools, and charitable communal organizations owe their existence to Sassoon's munificence and generosity. David Sassoon was instrumental in publishing the Judeo-Arabic newspaper Doresh Tov le-Ammo (1855–66) and supported scholars and scholarly publications. In Poona, where he had his summer residence, he built the David S. Sassoon Hospital, noteworthy for its nonsectarian character, an infirmary and leper asylum, and in 1863 the synagogue Ohel David, whose 90-foot spire is a Poona landmark. His mausoleum, on which there is a long Hebrew inscription in both prose and poetry, is situated in the courtyard of the synagogue. His eldest son, 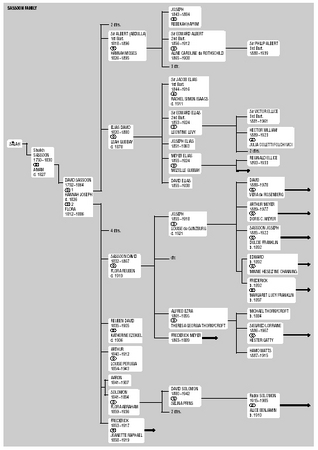 SIR ABDULLA (later Albert) SASSOON (1818–1896), was similarly prominent in commerce and philanthropy in Bombay. He established one of the first large-scale textile mills in Bombay, thus extending his father's business to include industry as well as trade. In 1872–75 he constructed the first wharf on the west coast of India, the Sassoon Docks in Kolaba, which employed thousands of local workers and stimulated the Bombay government to build the larger Prince's Dock. In addition to providing the initiative for establishing Bombay as a modern port city, he contributed a new building to the Elphinstone High School, maintained a Jewish school, the David Sassoon Benevolent Institution, and supplied university scholarships. In the mid-1870s Albert settled in London, where the family's business interests were increasingly centered. In recognition of his role in the industrialization of India, he was made a baronet in 1890 and was on terms of personal friendship with the Prince of Wales, later Edward VII. But it was Albert's brothers (by David's second wife), REUBEN D. SASSOON (1835–1905) and ARTHUR SASSOON (1840–1912), who became particularly prominent in the court circle of Edward VII. Reuben, little concerned with the family's business, was a favorite traveling companion of the Prince of Wales. Arthur, a man of learning who spoke Hebrew and knew the Bible well, was a highly praised host during the late Victorian and Edwardian age. His home in Brighton was the scene of lavish entertainments, at which Edward VII was a frequent guest. Participating neither in the firm nor in society was AARON SASSOON (1841–1907), whose life remains obscure. He left most of his fortune to be distributed to the poor, wherever David Sassoon and Company did business. Aaron's twin brother, SOLOMON SASSOON (1841–1894), who remained in the Orient, was at an early age put in charge of the business interests in Shanghai and Hong Kong. The most capable businessman, after Albert, of all the brothers in the family enterprise, he controlled the company from 1877 to 1894. Solomon was a Hebraist and student of the Talmud, but his wife FLORA SASSOON (1859–1936), a great-granddaughter of the original David Sassoon, actually achieved renown as a Hebrew scholar and was often consulted on questions of Jewish law. After her husband's death, Flora managed the firm in Bombay for some years and in 1901 settled in England, where she entertained scholars and public men in a grand style. Strictly Orthodox in her observance of Judaism, she included a shoḥet and a minyan in her entourage when traveling. In 1924, at Jews' College, London, she delivered a learned discourse on the Talmud, and in 1930 she published an essay on Rashi in the Jewish Forum. Solomon and Flora's son DAVID SOLOMON SASSOON (1880–1942), who continued their interest in things Jewish, became an outstanding Hebraist and bibliophile. His important collection of over 1,000 Hebrew and Samaritan manuscripts, including the Farḥi Bible, written in 14th-century Provence, was cataloged in Ohel Dawid (2 vols., 1932). His independent publications included his pioneer edition of *Samuel ha-Nagid 's diwan from a manuscript in his own collection (1934) and his History of the Jews of Baghdad (1949).

SOLOMON DAVID SASSOON (1915–1985), son of David Solomon and Selina Sassoon, was ordained as a rabbi in 1936. He lived in Letchworth outside London until 1970, when he settled in Jerusalem. He inherited his father's valuable collection of Hebrew manuscripts and increased the total collection to 1,350 items. He retained his father's scholarly tastes and published Moshav Zekenim (1959), a commentary of the tosafists on the Pentateuch from a manuscript in his collection; *Abraham b. Maimon 's commentary on Genesis and Exodus, from a Bodleian manuscript (1965); and an elegant facsimile edition of the Mishnah commentary of Maimonides (3 vols., 1956–66), with an introduction, from manuscripts in his collection and in Oxford, which are claimed to be autographs of Maimonides. He wrote a Critical Study of Electrical Stunning and the Jewish Method of Slaughter (1955) and The Spiritual Heritage of the Sephardim (1957).

Of the original eight brothers, SASSOON DAVID SASSOON (1832–1867), the third eldest and the first to settle in England, was perhaps most active in Jewish communal life in England. In addition to advancing the company's interests there, he was warden of his synagogue, member of the council of the Jews' College, and examiner in Hebrew at the Jews' Free School. His daughter, RACHEL SASSOON *BEER (1858–1927), was the editor of the Sunday Observer and the Sunday Times. On the death of the paterfamilias David Sassoon, Albert assumed the leadership of the company. ELIAS DAVID SASSOON (1820–1880), disliking his subordinate position, left the family business and founded in 1867 a separate and rival firm, E.D. Sassoon and Company. With interests in the Orient, Africa, Europe, and America, the new company prospered even more than the original one. Elias, following the policy of his father, provided his numerous Jewish employees with schools and synagogues even in the company's remotest outposts. His son, Sir JACOB ELIAS SASSOON (1844–1916), expanded his father's business enterprise in India by building a large textile company, which comprised six mills and the country's first dye works. The company was instrumental in developing the cotton textile industry in western India, and in the peak year of 1916 the Jacob Sassoon Mill, India's largest, employed 15,000 workers. In Bombay his philanthropic activities included building the Central College of Science, a general hospital, and the Keneseth Eliyahu synagogue. SIR EDWARD ALBERT SASSOON (1856–1912), the son of Albert Sassoon, married Aline Caroline de Rothschild. Edward Albert was the first Sassoon to choose politics as his profession. In 1899 he was elected to parliament as a member of the Conservative Party, and held this seat until his death. His son, Sir PHILIP SASSOON (1888–1939), won a seat in parliament as a Conservative in 1912 and remained a member until his death. During World War I he served as military secretary to Field Marshal Douglas Haig, commander in chief of the British armies in France. Although privately horrified by the war, he publicly denounced the pacifistic sentiments of his relative, the poet Siegfried Lorraine *Sassoon . From 1924 to 1929, and from 1931 to 1937, Philip was undersecretary of state for air, inPage 71  |  Top of Article which capacity he expressed his love of aviation and his belief in the importance of air power. In The Third Route (1929), he related the story of his 17,000-mile flying tour of British overseas air stations. Philip was also a connoisseur of art of high repute, in recognition of which he was appointed trustee of the National Gallery, the Wallace Collection, and the Tate Gallery, and he was able to display his taste in his last public office as first commissioner (minister) of works, responsible for royal palaces, parks, and ancient monuments. His sister, SYBIL (1894–1989), married Lord Rocksavage, later Marquess of Cholmondeley, alternate hereditary Lord Great Chamberlain. She was a celebrated hostess and deputy director of the Women's Royal Naval Service in World War II. The last important businessman of the dynasty was SIR VICTOR (ELLICE) SASSOON (1881–1961), the son of Sir Edward Elias and Leon-tine Sassoon. Like his forebears, he contributed to the development of industry in India and served as a leader of British Indian Jewry. Victor Sassoon was an air enthusiast and served during World War I in the Royal Naval Air Service, sustaining permanent injuries from a flying accident. He was a member of the Indian Legislative Assembly in 1922–23 and from 1926 to 1929, and after 1933 worked strenuously to help refugees fleeing from Nazism. In 1931 he transferred the headquarters of the E.D. Sassoon Banking Company to Shanghai. After the interests of the company were overtaken by successive Japanese and Chinese Communist occupations, Sir Victor moved to the Bahamas in 1948 and built up new mercantile, banking, and property interests. A famous racehorse owner, he won the Derby four times. Another successful relative of the Sassoons was SIR SASSOON JACOB DAVID (1849–1926), cotton merchant and chairman of the Bank of India, who was the grandson of Elias David Sassoon. Sir Sassoon's son, SIR PERCIVAL DAVID (1892–1964), was probably the foremost collector of Chinese art of his time and the founder of the Percival David Foundation of Chinese Art, the leading British museum of its kind, in Bloomsbury, London. A noted scholar of the subject, he did much to popularize Chinese art in the West. The Sassoon family was one of the most remarkable examples of upward social mobility in British history. Wearing Oriental dress in Baghdad until the mid-19th century, and not resident in Britain until about 1870, by the Edwardian period they had become baronets, associates of royalty, and Conservative M.P.s in Kent.