ACID RAIN BROADLY refers to acidic precipitations—in wet form such as acidic rain, fog, and snow; or in dry form such as acidic gases and particles. Acid rain was first noticed in the late 1960s, when declining fish stocks were observed in Scandinavian lakes, and precipitation was found to be more acidic. Acid rain has also destroyed forests and acidified lakes in Canada as well.

The term acid rain is a misnomer, because even uncontaminated rain has a pH level below 7 and is therefore acidic. The addition of sulphurous and nitrous gases to the atmosphere causes precipitation to become even more acidic as they combine with water. The natural pH of rainwater is about 5.6, but the pH of acidic rain is 4.0–5.0. A decrease of one pH unit represents about a tenfold increase in the acidity of rain.

Acid rain occurs when sulfur dioxide (SO2) and nitrogen oxides (NOx), released from fossil fuel burning and industrial processes, react in the atmosphere with water, oxygen, and other chemicals to form various acidic compounds. Sunlight increases the rate of most of these reactions. The result is a mild solution of sulfuric acid and nitric acid. When this acidic precipitation reaches the ground, it affects plants, animals, fishes, and other living things to varying degrees.

About half of the acidity in the atmosphere is composed of dry depositions blown by the wind onto buildings, homes, trees, etc. When the other half arrives in the form of rain, all of these dry deposits are also washed out. This, in turn, makes the runoff even more acidic and harmful to the environment.

High-altitude vegetation communities are more at risk from acidification because they may be exposed to the cloud bases, which have low pH values due to the acids produced by the reaction of acidification gases with hydroxyl radicals and monatomic oxygen. Areas with “acid” bedrock are also more at risk because they lack buffering capacity; this means these soils are already acidic and hence lack cations such as calcium, which react with acid soil and groundwaters to raise the pH in drainage waters.

Acid rain can also cause extensive damage to buildings, marble sculptures (such as Taj Mahal), limestone, slate, and mortar. These materials become pitted and weakened mechanically as the soluble sulphates are leached out by rainwater. Acid rain also increases the process of weathering.

ACID RAIN IS also known to increase eutrophication. The deposition of nitrogen compounds might favor forest growth, but it disrupts ecosystems on land and in the sea. Although phosphates are the main cause of eutrophication in fresh water, nitrogen (oxides of nitrogen) is the limiting factor on land and in the sea. Nitrogen (in the form of oxides and ammonia) acts as a fertilizer in nature, but this generally means the growth of certain species at the expense of others. The impoverishment of ecosystems that results is also a real and serious problem, and the increased growth rate also increases biological acidification. 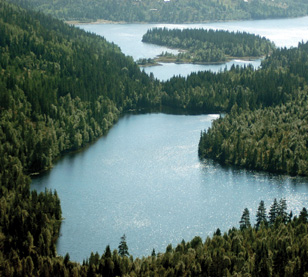 As acid rain flows through soils, both the decreased pH and increased aluminum cause chronic ecosystem stress.

Acid rain causes a cascade of effects in aquatic ecosystems that can harm or kill fishes, reduce fish populations, or even completely eliminate some fish species, thus altering the ecosystem and decreasing biodiversity. As acid rain flows through soils, the element aluminum is released into water bodies in the watershed. Both the decreased pH (high acidity) and the increase in aluminum cause chronic stress on the water ecosystem, which can either kill certain plants and fishes or limit the ability of small fish to compete for food and habitat.

Acid rain causes poor visibility and has an impact on human health. It is known to cause respiratory problems such as dry coughs; asthma; headaches; and eye, nose, and throat irritation. Sulphur dioxide mixes with water vapors and other chemicals in the air, forming sulphate particulates (smog), which is particularly harmful to people with breathing problems.

Acid rain can also harm people through the atmosphere or through the food chain—crops grown in the toxic soil, animals consumed by humans, and by drinking water. This contaminated food has been cited as causing nerve or brain damage in children.

A concern about acid rain and acidification was first raised by a Swede, Svante Oden, in the 1960s. Oden also pointed out that because the cause of acid rain is not just domestic, but due to other countries’ windborne pollution, intergovernmental action was needed to solve such problems. On July 1972, 33 nations convened in Stockholm to draw world attention to acid rain’s ecological threat to Scandinavian countries and Canada. Interestingly, the venue received a heavy downpour of acid rain for the entire week.

An overall understanding of the causes and effects of acid rain, and the remedial actions required, have advanced since the 1960s. Emission controls in both Europe and North America have reduced deposition rates significantly in some parts of the world, and an effort has also been made to recover damaged aquatic ecosystems. In other countries, however, further sulphur reductions are needed to stop the acidification damage to forests, soils, and lakes.

As a society, certain steps can be taken to limit acid rain by controlling the emission of gases such as sulphur dioxide and nitrous oxides (dioxide, monoxide) from fossil fuel burning and industrial processes. The best options are alternative sources of energy—apart from fossil fuels—such as wind energy, hydro power, nuclear energy, and solar energy. Automobile options include more fuel-efficient cars; hybrid vehicles; and natural-gas powered, fuel-cell powered, or battery-powered vehicles.

Another alternative is better emission-control technology, such as improved smokestack and exhaust pipe scrubbers, and using sulphur-reduced coal. Because acid rain is also linked to other environmental problems, such as climate change, society and individuals must try to help control acid rain.