In literature that explores the issues of race and prejudice, religion often emerges as the foundation of conflict and divisiveness between individuals or groups. This is not surprising, since such literature by definition centers on ideas of exclusion and intolerance. In addition, religions are often closely associated with specific ethnic or racial groups, as with Judaism; in these cases, religion can become a source of persecution for a character or group. However, religion can also appear as a positive force that unifies and sustains those who endure suffering borne of racism and prejudice.

Arthur Miller's The Crucible (1953) is a classic example of how religion can become a lightning rod for hysteria that divides a community and targets individuals for persecution. The play depicts the infamous witch trials in Salem, Massachusetts, in 1692. In the drama, the townspeople engage in a frenzy of accusation and confession that culminates in the hangings of several innocent people. The charges that fracture the austere Puritan community center on people suspected of interacting with the devil. Once indicted, a defendant can either confess to the sin and implicate others, or face death. These accusations are made based on personal grudges and prejudices instead of evidence, and the Page 557  |  Top of Article 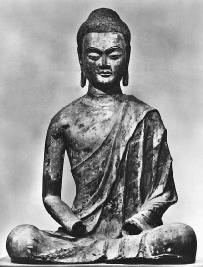 A T'ang-era figure of the Buddha seated sitting cross-legged ruling bodies equate protestations with guilt: as Deputy Governor Danforth puts it, "you must understand, sir, that a person is either with this court or he must be counted against it, there be no road between." Although people's religious beliefs are apparently behind the persecution in the play, the work also parallels the entirely political movement of McCarthyism that was sweeping the nation at the time it was written.

Religion is also a divisive force in Midnight's Children (1980), by Salman Rushdie. The novel parallels the rise of India as a free nation with the birth and growth of two Indian boys—one Muslim, one Hindu—who are switched at birth. The book illustrates the devastating effects of religious intolerance and separatism, depicting the chaotic formation of the Muslim and Hindu nations of Pakistan and India, as well as the later independence of Bangladesh. At the same time, Rushdie demonstrates how people's religion is often simply a trait assigned by their birth.

In The Crusades Through Arab Eyes, Amin Maalouf offers a historical account of the medieval Euro-Christian assault on the "holy lands" from the perspective of the Muslims who fended off the Christian intruders, a point of view rarely presented. Here, religion serves two purposes that might seem contradictory: Christianity is used to unify Europeans in their desire to reclaim the holy lands, while at the same time casting those of any other religion as unfit to care for such a sacred place. Ultimately, religion acts as a unifying force, bringing together different Muslim groups in the region to repel the invading Christian hordes.

Religion also serves a dual purpose in Graham Greene's The Power and the Glory (1940; first published in the United States under the title The Labyrinthine Ways). In the book, a Catholic priest discovers he is the last of his kind in the Tabasco region of Mexico, where Communist revolutionaries have forced all other priests to either flee or renounce their faith by marrying. The goal of the revolutionaries is simple: "No more money for saying prayers, no more money for building places to say prayers in. We'll give people food instead, teach them to read, give them books. We'll see they don't suffer." The priest's insistence on continuing to serve his followers makes him a target and eventually leads to his execution. In the end, the priest tells his captor that "if there's ever been a single man in this state damned, then I'll be damned too." The priest accepts his fate. Although he has more than one opportunity to Page 558  |  Top of Article 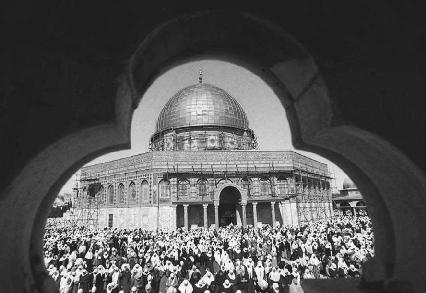 Muslims in prayer near the Dome of the Rock Mosque, Jerusalem Khaled Zigari / AP Images escape unharmed, his duty to his religion is more important than his own well-being. In this way, religion sustains his spirit even as it is the very reason for his persecution.

A similar situation exists for Primo Levi and his fellow Jews in "A Good Day," a chapter from Levi's memoir Survival in Auschwitz (1947). As they journey to the factory where they are forced to work, the prisoners see the hills that mark the gas chambers at Birkenau, where they believe they will soon meet their end. They are all resigned to this fate except "a group of Greeks, those admirable and terrible Jews of Salonica," whose faith leads them to sing songs of their upcoming freedom. All ten thousand in their camp are imprisoned simply because they are Jews; their nationalities range from Italian to Polish to Greek, but their religion means that they are all equally condemned. Here, the faith that dooms them also sustains some of them. However, Levi points out that in such dire circumstances—bitter cold, starvation, hard labor, hopelessness—their "only purpose is to reach the spring."

The trappings of religion are used to explore race and ethnicity in Jhumpa Lahiri's "This Blessed House," found in her short story collection Interpreter of Maladies (1999). In the story, a newly wedded Indian American couple discovers many Christian ornaments scattered throughout the house they have just purchased. Sanjeev, the husband, wants to throw them out since he and his wife are not Christian; however, his wife—who goes by the name Twinkle—finds them beautiful. She begins to display them on the mantle above the fireplace, partly because she enjoys them and partly because she feels a need to assert some level of independence in their relationship. Sanjeev is worried only that others will see the artifacts and incorrectly assume the couple is Christian. He implies a certain prejudice toward Christian Indians. Ultimately, the objects help the couple define their expectations for each other in their new marriage. Page 559  |  Top of ArticleThe artifacts themselves hold power beyond their religious association.

Religion is often intertwined with ethnic or racial identity and is therefore a common sub-theme in literature dealing with race and prejudice. Religion is sometimes presented as the basis for discrimination, but it can provide the strength that helps the persecuted endure and the inspiration that helps the persecutors discover their humanity. As in life, religion may have as many purposes in literature, the best of which will instruct, inspire, and elevate.