About the Artist: E.W. Gustin was a noted political and editorial cartoonist in the United States in the early twentieth century. A number of Gustin's cartoons that pertain to women's issues are maintained in the collections of the Library of Congress.

At the time of the publication of the political cartoon Election Day, the political lobby that had become known as the suffragette movement in both the United States and in England had been a feature of the national politics in each country since the 1840s. In that period the first pamphlets were circulated in both countries urging the reform of election laws to permit women to vote. The first American women's rights convention was held in 1848, organized by advocates that included Elizabeth Cady Stanton (1815–1902); the right of women to vote was a center piece of the Declaration of Sentiments published after the convention was concluded.

"Suffragette" was a term coined in the latter part of the nineteenth century to describe a female supporter of the extension of the vote to women in political elections. A "suffragist" was a unisexual term describing such supporters irrespective of their gender.

In the early days of agitation for voting reform, the right to vote tended to be advanced by women's groups along with a broad range of issues that included women's property rights, more equitable divorce laws, better access to higher education, and employment equity. Two distinct events, one in the United States and another in Great Britain, propelled Page 255  |  Top of Articlethe formation of distinct suffragette movements in each country. The English legislation known as the Second Great Reform Act in 1867 attracted significant debate regarding women's voting rights; one of the notable champions of the cause was the English philosopher and political commentator John Stuart Mill (1806–1873). When the efforts to include women's voting rights in the legislation failed, the suffrage movement had its first formal organization, the National Society for Women's Suffrage.

In 1893, the former British colony of New Zealand became the first nation to permit women to vote. This further development led to the more forceful agitation by suffrage groups in England until the beginning of World War I in 1914.

In the United States, voting rights were extended to the emancipated black population and recently emigrated foreign men after the conclusion of the Civil War in 1865. The exclusion of women in the face of these developments was a powerful spur to the women's movement. A notable early example of public attention called to the issue was the attempt by women's leader Susan B. Anthony (1820–1906), co-founder of the national Women's Suffrage Association in 1869, to vote in the presidential elections in Rochester, New York in 1872, actions that lead to her prosecution and a favorable public reaction.

The later American suffragette leadership, including Lucy Burns (1879–1966) and Alice Paul (1885–1977), had ongoing contact with their British counterparts in the suffragette movement. In the United States, the suffragettes tended to organize generally peaceful political protests; the English suffragette campaign in the early 1900s was marked by a number of examples of violence, including arson.

A number of American states moved to permit women to vote prior to 1920; Jeanette Rankin of Montana was elected to the House of Representatives in 1916. The Nineteenth Amendment to the United States Constitution securing the right of women to vote was ratified on August 26, 1920. The British House of Parliament enacted legislation in 1918 that permitted women aged thirty or older to vote; full voting rights to adult women were extended in 1928. 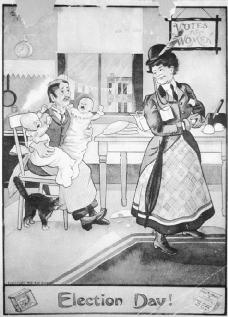 PRIMARY SOURCE Election Day!: An editorial cartoon from 1909 depicting a woman going to vote on Election Day. It implies that giving women the vote will cause them to abandon their traditional work in the home. The Library of Congress.

When the cartoon was published in 1909, the entrenchment of voting rights for women in the United States was eleven years away. The domestic scene depicted in the E.W. Gustin work is a subtle depiction of what the artist anticipates will be the ultimate outcome of the suffragette movement.

The cartoon contrasts two figures. At the door is a rather formidable appearing woman preparing to go out and cast her vote. Her bewildered looking husband with two unhappy twin babies on his lap remains behind, a figure of confusion. The broken plate on the kitchen floor and the washing visible through the window enhance the artist's suggestion that the husband has significant domestic responsibility in his wife's absence, and that the husband seems ill-equipped to discharge those duties. 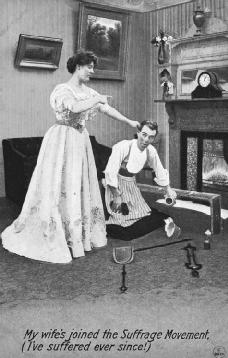 This 1910 postcard plays on fears about the effect womens suffrage might have on family life. © Lake County Museum/Corbis.

In the bottom right corner of the cartoon is a leaflet for the Hen Party. "Hen" was a well established and somewhat dismissive slang term often used in this period to describe a woman, and a "hen party" is an expression that refers to a social gathering of women. In the political context of the women's vote and an election day, hen party represents a clever play on words by the cartoonist. His usage of the expression in this context is significant because any political party described as the Hen Party could readily be taken as a ridiculing of the forces behind the suffragette movement in 1909.

In 1909, the relationship between the suffragette movement and the various groups that advocated the broader reform of the status of women in American society can be summarized by the aphorism, "all feminists are suffragettes, but not all suffragettes are feminists." Feminism as a term used by those favoring the advancement of women's rights dates from approximately 1890 in the United States.

At the time of the 1909 cartoon, there were three distinct aspects to the feminist movement in the United States, with the beginnings of each component of the movement dating to approximately 1870. The first was the suffrage movement; towards the end of the nineteenth century, this group emphasized that the Victorian ideal of the woman as being a purer and better person than a man was a sound basis as to why women should be voting. This group urged reform on the basis that women would not be corruptible in political matters and therefore better voters than men. These suffragettes restricted their public advocacy to the right of women to vote.

The second aspect was a group that may be described as the social feminists. One of their prominent leaders was Carrie Chapman Catt (1859–1947), the founder of the National American Women Suffrage Association in 1895. After the passage of the Nineteenth Amendment, Catt organized the League of Women Voters in 1920. The social feminists directed their political efforts to the use of the vote to achieve social change.

Radical feminism comprised the third part of the movement; this constituency launched comprehensive attacks on the structure of American society as it related to women. Radical feminism is very much an expression to be taken in its context, as arguments that were radical in the early 1900s are today a part of the mainstream, particularly those respecting employment equality for women and the freedom of women to work outside of the home environment.

While the domestic scene depicted in the 1909 cartoon was a humorous forecast of what might occur upon the extension of the franchise to women in America, the final significant impetus to the securing of the vote was World War I. As men were dispatched overseas in the conflict, American women entered the workforce in then non-traditional jobs. As it became apparent that women could capably carry out work that had been the preserve of men until the war, the arguments in favor of women's suffrage became more widely accepted.