Coffee is the world's most common source of caffeine, providing a little more than half of all caffeine consumed daily. In the United States, coffee is usually a beverage made by percolation or infusion from the roasted and ground or pounded seeds of the coffee tree (genus Coffea), a large evergreen shrub or small tree, which was native to Africa but now is grown widely in warm regions for commercial crops. Caffeine from coffee accounts for an estimated 125 milligrams of the 211 milligrams of U.S. caffeine consumed per capita per day. Recent estimates suggest that more than 50 percent of the adolescents and adults in the United States consume some type of coffee beverage. Coffee is one of the main natural commodities in international trade, ranking second only to petroleum in dollar value. Approximately fifty countries export coffee and virtually all of those countries rely on it as a major source of foreign exchange. An estimated 25 million people make their living in the production and distribution of coffee products.

In addition to caffeine, roasted coffee contains at least 610 other chemical substances, which may contribute to its smell, taste, and physiological effects. 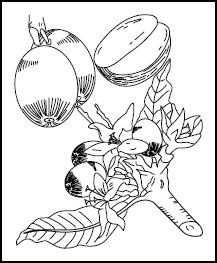 Nevertheless, coffee's primary psychoactive ingredient is caffeine. The amount of caffeine in an individual cup of coffee varies considerably, depending on the type and amount of coffee used, the form of the final coffee product (e.g., ground roasted or instant), and the method and length of brewing. On average, a 6-ounce (177 milliliters) cup of ground roasted coffee contains about 100 milligrams caffeine; the same amount of instant coffee typically contains about 70 milligrams caffeine. However, the caffeine content of any given 6-ounce cup of coffee can vary considerably and can reach as much as 210 milligrams. Drip coffee typically contains more caffeine than percolated; decaffeinated coffee contains a small amount of caffeine, approximately 4 milligrams in a 6-ounce cup. Individual servings of caffeinated coffee contain amounts of caffeine that have been shown experimentally to produce a range of effects in humans including the alteration of mood and performance and the development of physical dependence with chronic daily use.

Coffee cultivation probably began around 600 CE in Ethiopia, but the drink was spread into the Middle East and Europe. Today, much of the world's coffee is grown in South and Central America, particularly Brazil and Colombia, and in several African countries. Coffee beverages derive primarily from the seeds of two species of Coffea plants, Coffea arabica and Coffea canephora var. robusta. Robusta coffees contain approximately twice as much caffeine as Arabicas. Arabica beans are used in the majority of the coffee consumed today, particularly in the higher quality coffees. Since processing for instant and decaffeinated coffee extracts flavor components from the bean, the stronger flavored beans, typically Robusta beans, are used for these coffee products. Caffeine extracted in the decaffeination process is sold for use in soft drinks and medications.

The coffee bean, covered with several layers of skin and pulp, occupies the center of the coffee berry. During the first part of coffee production, the outer layers of the coffee berry are removed, leaving a green coffee bean. The beans are then roasted, removing between 14 and 20 percent of their water and changing their color from green to various shades of brown; generally, the beans get darker as more water is extracted. The beans are then ground and ready for use. To produce instant coffee, roasted and ground coffee is percolated to produce an aqueous coffee extract. That extract is dehydrated by spray or freeze-drying to produce water-soluble coffee extract solids. Since this process removes flavor and aroma from the coffee, compounds are added to the extracts at the completion of the process to restore the lost characteristics.