The Diary of Anne Frank

The Diary of Anne Frank

The Diary of Anne Frank (also published as Anne Frank: The Diary of a Young Girl) was written between 1942 and 1944 by a young Jewish girl hiding from the Nazis in German-occupied Holland. The diary begins on June 12, 1942, twenty-eight days before she entered hiding, and ends on August 1, 1944, a few days before she and her family were arrested. Three versions of the diary exist: one that Frank started in 1942 (at age thirteen) for personal use (known as version A); a second, self-redacted version begun in 1944 (version B) after she heard on Dutch radio that letters and diaries of ordinary citizens might be collected after the war; and a third version (version C) pieced together after the end of the war by Frank's father, Otto, who published the diary after Anne and the rest of the family perished in Nazi concentration camps. By 1986 the book had sold sixteen million copies internationally. It continues to hold scholarly interest in the twenty-first century.

When Frank's diary was published in 1947, Otto was the only member of the family still alive. After Nazis discovered the Franks' hiding place in 1944, Anne and her sister, Margot, were shipped to the Bergen-Belsen concentration camp, and their parents ended up at Auschwitz-Birkenau. Bergen-Belsen was rife with poor sanitation, overcrowding, and disease, including typhus, which killed both sisters. As the world reacted with horror in the years after the war, when the truth about the concentration camps emerged, Anne's diary was received with a great deal of sympathy.

According to the United States Holocaust Memorial Museum, keeping diaries was a common practice among “children of assimilated Jewish parents from Germany, Austria, or the Czech lands” who left their homes in hopes of escaping Nazi persecution. The Franks were among the 34,000 German Jews who sought refuge in Holland after the Nuremberg Laws were enacted in 1935, criminalizing sexual relations between Jews and gentiles, decreeing that Jewish children could only attend Jewish schools, making it illegal for Jews to own businesses, and otherwise limiting the freedoms of Jews. In 1942, amid mounting pressure from the Nazis, Hermine (Miep) Santrouschitz helped hide the Franks in a building owned by the company she and Otto worked for, in a space they called “the secret annex.” Santrouschitz and others ensured that the Franks, along with a dentist separated from his gentile wife and another family of three, maintained their connection with the outside world, bringing them newspapers, books, and magazines and helping Anne and Margot take correspondence courses.

Among the surviving diaries of European Jews living at the time of the Holocaust is the journal of Etty Hillesum, published in 1981. In the diary she describes her internment at the Westerbork detention camp before she boarded a train for Auschwitz, where she died. Miriam Wattenberg, whose family made it safely from Poland to the United States thanks to her mother's American citizenship, published a diary under the pseudonym Mary Berg, which she began in 1939 and which covered her family's time living in the Warsaw ghetto. Published in February 1945, Wattenberg's diary is one of the earliest published firsthand accounts of the atrocities committed by the Nazis. Jewish student David Koker's diary, At the Edge of the Abyss: A Concentration Camp Diary, 1943–1944, was translated from Dutch into English in 2012.

Otto's edition of his daughter's diary was published in Holland as Het Achterhuis (The Secret Annex) in June 1947 to warm critical reception. Subsequent translations into French (1950), English (1952), and German (1955) also proved successful. In the 1950s, New York Times reviewer Meyer Levin called for the book to be made into a play and a film. Although he insisted on writing it himself and pressured Otto to award him the contract, Otto and the project's backers rejected the script. Instead a script by Albert Hackett and Frances Goodrich was used for the stage and screen versions. American playwright Wendy Kesselman later gave the play new life in a 1997 adaptation.

The Diary of Anne Frank often focuses on the author's thoughts about being stuck between childhood and young adulthood. Entries appear almost daily and include, at times, transcribed poems and letters, photographs, a group of notes addressed to fictional characters from Dutch literature, and other digressions from prose. Along the way, she makes sharp and often funny observations about the world around her. She is at her best when observing human behavior, including her own. An early, presecret annex entry describes “one of 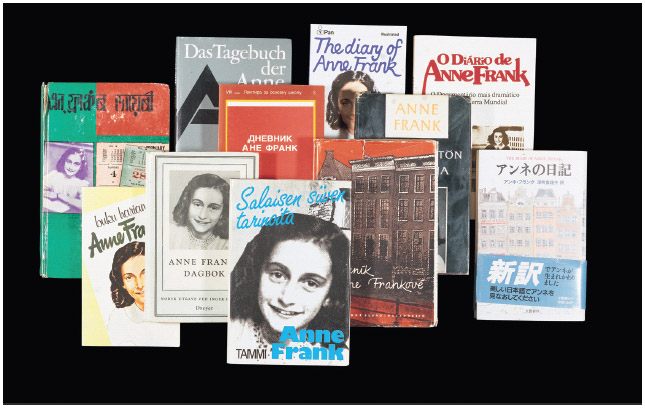 Various copies of Anne Frank's Diary of a Young Girl, which has been published in some 60 languages. © ANNE FRANK FONDS/ANNE FRANK HOUSE/GETTY IMAGES

my slightly melancholy days while I sat chin in hand, feeling too bored and limp to even make up my mind whether to go out, or stay at home.” She observes of her family, “Daddy's the only one who understands me occasionally, but generally he sides with Mummy and Margot.” She also voices complex thoughts typical of a teenage girl: “I know that I am far from being as I ought to be; will I ever be?”

At first, she considered the diary a substitute for the kind of friend she felt was missing from her life. An early entry reads, “Dear diary, I hope no one will ever read you except my dear sweet husband.” She often addresses her entries to “Kitty,” imagined as “the girl next door,” with “a wine-red velvet frock for Sundays and a cotton one for every day; she has pale-blond hair with tiny braids, and clear blue eyes.” Frank began version B of the diary after hearing a Dutch MP on the radio saying that wartime diaries and letters should be collected. In anticipation of submitting her diary, she reworked and added to some of her earlier entries. “No one will grasp what I'm talking about if I begin my letters to Kitty just out of the blue,” she writes, proceeding to tell “the story of my life, much as I don't like to.”

Initial critical response to Frank's diary was colored by the emerging discovery of Nazi atrocities committed against Jews, homosexuals, gypsies, and others. The Diary of Anne Frank was welcomed as a ray of light in the darkness that followed the war. After the success of the book's first Dutch edition in 1947, Otto commented, “If she had been here, Anne would have been so proud.” In a June 1952 preface to the first American printing, former first lady Eleanor Roosevelt calls the diary “one of the wisest and most moving commentaries on war and its impact on human beings that I have ever read.”

The Diary of Anne Frank has become a mainstay of school curricula throughout the Western world. Writing for the English Journal in 1968, teacher Elizabeth A. Mapes recommends both the book and play for junior high school students: “By the time that they are thirteen or fourteen, most students are already sharing Anne's inner turmoil about sex and parents and are beginning to be interested in moral questions, such as, in Anne's case, those raised by the Nazi persecutions.” However, some critics have complained of whitewashing in both the print and film versions. Twelve years after the 1986 critical edition was published, five omitted pages surfaced, three of which, write Hyman A. Enzer and Sandra Solotaroff-Enzer, editors of Anne Frank: Reflections on her Life and Legacy (2000), “contain Anne's observation that Otto lacked passion for his wife, Edith.” Scholars continue to investigate the implications of the different versions,

the circumstances surrounding the Franks' capture, and how Anne and Margot fared in the concentration camps before they died.

Recent scholarship has envisioned the diary as presenting an alternate universe to the one in which it was written. In a 1994 article for Utopian Studies, Barbara Chiarello sees the diary as describing a utopia: “Anne's diary not only lists her experiences, it provides a blueprint on how to live … Anne's humor—part of her coping arsenal—takes the sting (and boredom) out of the didactic nature inherent in many utopian works,” such as George Orwell's 1984 (1949). Gene A. Plunka writes in South Central Review in 2009 that Holocaust survivor Nelly Sachs's Eli: A Mystery Play of the Sufferings of Israel (1943) and The Diary of Anne Frank “transcend the Holocaust by universalizing the experience,” turning it into “a momentary phase of history in which evil temporarily triumphed over good.”

A museum dedicated to Anne Frank now occupies the space where she hid with her family. Attracting more than a million visitors in 2012, the museum also maintains the letters of Otto Frank. The museum reports that as of 2013, 263 schools in fourteen countries are named for Frank, with the mandate that “A school bearing the name of Anne Frank obliges itself to stand up for freedom, justice, tolerance and human dignity and to resolutely turn against any form of aggression, discrimination, racism, political extremism and excessive nationalism.”

Twenty-first century writers have kept Frank alive in readers' imaginations. Poet Wallis Wilde-Menozzi's 2002 poem “Nearing Anne Frank” features a character recalling her childhood internment in Auschwitz, where one night “another child put a comforting hand, / numbered and half-dead, / on her tiny shoulder. The older girl / whispered rain-filled stories to her” (the older girl is Frank). Poet Mike White's 2004 “Anne Frank, Postscript” conveys the young writer's sense of wonder even when faced with disaster: “I caught my death / in the winter of the year, / when the fresh snow was falling / I caught it, amazed, / on the ready tip of my tongue.” By contrast, Shalom Auslander's novel Hope: A Tragedy (2012) paints an absurdist tale of Frank as an embittered old woman living in the attic of a farmhouse in rural New York.

Enzer, Hyman A., and Sandra Solotaroff-Enzer, eds. Anne Frank: Reflections on Her Life and Legacy. Urbana and Chicago: University of Illinois Press, 2000. Print.

Berg, Mary. The Diary of Mary Berg: Growing Up in the Warsaw Ghetto. London: Oneworld, 2006. Print.