The myth of Oedipus concerns the Theban king who unwittingly murdered his father and married his mother. The story is best known from Sophocles's Oedipus Tyrannus (c. 429–425 BCE, also called Oedipus Rex), regarded by Aristotle as a masterpiece of Athenian drama because Oedipus's discovery of his identity coincides with his reversal of fortune. Sophocles's tragedy influenced subsequent dramas, including Seneca's Oedipus (mid-first century CE) and Jean Cocteau's The Infernal Machine (1934). Basing his theories on Oedipus Tyrannus and the myth outside the play, Sigmund Freud universalized Oedipus's story into a familial conflict waged within a child's psyche. To mature, we must resolve our "Oedipus complex," our unconscious antagonism toward the parent of our own sex and attraction to the parent of the opposite sex.

Oedipus dominates Oedipus Tyrannus from the beginning, when a plague at Thebes inspires him to seek its cause. After his brother-in-law Creon returns from Delphi with Apollo's command that the murderers of the former king Laius be found, Oedipus condemns the murderer—a Freudian slip perhaps?—to exile and a wretched life. Since no one confesses, Oedipus consults the blind seer Tiresias, to no avail. Oedipus accuses Tiresias of conspiring in Laius's murder and in Creon's plot against Oedipus. When Tiresias calls Oedipus the murderer, Oedipus mocks the prophet's gifts, since he alone solved the sphinx's riddle years before. Tiresias then sets Oedipus another riddle: "Who are your parents?"

Jocasta, Oedipus's wife and Creon's sister, advises Oedipus to disregard the Delphic oracle: Laius, predicted to die at his son's hand, was murdered by robbers, while her infant son by Laius was exposed, feet pierced, on Mount Cithaeron lest he eventually kill his father. However, Jocasta mentions that Laius died at the crossroads between Thebes and Delphi—a crucial detail. Before coming to Thebes, Oedipus had been raised by Polybus and Merope, the king and queen of Corinth. But after being called a bastard by a drunk, Oedipus left Corinth for Delphi, where Apollo prophesied that Oedipus would bed his mother, spawn a brood unbearable to see, and murder his father. Oedipus fled Delphi toward Thebes, only to be attacked at that fatal crossroad by an old man and his retinue. Oedipus retaliated, killing them all. If that man was Laius, Oedipus must be the murderer.

Jocasta insists that an eyewitness, the lone survivor of that attack, still lives. Meanwhile, a man from Corinth announces the death of Polybus by natural causes and invites Oedipus "home" to claim the throne. When Oedipus nevertheless fears Merope, Jocasta famously responds: "As for this marriage with your mother—have 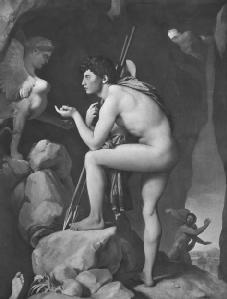 Oedipus Consulting the Sphinx. © Bettmann/Corbis. no fear. Many a man before you, in his dreams, has shared his mother's bed" (Sophocles, 1073–1075, Fagles's translation). The Corinthian declares that Polybus and Merope had adopted Oedipus, that he himself had obtained the baby from a Theban shepherd, and that Oedipus's name, "swollen-footed," derives from his pierced ankles. Realizing the truth, Jocasta begs Oedipus not to interview the shepherd, whom the Chorus also identifies as the witness to Laius's killing. She disappears as Oedipus learns from the aged shepherd the last detail of the riddle: He, the baby saved so long before, is Laius and Jocasta's son. Oedipus storms into the palace, discovers Jocasta hanging from a noose, and blinds himself with the brooches fastening her dress—a symbolic castration and iteration of their incest. Rejecting the superficiality of sight, Oedipus acquires Tiresias's deeper knowledge of the relationship between past and present (as suggested by his name's resemblance to the verb (oida: "I know"). Though horrified, the Chorus offers sympathy. Creon allows Oedipus to embrace his young daughters and promises them protection. By the end, Oedipus has so regained his authority that Creon must remind Oedipus that he no longer rules Thebes.

Sophocles's Oedipus at Colonus (c. 405 BCE) continues with Oedipus's final day. Exiled from Thebes, Page 1085  |  Top of ArticleOedipus has wandered for years accompanied only by his daughter Antigone and kept informed by his other daughter Ismene. Near Athens, he unknowingly violates another taboo when trespassing on the grove of the Furies, chthonic goddesses of fertility and vengeance. Recognizing his true "home," he offers Theseus, the virtuous Athenian king, the benefit that Oedipus's burial will bring against Theban attack. Theseus welcomes and defends him against both Polyneices (Oedipus's elder son and commander of a force against Thebes), and Creon (representative of Oedipus's younger son, Eteocles, who recently usurped the Theban throne from Polyneices). Oedipus's male relatives hope to enlist Oedipus in their civil strife, though Creon and Eteocles won't allow him back into Thebes, and Polyneices wants his help in assailing the very city for which he sacrificed so much. When Oedipus refuses, Creon attempts to kidnap Antigone and Ismene, thus earning Oedipus's curse. Later, after Oedipus curses his sons to kill one another, Polyneices rejects Antigone's plea not to attack Thebes, and makes her promise to bury him—the fulfillment of which leads to Antigone's own death in Sophocles's Antigone (c. 441 BCE). Oedipus at Colonus ends with Oedipus guiding Theseus to his burial site, known only to the Athenian king and his heirs, and the gods calling Oedipus to them. (Oedipus's only counterpart in Greek myth is Zeus, who hurls his father, Cronus, to Tartarus in Hesiod's Theogony, and, according to Orphic literature, mates with his mother, Rhea, to produce Demeter.)

Earlier versions of the Oedipus myth, though fragmentary and difficult to assess, suggest that discovery of the murder and incest occurred almost immediately (Homer, Odyssey 11.271-280); that Oedipus continued ruling Thebes and died there (Homer, Iliad 23.679-680); that another wife bore Oedipus's children after Jocasta's suicide (Oedipodeia); that Laius raped the son of his host Pelops, thus dooming his own family (Aeschylus, Laius); or that Oedipus's curse caused his own sons' strife (Thebais). Influenced by Seneca, later works emphasize Oedipus's nobility in enduring malevolent fate, his role as sacrificial scapegoat, his guilt as personified by Laius's ghost. Post-Freudian versions eroticize the incest.

The brilliance of Sophocles's interpretation cannot be overstated. In Oedipus Tyrannus, Oedipus's explosive reaction towards three father figures—Tiresias, Creon, and the Shepherd—echoes his earlier violence against Laius. Yet, to save Thebes, Oedipus perseveres publicly and heroically in identifying himself as Laius's murderer(s). The confusion between singular and plural emphasizes Oedipus's multiple identities as Theban native and stranger, Jocasta's son and husband, his children's father and eldest brother. Having saved Thebes from the sphinx, Oedipus won Jocasta and the throne; nevertheless, his own sons continue to treat him as Thebes' pollution in Oedipus at Colonus and quarrel over his throne rather than tend him, thus prompting his furious rejection of them as patricides (1540–1550). Athenian law punished sons severely for such neglect, and Oedipus states that only barbarians loiter within while their women toil outside the home. Before being transformed into a cult hero resembling the Furies, Oedipus finds in Theseus the ideal son and, in Athens, a city meriting his eternal protection. But "adopting" Theseus reduces Antigone and Ismene from caregiving "sons" to daughters dependent upon surrogate fathers (Theseus, Creon). Sophocles's Antigone witnesses the demise without issue of Oedipus's line, as Creon compels Antigone to choose between two duties traditional to women: marrying (his son Haemon) to produce children, or burying her kin (the traitor Polyneices). However unintentional, Oedipus's transgressions against father and mother ultimately doom every family member, no matter how exemplary.