Defining Medieval Theater. Because most early playwrights and performers were wandering minstrels, they were suspect in the eyes of local authorities and the Church. During the eleventh and twelfth centuries, however, these groups began to find powerful patrons, and eventually even cities and the craft guilds in them sponsored performances of plays. Medieval theater took many forms that were quite different from most modern conceptions of drama and staging. In fact, many early plays were essentially chanted poetry or set pieces in which the figures on stage did not move while a narrator explained, in poetic meter, the significance of the scene being portrayed. For example, at Easter a play concentrating on the adoration of the cross might have several individuals kneeling before a cross staring worshipfully at Jesus. (Nativity plays in which the birth of Jesus is illustrated with living figures, who remain silent throughout a reading of the appropriate scriptures, are modern descendants of these performances.) Moreover, the medieval terms used to describe theatrical styles drew on classical definitions that have unusual connotations for modern readers. For the medieval writers, tragedy was a story told in a high style and usually concerned with important people; it began in a happy mood but ended sadly. A comedy was a story that was narrated in an everyday manner about ordinary matters, and it ended happily ever after.

Early Theater and the Church. From its inception, the Christian Church had mistrusted playwrights and performers, and such suspicion was apparently one of the factors that contributed to the decline of theater after the fall of the Roman Empire. Yet, the revival of theater in the Middle Ages was tied to its use in Christian liturgy. Beginning in the ninth century small texts of one to five lines (known as tropes) were inserted in religious services to amplify some passage of the liturgy, particularly at major feasts such as Easter and Pentecost. By the later tenth century, these tropes had started to expand into brief plays. The earliest of these are the Quern quaeritis (Whom do you seek?) plays, which consist of lines exchanged between the three Marys as they approached Christ’s tomb. These set pieces evolved into short liturgical plays with characters, additional dialogue, props, costumes, and stage directions; church vestments and music were also used. Other brief plays were

[This text has been suppressed due to author restrictions]

developed for Christmas and Twelfth Night (6 January). These plays were inserted in the liturgy throughout the Middle Ages as a means of teaching the generally illiterate population important doctrines and episodes in Christian history. Medieval religious drama thus had three main functions: to provide religious instruction, to encourage piety, and to establish and support Christian faith. The clergy had some difficulties, however, in enforcing these goals. The plays were quite popular, and eventually the slapstick humor and off-color puns employed to catch the audience’s attention led the clergy to remove these plays from the church and even to stage their own instead. In so doing, they increased church attendance so much that the plays had to be moved from the altar to the churchyard and 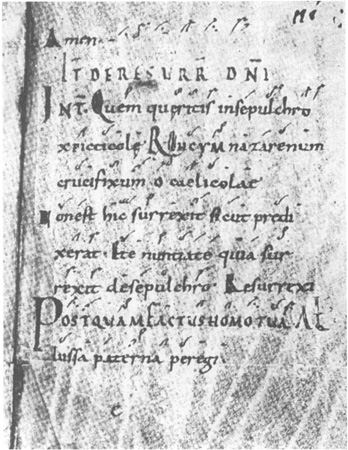 Text, with musical notation, for a Quern quaeritis play performed at the monastery church at St. Gall, Switzerland, during the tenth century (from Glynne Wickham, The Medieval Theatre, 1974)

eventually to public squares. The further the plays got from the church the less control the clergy had over their contents, even when they supplied some of the actors and the funding. The situation grew so out of hand, from the clergy’s perspective at least, that by 1210 a papal edict forbade the clergy to act in churches. The clergy did, however, continue to have some involvement with dramatic productions. From the late eleventh century through the end of the Middle Ages, extended tropes were developed that told the lives of the saints, particularly St. Nicolas, St. Paul, and St. Catherine. Unlike most other tropes, these were performed primarily in monasteries and cathedral schools.

Mystery Plays. One of the favorite styles of medieval theater was the mystery play. The name may come from the claim that it illustrates the “mysteries” of Christianity, or it may be rooted in a guild’s responsibilities for the “mastery” (pronounced mystery) of its craft; from there the plays guilds produced became known as mystery plays. Whatever the origins of the term, these plays developed from the extended tropes that were part of the medieval liturgy, and they flourished after the clergy distanced itself from public drama in the thirteenth century. The groups responsible for staging these plays became the town guilds, which produced a cycle of plays on feasts and holy days. Guild members filled the major roles, directed the plays, and supplied sets and props for what was an all-day entertainment. For example, early in the morning they might stage a play about the creation of the world or the fall of Satan, then they could continue during the day with plays illustrating various biblical episodes; the Flood, the harrowing of hell, the crucifixion, and Abraham and Isaac were all popular plays. The day would typically end with a depiction of the Apocalypse and the Last Judgment. The production of these mystery plays received a boost in 1264, when the Pope established the Feast of Corpus Christi, which celebrated Christ’s redemptive power. Because this feast was Page 88  |  Top of Articlenot dedicated to a specific saint or event, it gave celebrants great freedom, and by the fourteenth century it became the primary festival where guilds sponsored religious plays that portrayed the history of the world from creation to judgment. These cycles provided the audience with a Christian history that emphasized God’s plan and support for all mankind.

The York Cycle. Although most surviving cycles of mystery plays date from the fifteenth century, a few examples of earlier works have survived, especially from medieval England. Of these the Chester cycle (named for the city in which it theoretically originated) is the oldest. The most complete and most influential is the York cycle. The York cycle of plays began in the fourteenth century and was clearly a local affair. The performances were in English, used costumes from everyday life that were designed specifically for the plays, and were staged in the streets, public squares, and town halls by amateur actors affiliated with the guilds, which fronted the cost of the productions. Staging these plays was no minor endeavor; the York cycle grew to include more than three hundred speaking parts. The city and guilds were willing to support these performances because of the wealth and prestige they gave to the city and the professional associations. For example, goldsmiths who provide elaborate props for the Adoration of the Kings play advertised their craftsmanship and artistry to potential buyers. The York plays followed a typical pattern for mystery plays, covering from the creation to doomsday with a series of biblical stories placed in between. In addition, they included some legendary figures, such as the English folk hero St. George.

Farces and Secular Spectacles. At the same time tropes moved from the church to the courtyard, a series of other, more-secular plays were developed and gain, favor in the expanding court society of medieval Europe. These plays took several forms. Common types were morality plays such as Everyman that deal with everyday matters and do not include saints or biblical themes. Mimes, dancers, and contortionists could be found in major population centers. Courts sponsored highly staged jousts and tilts, and knights even held mock battles and sieges. In medieval Spain, one form of “dramatic” entertainment had courtiers using oranges as weapons in “sea battles” against fire-breathing dragons and sea monsters. The most widespread of the secular dramas was the farce, a development of the twelfth and thirteenth centuries. Two writers from northern France were particularly important in its growth: Jean Bodel (1165–1202) and Adam de la Halle (died in 1287 or 1288). One of Bodel’s best-known works was the play of St. Nicholas, about St. Nicholas of Bari, one of the medieval figures that also provided the basis for later Santa Claus stories. Although Nicholas lived in the fourth century, Bodel set the play in the late Middle Ages in a society where both Christians and Muslims lived. He developed a series of comic scenes in which Nicholas loses his temper, but over the course of the play Nicholas gains control. The play ends with a moral about the virtues of charity and patience. Nearly one hundred of Adam de la Halle’s poems, plays, and songs have survived, testifying to his productivity and popularity. Unlike many medieval playwrights, he was willing to address contemporary, and potentially dangerous, topics. He even wrote a farce about the Sicilian Vespers, the famous revolt of the Sicilians orchestrated by Spain against Charles of Anjou, King of Sicily, in 1282.

Staging Medieval Plays. The tropes of the ninth and tenth centuries did not require separate staging; in fact, distinctive staging would have been counterproductive, de-emphasizing the liturgy that the trope was supposed to support and clarify. As plays gained a separate existence, however, their staging techniques evolved as well. The mystery plays of the later Middle Ages demanded more-complex staging. Although evidence from the fourteenth century is scattered, it appears that they were staged around a circular earthworks. Around this circle were scaffolds on which platforms were placed. The sets were quite typical—such as a palace, cottage, or hell’s mouth—and were reused year after year. The actors performed on the platforms or at the base of the scaffolding while the audience sat on the earthworks in the center of the scaffolds or in the empty places between the scaffolds. Stage effects could be quite stunning. Actors were lifted up and down by means of pulleys, and clouds that parted to reveal God were standard equipment. There are even records of payments to individuals who hid behind the mouth of hell and kept a fire burning there throughout the play.