Asian immigrants to the United States arrived from many different countries, at different times, and for different reasons. There is no single historical background for Asian Americans, but a wide range of histories.

In 2000, the U.S. Census reported a population of 11.9 million people of Asian descent, making up 4.2 percent of the total U.S. population. The number of Asian Americans had soared since 1960, when there were only 878,000 people of Asian descent in the nation. The national backgrounds had changed significantly as well. In 1960, 99 percent of Asian Americans came from three national backgrounds: 52 percent were Japanese, 27 percent were Chinese, and 20 percent were Filipino. In 2000, Chinese and Filipino Americans were the largest groups, followed by Asian Indians, Koreans, and Vietnamese. Japanese Americans were the sixth-largest group.

The Chinese were the first Asian immigrants to come to the United States in significant numbers. A few Chinese seamen and merchants had arrived on the East Coast of the United States by the end of the eighteenth century, but it was not until the discovery of gold, or California Gold Rush , Page 98  |  Top of Articlein 1848 that large numbers began the long journey to the Americas. The 1850 census counted only about 750 Chinese in California , but by 1852 more than 10,000 aspiring Chinese gold miners had passed through the Customs House in San Francisco.

Spurred on by a harsh economy at home, an estimated 322,000 Chinese people, mostly men, entered the United States between 1850 and 1882. A majority came from the rural provinces of Kwangtung and Fukien and spoke Cantonese. Although some paid their own way, most were very poor and financed their passage by the “credit-ticket” system; that is, they borrowed money from Chinese middlemen, which they were to repay with interest out of their earnings in America.

The Chinese workers formed urban clusters within larger cities. These clusters were called Chinatowns, and they operated independently of the larger cities around them. The Chinese found strength in numbers, and they relied upon each other to create a cultural identity that would protect them against the harsh attitudes of Americans.

The Chinese not only lived in Chinatowns, they also shopped and socialized there. The culture of Chinatowns was much like that of the homes the immigrants had left behind. Although these cities-within-cities were originally overcrowded slums full of crime and violence, many turned into tourist attractions by the mid-1900s.

Chinese immigrants were treated badly in the United States. They were subject to discrimination, often violent. They could not become American citizens, for a 1790 law reserved citizenship for white persons. Even so, Chinese immigrants journeyed throughout the West, seeking gold or job opportunities in Nevada , Oregon , Idaho , Colorado , and South Dakota .

Thousands of non-Chinese travelled from the eastern United States in search of instant wealth from gold. But most miners were disappointed; they did not find gold simply lying around in streams and gulches. Mining was hard work, and many men gave up after weeks or months of finding nothing. Disappointment led to resentment, as Americans considered their Chinese peers competition for the gold. Soon the Chinese were accused of stealing the Americans’ wealth.

One other aspect of the Chinese workers frustrated Americans: They would not fight back. They were a peaceful group of immigrants and accepted their fate in America. Whereas other groups might respond with violence, the Chinese instead drew strength from each other. Having developed Page 99  |  Top of ArticleChinatowns as their home base, they lived largely separate from the larger cities around them. By limiting their interactions with non-Chinese, they did not often confront racial hatred face-to-face.

After the Gold Rush, thousands of Chinese went to work in the railroad industry . Construction of the Central Pacific—the western half of the transcontinental railroad—was accomplished largely because of the skill, dedication, and hard work of some twelve thousand Chinese workers. But most Chinese were publicly denied any credit for their years of labor. A famous photo taken at Promontory Point, Utah , records the celebration over the last spike being driven into the Transcontinental Railroad in 1869. That golden spike connected the east and west by railway. Not one Chinese worker appears in the photo.

After the railroad work was completed, in California in particular, Chinese labor became an important part of the economy. Chinese laborers converted the swamps of the San Joaquin and Sacramento deltas into rich farmland. Half of the labor force in San Francisco's four key industries—shoes, woolens, tobacco, and garments—was Chinese. Even with these contributions, the Chinese increasingly became the target of white resentment and racism.

The first restrictions on immigration

Succumbing to pressure from anti-Chinese groups, in 1882 Congress passed the Chinese Exclusion Act, the first major restriction on immigration to the United States. The act prohibited Chinese laborers from entering the United States; it also prohibited them from becoming U.S. citizens. Another act six years later banned the reentry into the United States of Chinese laborers who had gone back to China to visit. Thus, Chinese men could not visit their families or even go home to marry. These immigration restrictions permanently separated untold numbers of Chinese families who would never see one another again.

The Chinese Exclusion Act marked the beginning of an illegal immigration movement that involved an “underground railroad ,” much like the one used by African American slaves earlier in the century to flee north to non-slave states. People secretly worked together to smuggle Chinese citizens into the United States via Texas . The Chinese would be safely hidden and transported by various men and women on their journey to the United States. Once in Texas, these aliens attended a secret school that taught them enough English to help them find work. Page 100  |  Top of ArticleChinatowns became even more important to the immigrants, as they needed to find shelter and steady work.

In spite of the Chinese Exclusion Act, the illegal immigration movement caused the Chinese population in America to increase. It peaked in 1890 at around 107,488 people. The number decreased after that, mostly because the majority of Chinese immigrants were travellers who had never planned to stay. Using the Chinese underground railroad, they returned to their native land.

The Chinese were legally forbidden to immigrate to the United States until 1943, when China became America's ally (partner) in World War II (1939–45). At that time, the Chinese fell under regular immigration law. Most Chinese immigrants who entered the United States after the war were women, many of them the wives of Chinese men already in America.

Japan had been an isolated country until the 1860s, when it embarked on a program of industrialization and modernization. This program involved imposing heavy taxes on already impoverished peasants (land 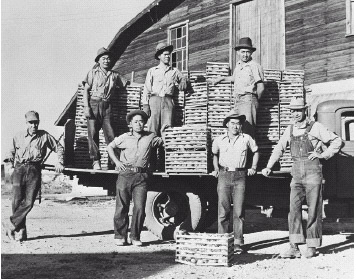 Japanese laborers were first recruited to work on sugar plantations in Hawaii and later also did agricultural work throughout California. © BETTMANN/CORBIS

workers), many of whom, encouraged by stories of the “land of money trees,” left Japan for America.

The Japanese government, unlike the Chinese, was able to regulate emigration. Wishing to avoid the problems of gambling, prostitution, and drunkenness that had beset the predominantly male Chinese immigration population, Japan actively promoted the emigration of women. From the end of the Civil War (1861–65) through the early twentieth century, the Japanese were the largest group of Asians to immigrate to the United States.

In 1903, the United States annexed (took control of) the Philippines, which had been a Spanish colony for four hundred years. The Filipinos were assigned unclear status as U.S. nationals—something between a foreigner and a citizen. As colonists, they were free to immigrate to the United States, and many arrived during the period from 1906 to 1934. Many came as laborers for farms and industry, and a significant number of Filipino students came to study at American universities on government-funded scholarships. These students were expected to return to the Philippines when they had finished their studies to provide the colony with their professional skills, but many stayed in the United States.

The Barred Zones Act of 1917 and the Immigration Act of 1924 effectively ended Asian immigration to the United States. The 1917 law barred immigration from most of Asia, while the 1924 legislation established immigration quotas (a proportional number) for each country; the quotas for most Asian countries were set at zero. For a time, Filipinos could enter the United States as U.S. nationals, but in 1935 Congress passed legislation that imposed a quota of fifty Filipino immigrants per year. Immigration from Asia virtually stopped.

It was not until 1965 that large numbers of Asians were able to immigrate to the United States. The Immigration and Nationality Act of 1965 abolished the national origins quotas and ended policies that discriminated against Asian nations. It provided 170,000 visas (documents allowing a person to legally enter the country) for people emigrating from countries in the Eastern Hemisphere, with no limit for any one country. The act gave special preference to family members of people already in the country.

The act dramatically changed U.S. immigration. From only 3 percent of the total of immigrants in 1960, Asians made up 34 percent of all immigrants to the United States in 1975. The nations of origin began to change as well. 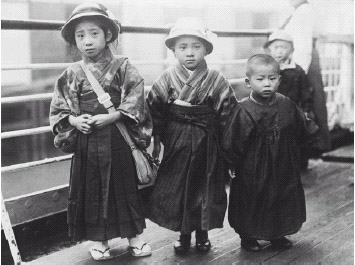 After the Immigration and Nationality Act of 1965 abolished stricter restrictions on immigration, many people were able to send for their families to join them in the United States. © BETTMANN/CORBIS

Chinese were the largest group of immigrants. In 2000, there were more than 2.4 million Chinese Americans, making up about 21 percent of Asian Americans, and recent Chinese immigrants made up the fourth-largest group of foreign-born U.S. residents. In 2002, the U.S. Census Bureau reported that the Chinese language ranks second (after Spanish) among foreign languages spoken in the United States. The Filipino American population soared as well, from 176,130 in 1960 to 1.8 million in 2000.

Immigration by Asian Indians rose from 300 in 1965 to 14,000 in 1975; in 2000 there were 1.9 million Asian Indian Americans. Asian Indians immigrated to the United States mainly because of widespread unemployment in their home country. They have settled throughout the nation. One of the country's fastest growing ethnic groups, they are also one of its wealthiest.

In little over a century, the Korean American population has grown from a small group of political exiles and immigrant laborers in Hawaii and California to become one of the fastest-growing ethnic groups in the United States. According to the 2000 U.S. Census, Americans identifying themselves as of Korean descent numbered 1,228,427.

There were less than four thousand Vietnamese Americans in 1970. The Vietnam War (1959–75), a war between the communist North Vietnamese and the anticommunist South Vietnamese, changed that dramatically. Despite U.S. participation on their side, the South Vietnamese were defeated in 1975. On the day the capital city of Saigon fell, at least sixty-five thousand South Vietnamese fled the country.

In 1975, neighboring Cambodia was taken over by the Khmer Rouge, a radical and brutal revolutionary group under the leadership of Page 104  |  Top of ArticlePol Pot (1926–1998). The Khmer Rouge aimed to turn Cambodia back into a farming country and began by forcing Cambodians to move from the cities to the country, where many starved. The government then began killing educated and professional Cambodians and anyone connected with Americans. The death toll ran into the millions. When Vietnam invaded Cambodia in 1979, hundreds of thousands of Cambodians took advantage of the situation to flee to Thailand. From there, tens of thousands eventually immigrated to the United States. In the 1990s, Cambodia's political situation improved, and emigration from the country slowed down. In 2000, there were an estimated three hundred thousand Cambodian Americans.

In 1975, communist forces took over Laos as well as Vietnam. Thousands of Laotians fled to the United States, entering the country as refugees. In 2000, there were 198,000 Laotian Americans.

Other groups of Asian descent, such as Thai, Hmong, Pakistani, and Taiwanese Americans, have also developed significant populations since the 1970s.