The American civil rights struggle is an ongoing fight for the personal rights, protections, and privileges granted all U.S. citizens by the Constitution and Bill of Rights . At the end of the American Civil War (1861–65), constitutional amendments were enacted to protect African Americans recently released from slavery . The Fourteenth Amendment (1868) declared that all former slaves were U.S. citizens and received equal protection under the laws of state and federal governments. The Fifteenth Amendment (1870) assured equal voting rights to all citizens, regardless of race. Until the 1950s, however, the civil rights of African Americans were systematically denied, particularly in the South where the majority of black Americans resided. A remarkable era of nonviolent Page 303  |  Top of ArticleAfrican American activism began in 1954, known today simply as the civil rights movement. It was launched by the Brown v. Board of Education decision in 1954, in which the Supreme Court ruled that segregation in the public schools was illegal. This phase of the civil rights struggle ended with the passage in 1965 of the Voting Rights Act , which—nearly a century after the Fifteenth Amendment had already done so—once again assured voting rights to all citizens.

Background of the movement

After the Reconstruction Era (1865–77), a period after the Civil War in which the federal government controlled the southern states that had seceded (withdrawn) from the Union, whites in the South enacted the Jim Crow laws . These were a series of laws throughout the South that required segregation, the separation of the races in public places. White southern state legislatures limited African American rights to own land, to enter certain occupations, and to gain access to the courts. By 1900, southern whites had accomplished the disfranchisement (exclusion from voting) of most southern blacks.

In the early twentieth century, because it was too dangerous to effectively resist racial injustice in the South, most civil rights struggles were carried out in the North. In 1905, black scholar and author W. E. B. Du Bois (1868–1963) and other black leaders began the Niagara movement, named after their meeting place near the Niagara River bordering the United States and Canada, to fight racial injustice. Their organization eventually became the National Association for the Advancement of Colored People (NAACP) , which fought for racial equality mainly through the courts and the press. Until World War II (1939–45), the NAACP's progress was slow.

After the war, a new sense of urgency prevailed in American black communities. Soldiers who had risked their lives to fight for the country expected equal treatment when they returned home. More than one million African Americans migrated from the rural South to northern cities in the first decades of the century. Over two million blacks had registered to vote by the late 1940s. In December 1948, President Harry S. Truman (1884–1972; served 1945–53) ran for his second term as president on a strong civil rights plank. Although some southern whites quickly abandoned him, he received 70 percent of the northern black 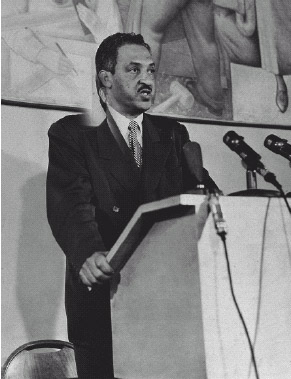 vote and won the election. Two years later, he began to desegregate the armed forces.

The aftermath of Brown

Brown‘s most immediate effect was to intensify the resistance of white southerners to civil rights progress. The Ku Klux Klan , a secret society of white southerners in the United States that uses terrorist tactics to suppress African Americans and other minorities, stepped up its violent intimidation of African Americans. Southern congressmen and governors vowed to resist desegregation. In 1957, when nine black students attempted to attend classes at a formerly all-white school in Little Rock, Arkansas, federal troops were required to protect them from the furious white mobs. (See Little Rock Central High School Desegregation .)

Even so, Brown provided the spark that ignited a movement. African Americans across the country recognized that the highest court had upheld their rights; leaders began to prepare bolder assaults on segregation in the South. One common form of protest is a boycott, an organized refusal to do business with someone. In December 1955, blacks in Montgomery, Alabama , organized a bus boycott after the former NAACP secretary of the Montgomery branch, Rosa Parks (1913–2005), was arrested for refusing to yield her seat to a white man. (See Montgomery Bus Boycott .) The boycott leader was Martin Luther King Jr. (1929–1968). Only twenty-six years old, the minister from Atlanta was an inspiring speaker who invoked Christian morality, American ideals of liberty, and the ethic of nonviolent resistance in his campaign against racial injustice. In November 1956, despite growing Page 305  |  Top of Articlewhite violence, the bus boycott triumphed when a Supreme Court decision overturned Montgomery's laws enforcing bus segregation.

In 1957, Congress passed the first Civil Rights Act since the Reconstruction Era. African Americans, however, had seen that court decisions and federal acts had consistently failed to make changes, so during the late 1950s they moved their struggle for equality to the streets. In January 1957, King organized the Southern Christian Leadership Conference (SCLC) , a network of nonviolent civil rights activists drawn mainly from African American churches.

In 1960, four African American students began the sit-in movement , when they sat at the lunch counter at a Woolworth's store in Greensboro, North Carolina , which served only whites. The store closed down the lunch counter. Later that year, several hundred student activists gathered in Raleigh, North Carolina, to form the Student Nonviolent Coordinating Committee (SNCC, pronounced “snick”) to promote nonviolent resistance to Jim Crow laws. By the summer of 1960, the sit-ins had desegregated dozens of lunch counters and other public accommodations, mainly in southern border states. Guided by King and other nonviolent activist leaders, protesters courageously endured insults, intimidation, violence, and arrest without striking back. 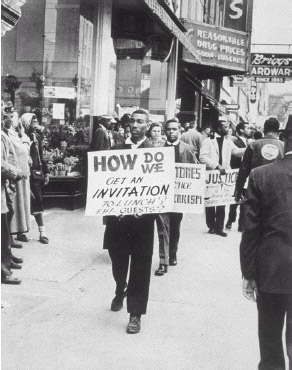 In 1962, Kennedy again was forced into action. He sent federal marshals to protect a black student named James Meredith (1933–), who had registered at the all-white University of Mississippi at Oxford. After mobs killed two people at the campus and besieged the marshals, the president reluctantly called in more troops to restore order.

In 1963, demonstrations throughout the South led to fifteen thousand arrests and widespread white violence. On May 3 and for several days afterward, police in Birmingham beat and unleashed attack dogs on nonviolent followers of King, in full view of television news cameras. The resulting public revulsion over the Birmingham protests spurred Kennedy to urge Congress to enact a strong civil rights law.

A coalition of African American groups and their white allies sponsored a march on Washington, D.C., on August 28, 1963, to advance the civil rights bill then before Congress. Standing before the Lincoln Memorial , King delivered his famous plea for interracial brotherhood in his “I Have a Dream” speech, enthralling several hundred thousand blacks and whites.

Voting rights in the South

In 1964, SNCC initiated Freedom Summer , a massive black voter registration and education campaign aimed at challenging white supremacy in the deep South, starting in Mississippi . About one thousand college students, most of them white, volunteered. The freedom workers were not well received by a segment of Mississippi's white population. Three 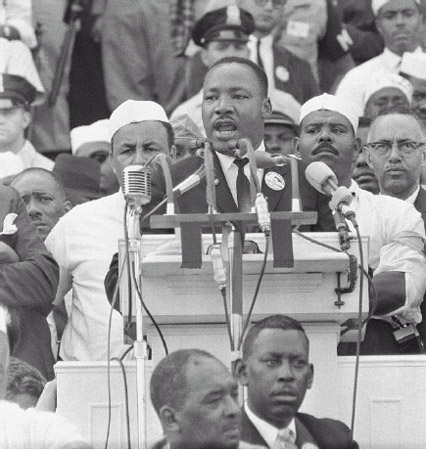 Dr. Martin Luther King Jr. delivers his famous “I Have a Dream” speech at the Lincoln Memorial in Washington, D.C., on August 28, 1963. AP IMAGES

volunteers were murdered by a mob led by the deputy sheriff of a Mississippi town. Nevertheless, the project continued.

After the Selma-Montgomery march , Johnson signed a strong Voting Rights Act, which authorized the attorney general to send federal voting examiners to make sure that African Americans were free to register. The examiners were granted the power to enforce national law over local regulations wherever discrimination occurred.

After 1965, the civil rights movement began to fragment, primarily over the nonviolent tactics of King and his supporters and the goal of integration into the dominant society. Malcolm X (1925–1965), a leader of the religious and sociopolitical group the Nation of Islam , questioned the value of integration into a society that had exploited and abused African Americans for centuries. He did not believe that the sit-ins, marches, or other tactics of civil rights activists were effective tools with which to gain rights, especially when confronted with violent resistance in the South. In 1966, SNCC leader Stokely Carmichael (also known as Kwame Ture; 1941–1998) ridiculed nonviolent efforts and demanded “black power,” a militant slogan that alienated white liberals and divided blacks. The focus of the Black Power Movement began to shift to economic injustices in the North. Violent ghetto riots began to break out in large cities like Detroit and Los Angeles. On April 4, 1968, the assassination of Martin Luther King Jr. touched off riots that left Washington, D.C. , in flames for three days. The movement would continue, but this initial remarkable phase of the nonviolent civil rights struggle was over.

The central goal of the African American civil rights movement—full equality between blacks and whites—remains a distant vision. Neighborhoods, private schools, and jobs remain segregated along racial lines; African American incomes remain significantly lower than those of whites; and job and educational opportunities are not distributed equally. Nonetheless, the civil rights movement of 1954–65 transformed American race relations. In communities throughout the South, “whites only” signs that had stood for generations vanished from hotels, restrooms, theaters, and other facilities. By the mid-1970s, school desegregation had become fact as well as law in more than 80 percent of all southern public schools (a better record than in the North, where residential segregation remains pronounced). The protection of the right to vote represents the civil rights movement's greatest success: When Congress passed the Voting Rights Act in 1965, barely 100 African Americans held elective office in the country; by 2000 there were more than 9,000.