Christopher Columbus was an Italian explorer who sailed in the service of the king and queen of Spain. Between 1492 and 1504, he made four voyages to the Caribbean and South America, lands unknown to Europeans at that time.

Goes to sea as a teenager

Columbus was born some time in the fall of 1451 to a humble family in Genoa, Italy. He became a seaman at a young age. By the time he was in his twenties, he was a skilled sailor with enough knowledge to pilot his own boat. In 1476, Columbus traveled to Lisbon, Portugal, where his younger brother, Bartholomew Columbus (c. 1461–1515), operated a book and map store. Columbus educated himself in the store, studying navigation and the art of cartography, or mapmaking. A devout Catholic, Columbus also studied religion.

Enterprise of the Indies

During the 1470s and early 1480s, Columbus participated in several long voyages that took him as far as Iceland and Africa. Trade with Asia (then called the Indies) was very profitable at the time, and he began to formulate the idea that it would be faster and easier to travel to Asia by 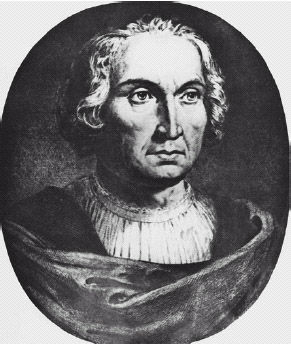 Italian explorer Christopher Columbus sailed on behalf of the king and queen of Spain, hoping to spread Christianity around the world. THE LIBRARY OF CONGRESS

sailing westward from Europe, going across the Atlantic Ocean, than by traveling east, as was commonly done. Contrary to legend, all educated fifteenth-century Europeans knew that the earth was round, but no one had any idea about its size; most theories underestimated the size of the earth by about one-third. Most people also believed the earth was one huge landmass, consisting of Europe, Africa, and Asia, surrounded by water. It was not surprising that Columbus guessed incorrectly at the distances between continents.

Naming his plan to reach Asia on a westward route “The Enterprise of the Indies,” Columbus tried unsuccessfully to persuade Portuguese king John II (1455–1495) to support an expedition proving his theory. In May 1486, Spanish queen Isabella I (1451–1504) agreed to hear his plan.

Besides finding a new trade route and untold riches, part of Columbus's goal in his enterprise was to bring Christianity to the world's peoples. This appealed to Queen Isabella, who wished to create a vast, worldwide, Spanish empire that would spread the Christian religion to every corner of the earth.

In April 1492, Queen Isabella and her husband, King Ferdinand II (1452–1516), signed an agreement with Columbus to fund his voyage. Columbus secured three ships—the Niña, the Pinta, and the Santa Maria—and a crew of about ninety men and boys. The Santa Maria, at 100 feet in length, was the largest of the three ships.

The fleet sailed on August 3, 1492. By chance, Columbus found the best possible Atlantic route to the New World and the weather was good. Still, the voyage took weeks. Finally, on October 11, signs of land became apparent—branches with green leaves and flowers floating in the water. Very early on the morning of October 12, the lookout on the Pinta saw land.

The grateful crew landed on a small island in the present-day Bahamas. Columbus named the island San Salvador (Holy Savior). Columbus stayed on the island for two days, meeting with its inhabitants, members of the peaceful Arawak-speaking Taino tribe. Not knowing where he was, and always assuming that he had reached the Indies, he called these people Indians.

Columbus spent several days exploring the Bahamas, but the Taino told him about another much larger island named Colba (Cuba), and he set off for it, thinking it must be part of China or Japan. He landed on Cuba on October 28, 1492, and for the next month sailed along its north coast. After leaving Cuba on December 5, 1492, Columbus sailed 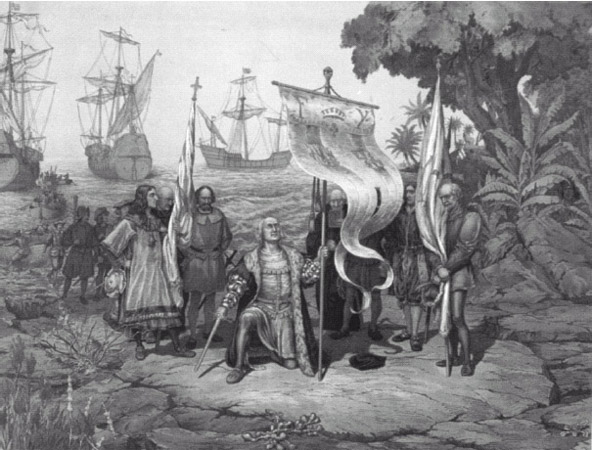 Christopher Columbus landed on the island he named San Salvador in 1492, thinking that he was somewhere in the Indies when he was actually in an area of the present-day Bahamas. THE LIBRARY OF CONGRESS

to another large island, which he named Hispaniola because it reminded him of Spain.

In Hispaniola, Columbus met a young Arawak chief who was wearing gold ornaments, which he was willing to trade for European goods. Farther east, Columbus met a more important chief who had even larger pieces of gold. Columbus entertained him and his people on board the Santa Maria on Christmas Eve. After the festivities, while everyone was asleep, the ship hit a coral reef and began to sink. Helped by the chief and his followers, the Spanish were able to unload most of the ship's goods and carry them to shore. Making the best of a bad situation, Columbus founded the first European settlement in the Americas. He named it La Navidad (The Nativity) after the birthday of Christ.

In January, Columbus sailed for Spain, leaving twenty-one men behind in La Navidad. He returned with spices, slaves, and a small amount of gold. He had written a pamphlet praising the lands he had found. They were, he exclaimed, filled with amiable natives and vast riches. Columbus stayed in Barcelona for three months. For having discovered a new route to the Indies, Queen Isabella and King Ferdinand gave him titles and honors and agreed to sponsor a second voyage.

Columbus's second expedition to the Americas in 1493 was much larger than the first, with seventeen ships and about twelve hundred to fifteen hundred men aboard. After a smooth crossing, the ships sailed through the Caribbean islands. There they encountered the native Caribs, a warlike people who were skilled navigators and made raids upon others from their large dugout canoes. After a brief fight, some of the Caribs were captured and sent to Spain as slaves.

When the Spanish fleet reached the settlement at La Navidad, they found it in ruins with the unburied bodies of Spaniards everywhere. Many historians assume that the once-peaceful Arawak Indians rebelled against Spanish abuses and killed the Spaniards. Abandoning the site, Columbus took his new colonists seventy-five miles to the east where he Page 363  |  Top of Articlebuilt a trading fort called Isabela in what is now the Dominican Republic. It turned out to be a poor location, but Columbus laid out a main square with a church and “royal palace” and constructed 200 huts for the settlers. Within four days, the settlers found gold near Isabela. Columbus then sent twelve ships laden with gold and spices back to Spain.

In 1494, Columbus's brother Bartholomew arrived from Spain. The Arawak, who were traditionally a peaceful people, had by that time realized that the arrival of the Spanish meant their destruction. Columbus and his men took the Arawaks as slaves; his men also sexually assaulted the Arawak women. In addition, the Europeans brought with them epidemic diseases that were deadly to the natives. So the Arawak put together a large force to try to drive the intruders off the island. At the end of March 1495, Columbus and his brother led a force that defeated the Native Americans and enslaved many of the survivors.

Despite Columbus's personal promise to Queen Isabella not to use unnecessary violence with the natives, many of Columbus's men were abusive to the Native Americans. Columbus, unsuccessful in imposing order, decided to return to Spain in 1496. He left his brother in charge of the colony, but Bartholomew quickly abandoned Isabela and moved the Spanish headquarters to the south side of the island at Santo Domingo.

News had already reached Spain of the trouble in Isabela. It took Columbus two years to convince Ferdinand and Isabella to send him out on a third voyage. The royals finally agreed. The small fleet did not actually leave until May 30, 1498, because Columbus had trouble finding ships and supplies.

Columbus landed on the island of Trinidad on August 1, 1498. The next day, he sailed to the mouth of the great Orinoco River in Venezuela, realizing almost at once he had reached a continental landmass. This was his first view of the mainland of the Americas.

When he returned to Hispaniola, Columbus found trouble. Isabella and Ferdinand had sent a new governor to replace Columbus in Page 364  |  Top of ArticleHispaniola. When the new governor arrived, finding the Spanish inhabitants in a state of rebellion, he immediately arrested both Columbus brothers. He put them in chains and sent them back to Spain, where they arrived in October 1500. Columbus stayed in chains for five weeks after his return until he was released by Ferdinand and Isabella on December 12.

Columbus was granted one more expedition in 1502. He arrived in Santo Domingo in the middle of a hurricane, but its new governor would not let him enter the harbor. Columbus sailed across the Caribbean to the coast of Honduras and journeyed southward along the coast of Central America looking for a passageway west. When he reached Panama, he was close to the Pacific Ocean. It is possible that Columbus may then have realized the continent he had found was not Asia, but there are no records to prove this.

Columbus tried to found a new colony in western Panama. As one of the rainiest places in the world and inhabited by Native Americans hostile to the Europeans, it proved unsuitable for settlement. After great delays due to leaky ships, Columbus chartered a boat and left for Spain in September 1504.

Columbus's biggest supporter, Queen Isabella, died in 1504. Ill himself, the disgraced navigator continued to try to convince King Ferdinand to sponsor another voyage, but he failed. Columbus moved into a house in the Spanish city of Valladolid in 1506 and died there on May 20.