The Industrial Revolution began in England in the early eighteenth century, and developed later in the United States, around the time of the American Revolution (1775–83). Over a period of about one hundred years, machines in the United States gradually replaced unaided human hands in accomplishing the nation's work. With the use of labor-saving machines, the nation was able to produce goods on a large scale, build factories and plants, transport large quantities of raw and manufactured goods, farm on a much grander scale, and establish corporations and management systems to accommodate large-scale production. Industry transformed the United States from a rural farming society into the wealthiest and most powerful nation in the world.

During the seventeenth century, England had a dramatic increase in population. Its farming economy could not support the large numbers of people, and the poor were forced to move to the cities to seek work. The cities desperately needed larger food supplies to feed their growing 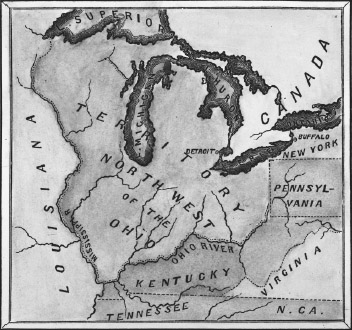 A map of the Northwest Territory, composed of the modern-day states of Michigan, Ohio, Indiana, Illinois, and Wisconsin, produced a large portion of the nation's crops. During the Industrial Revolution, new ways to transport these goods were developed and became vital to the industry. THE GRANGER COLLECTION, LTD.

populations. The answer to the problem appeared in the form of new designs for farm machinery that could do large amounts of work with fewer laborers.

Machinery was also providing jobs in the cities and towns of England, where many former farm laborers found work in the textile (cloth-making) industry. In earlier times, cloth had been spun and woven in people's homes, but in 1730 new machines were invented that sped up the pace of spinning thread and weaving material. Around 1771, English inventor Richard Arkwright (1732–1792) built a waterwheel-operated mill to power his spinning frame, and this was considered the world's first factory. (A factory is a building or group of buildings in which many people work to manufacture goods, generally with laborsaving machines powered by a central source.)

The steam engine was the vital new power source of the Industrial Revolution. A steam engine burns wood or other fuel to heat water into steam, which in turn becomes the power that turns the parts of the engine. Page 765  |  Top of ArticleEarly steam engines were designed to pump water from the English mines in the seventeenth century. In 1765, Scottish engineer James Watt (1736–1819) improved the designs. Watt's new steam engine could be used to power mills, so factories no longer needed to be near a source of moving water to power a waterwheel. By the last decade of the eighteenth century, steam engine–powered factories were being built throughout England. Using steam engines, iron and steel production became a thriving new industry.

In 1789, British textile mill supervisor Samuel Slater (1768–1835) secretly memorized the details of the Arkwright spinning factory and emigrated to the United States. Once there, he designed and built the machinery for a cotton mill in Rhode Island . The mill went into operation in 1793. By 1828, Slater owned three factory compounds in Massachusetts . 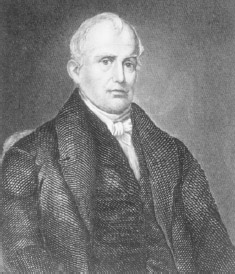 British textile worker Samuel Slater designed and built the machinery for a cotton mill in Rhode Island based on designs he saw in England. THE LIBRARY OF CONGRESS

In 1810, Boston businessman Francis Cabot Lowell (1775–1817) visited England's textile mills. After returning home, he enlisted the aid of a skilled mechanic and created a water-powered textile mill. At Lowell Mills , for the first time in the United States, raw bales of cotton could be turned into bolts of cloth under one roof. Lowell's company went on to build a complete factory town in Lowell, Massachusetts. The new, mechanized textile industry prospered and grew, employing thousands of workers, mainly in the Northeast.

In the first years of the new nation, the majority of Americans lived within one hundred miles of the East Coast, but as the nineteenth century began, people began to migrate west. Farmers in the West needed manufactured goods from the East, and easterners needed the crops from the West and South. There were few roads, and it was expensive and time-consuming to transport goods. Building transportation systems in such a Page 766  |  Top of Articlehuge territory was a daunting project, but over the next fifty years, roads, canals, steamboats, and railroads spread throughout the nation.

In 1817, Congress authorized the construction of the National Road, also called the Cumberland Road, from western Maryland to the Ohio River at Wheeling, Virginia . It was the first road to run across the Appalachian Mountains and into the territory known as the Old Northwest, which was composed of the modern-day states of Ohio , Indiana , Illinois , Michigan , and Wisconsin . The Old Northwest Territory produced a large portion of the country's crops. The National Road was the largest single road-building project to occur before the twentieth century.

Most of the country relied not on roads, but on the nation's rivers to transport goods. In the first half of the nineteenth century, most of the produce grown in the Old Northwest Territory was carried to market by man-powered boats on the Ohio and Mississippi Rivers. In the 1830s, steamboats (boats powered by steam engines) crowded the inland waterways of the United States. They expanded trade to towns and cities located along the major waterways. Steamboat construction became a thriving industry.

Still, many of the best farming districts in the Old Northwest had no river access. Canals, man-made waterways built for inland transportation, seemed to provide a solution. In 1817, the state of New York approved the funding of the Erie Canal , a 363-mile canal linking Albany on the Hudson River with Buffalo, New York, on Lake Erie. Upon its completion in 1825, the Erie Canal was already carrying monumental traffic. It proved an inexpensive route for shipping goods from the West, such as lumber and grain, to the New York ports, and for bringing manufactured goods from the Northeast to the West. New towns and industries were quickly established along the canal and on the Great Lakes. Many states rushed to build their own canals, but railroads soon emerged to compete in the long-distance transportation business.

Steam locomotives had already developed in England when a group of businessmen in Baltimore, Maryland, decided to launch the first U.S. railway, the Baltimore and Ohio (B & O) in 1826. By the early 1850s, several railroads had established lines that allowed them to transport freight between the Great Lakes region and the East Coast, and new railroad construction projects developed across the eastern United States. The explosive growth of the railroad industry in the eastern states, coupled Page 767  |  Top of Articlewith the potential wealth in the country's western territories, convinced growing numbers of people that a railroad stretching from coast to coast should be built. The effort was hampered by the American Civil War (1861–65), but on May 10, 1869, the rail lines of the Central Pacific and the Union Pacific were finally joined in Utah , completing the transcontinental railroad.

In the beginning of the nineteenth century, the vast majority of Americans were farmers. For the nation to become industrialized, it was essential that most farmers run commercial farms—farms that produced large crops to be sold—rather than subsistence farms, which provided food only for the use of the farmer and his family. The nation's crops, particularly wheat and cotton , were needed to feed the working people in the cities and to provide the factories with materials for manufactured goods. There was enough farmland to meet the demand for these crops in the United States, but there were not enough laborers until mechanized farming was introduced.

Eli Whitney (1765–1825) brought mechanized farming to the United States with his cotton gin . The simple machine cleaned cottonseeds from cotton fibers fifty times faster than a worker could do it by hand. Soon, southern plantations and farms were supplying huge amounts of cotton to the new textile mills in the Northeast and to Europe. Other mechanized farm tools followed, such as the McCormick reaper and the steel plow.

The efficient new tools actually damaged the financial situations of many farming families in the 1880s and 1890s. Record crop yields resulted in lower prices while production costs increased, a combination that threw many farmers into debt. Farmers' alliances arose, calling for reform.

The United States's tremendous industrial and financial growth in the last decades of the nineteenth century was due in large part to the entrepreneurial boldness and business instincts of a number of industrial and financial tycoons who came to be known as robber barons . J. P. Morgan (1837–1913), John D. Rockefeller (1839–1937), Cornelius Vanderbilt (1794–1877), Andrew Carnegie (1835–1919), James J. Hill Page 768  |  Top of Article(1838–1916), Jay Gould (1836–1892), and others guided their business interests to levels of profitability that had never been seen before.

The monopolies (exclusive controls over the production of a particular good or service) of the robber barons enabled them to eliminate less powerful competitors, raise prices, and subsequently realize huge profits that were pumped back into their businesses. In 1890, the Sherman Antitrust Act was enacted in an effort to curb the power of the robber barons. But these men and their huge companies continued to dominate the U.S. economy.

Life in the city

The rural farm culture of the United States gave way to urban industrial culture as manufacturing plants multiplied and cities mushroomed in size. The nation's urban population rose 400 percent between 1870 and 1910, creating an urbanization of America . Large numbers of farmers moved to the city after the agricultural depression of the 1870s and 1880s. Joining them were an increasing number of immigrants from eastern and southern Europe. All were seeking work.

Cities of the late nineteenth century generally grew without planning. Living conditions were often deplorable, with thousands of families forced to reside in slums that were breeding grounds for infectious diseases. Crime was rampant: In 1881, the homicide rate in the United States was 25 per million; in 1898, the rate had risen to 107 per million. Child labor was common as well; in 1900, as many as three million U.S. children were forced to work full-time to help support their families. Poverty was hard to escape for urban laborers. Layoffs were common; as much as 30 percent of the urban work force was out of work for some period of each year.

By the 1880s and 1890s, the gulf between social classes had dramatically widened. In cities such as New York and Chicago, the fabulously wealthy built huge, elaborate mansions that overlooked desperately poor slums. The term “Gilded Age ,” coined by writer Samuel Clemens (1835–1910), came into common usage to describe the corruption and the false glitter of the era's wealthy. Reform efforts at the end of the century began a slow process to relieve the worst aspects of the division between the laboring classes and the social elite.