The Ku Klux Klan (KKK) is an organization that formed in the South after the American Civil War (1861–65). Its members believe strongly in the superiority of whites over other races. They work to ensure that the freedom of blacks do not threaten the social advantages of whites. The original organization disintegrated in the 1870s, but it was revived in its current form in 1915.

The original KKK was formed in 1865 in Pulaski, Tennessee . Six young Confederate soldiers organized what they called a social club. They 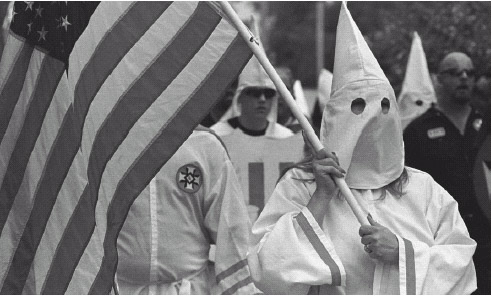 The Ku Klux Klan is an organization that formed in the South after the American Civil War. Its members believe strongly in the superiority of whites over other races. AP IMAGES

adopted disguises, secret signs, and rituals similar to those used by other fraternal organizations. The name “Ku Klux Klan” derives from the Greek word kyklos, meaning circle, and the English word clan, meaning family. Within months, the Klan's activities focused on spreading terror among newly freed slaves and their supporters.

The KKK organized under a hierarchy of leaders and quickly gained members throughout the South. It served as an underground resistance to the Republican federal government in Washington, D.C. , which had taken control of the southern states following the American Civil War. By giving slaves their freedom and taking steps to give them equal rights, the federal government shook the social order that had existed in the South. Worried that the governments’ policies would threaten the social and economic advantages that whites enjoyed, the KKK resorted to intimidation through terror to advance its cause. Attacking anyone, black or white, who supported the rights of blacks, members of the KKK Page 884  |  Top of Articlewhipped, robbed, raped, and murdered their victims. Klan violence peaked around 1870.

Several factors contributed to the KKK's dissolution within the next few years. In 1869, the head of the KKK, Imperial Wizard Nathan Bedford Forrest (1821–1877), ordered its groups to disband in response to public pressure and excessive violence. Congressional attention led to investigations of the group and the passage of four anti-Klan laws in 1870 and 1871. The laws enabled the U.S. government to bring numerous Klansmen to justice. Finally, by the 1870s, the KKK's goal of maintaining white social supremacy throughout the South had been met. Black Codes (state and local laws restricting blacks’ civil rights) and then Jim Crow laws provided legal means to hinder black equality. The Ku Klux Klan was no longer necessary for suppressing the rights of black Americans.

The spirit and name of the Ku Klux Klan was revived in 1915 by William Joseph Simmons (1880–1945). America's experience during World War I (1914–18) fed public fears and intolerance. As a result, the new Klan, revived as a Protestant fraternal organization, widened its focus of persecution. It opposed not only blacks, but also Catholics, Jews, immigrants, supporters of the political Left (liberals), and proponents of unionization.

The new KKK grew rapidly, peaking at more than four million members in the 1920s. Many of its members won election to public office. The Klan's acts of violence raised public anger, and by the 1940s Klan membership dwindled and nearly died out. The civil rights movement of the 1950s and 1960s, however, revived membership in the Klan. Although it has survived into the twenty-first century, its membership has fallen to a few thousand and its groups have become increasingly divided.