In September 1957, nine black teenagers broke the color line (the separation of black and white students) at a public high school in Little Rock, Arkansas . The youths had voluntarily transferred to the formerly all-white Central High School. Their transfer was part of a city plan to comply with a 1955 Supreme Court ruling that school boards desegregate (stop separating the races) as quickly as possible. (See Desegregation of Public Schools .) 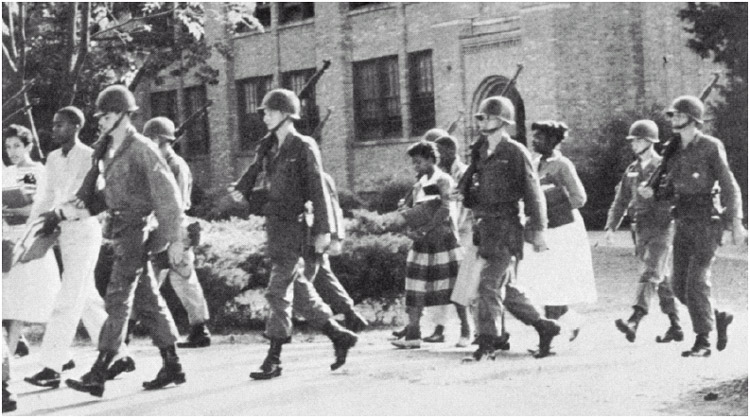 Federal troops escorting four black students to Little Rock Central High School to protect them from other students and protestors and ensure their entry into the school. AP IMAGES

These nine brave teenagers, who knew they would have to face an angry white crowd to get to their new school, were soon called the Little Rock Nine. The region's segregationists—people who aimed to keep the races separate in schools and other public places—led by Arkansas governor Orval E. Faubus (1910–1994), were preparing to stop them at any cost.

Governor Faubus had tried to get a federal court to delay school integration. He argued that the delay would avoid racial violence, but the courts did not support him. Faubus then ordered the Arkansas National Guard to bar black students from Central High. On September 4, 1957, the president of the state branch of the National Association for the Advancement of Colored People (NAACP), Daisy Bates (1914–1999), led eight black students to the school, but they were turned away by guardsmen at bayonet point (a bayonet is a pointed blade fixed to the end of a rifle). The ninth student, fifteen-year-old Elizabeth Eckford Page 920  |  Top of Article(1941–), walked alone; a white mob jeered, cursed, and threatened her as she narrowly escaped injury. Ten days later, President Dwight D. Eisenhower (1890–1969; served 1953–61) invited Faubus to be his guest at his summer home in Rhode Island and urged the governor to stop disobeying court orders. A federal judge ordered the withdrawal of Arkansas guardsmen from Central High. Faubus, however, remained defiant.

On September 23, the Little Rock Nine were escorted into Central High by the local police. A mob of several thousand white segregationists had gathered at the school to stop the children from entering. In a frightening scene, the police were forced to evacuate their charges from the school to protect them from the violence. The mob situation was so threatening the next day that the Little Rock mayor Woodrow Mann (1916–2002) sent President Eisenhower an urgent request for federal troops. Eisenhower did not support desegregation himself, but he reluctantly federalized the Arkansas National Guard (put them under the management of the federal, rather than the state, government) and dispatched U.S. Army troops to protect the students. The following morning, more than one thousand soldiers from the 101st Airborne Division accompanied the Little Rock Nine into Central High.

Army troops stayed in Little Rock for more than two months to keep mob violence in check, and the National Guard units remained until the school year ended in May 1958. Even so, the Little Rock Nine suffered constant harassment by angry segregationists inside and outside the school. One of the Little Rock Nine, Minnijean Brown (1941–), lost her temper after repeated verbal and physical provocations and was expelled in February 1958 for exchanging racial remarks with a white girl (who remained a student in good standing).

One year later, in September 1958, the Supreme Court ruled unanimously that school desegregation must proceed in Little Rock. Faubus responded by shutting down all of the city's public schools for the 1958–59 school year. The Little Rock Nine did not go to school that year. Only in August 1959, after the Supreme Court outlawed Faubus's scheme, did the public high schools reopen on an integrated basis.

The prolonged ordeal of the Little Rock Nine did not bring immediate gains for the civil rights movement . President Eisenhower never endorsed the Supreme Court's call for school desegregation. In an opinion poll taken in late 1958, Americans selected Governor Faubus as one of their ten most admired men. That fall, he won reelection by a landslide, and he remained virtually unbeatable in Arkansas politics for nearly ten years. Faubus was just one of many white southern politicians of that era who rose to national prominence because of their defiant opposition to school desegregation.

By 1960, only 6.4 percent of southern black schoolchildren (and 0.2 percent of those in the Deep South) attended classes with whites. Still, the Little Rock Nine received international acclaim for their courage in seeking racial justice. Ernest Green (1941–) was the first black student to graduate from Central High in May 1958. Whatever the personal cost, he knew when he received his diploma that he had achieved a major victory in the movement for civil rights.