Malcolm X was born Malcolm Little on May 19, 1925, in Omaha, Nebraska , one of eight children in his family. His father, Earl Little, was a Baptist preacher who was deeply influenced by the black nationalism (racial separatism) promoted by the leader of the Back to Africa movement of the 1920s, Marcus Garvey (1887–1940). 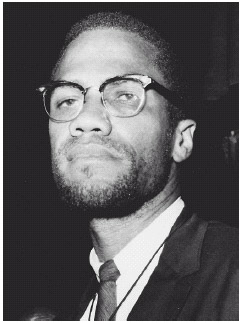 Malcolm X was instrumental in organizing mosques throughout the country and attracting young people to the Nation of Islam. AP IMAGES

During Malcolm X's early childhood, Earl Little's outspoken preaching and civil rights activism caught the attention of a white supremacist group (an organized group that believes white people should rule over those of other races). The Littles received several death threats and were forced to move several times, but they failed to escape from the white supremacists. Their house was burned down in 1929. In 1931, Earl Little was found dead on some streetcar tracks. Though the police called it an accident or suicide, his family knew it was the work of the white supremacists. In the difficult years that followed, Malcolm X's mother, Louise, had an emotional breakdown. She was committed to a mental hospital in 1939. Her children, including Malcolm, were sent to live in foster homes in western Michigan .

After living with several foster families, Malcolm X moved to Boston, Massachusetts , to live with his sister Ella. Although he had been an exceptional student through middle school, he dropped out of high school. He became a petty crook involved in gambling, prostitution, drug peddling, and theft. In 1946, he was arrested for robbery, for which he served six and a half years in prison.

While Malcolm X was in jail, he learned about the Nation of Islam, an African American religious and political movement based on the Muslim faith. The Nation of Islam advocated strict moral purity and self-help for its members. Like Garvey's followers in the 1920s, Black Muslims (members of the Nation of Islam) denounced whites, opposed integration (becoming a part of a mixed society), and called for black pride, independent black institutions, and ultimately a separate black nation. The Nation of Islam's leader at that time, Elijah Muhammad (1897–1975), advised Malcolm X through letters to give up his vices and educate himself. Malcolm X began an intense period of self-education, making good use of the prison library, and joined the Nation of Islam.

After his release from prison, Malcolm X rose swiftly in the Nation of Islam. He was instrumental in organizing mosques (Muslim places of worship) throughout the country and attracting young people to the organization. His skills as an organizer were surpassed only by his public speaking ability, which he had developed while in prison. In 1953, Malcolm discarded his surname, Little, because it had been handed down to his family from a slave master. He took on the “X” to stand for the African tribal name he would never know. A year later, Malcolm X was named minister of New York Mosque No. 7, which soon became the largest group of Muslims in the country.

Going against the tide

In the 1950s, Malcolm X did not directly participate in the civil rights movement that had recently been launched by the Supreme Court decision in Brown v. Board of Education (1954), which called for the desegregation of public schools (the elimination of the separation of the races). He did not agree with the civil rights movement's quest for desegregation. He believed that African Americans should remain separate from the white population because, in his view, American society was racist and always would be. He forced African Americans to seriously question the value of integration into a society that had exploited them, discriminated against them, deprived them of basic rights, and separated them from the mainstream.

In 1963, television news across the country showed police brutally mistreating nonviolent black civil rights demonstrators in Birmingham, Alabama (see Birmingham protests ). When the federal government failed to respond to the abuse immediately, Malcolm X severely criticized President John F. Kennedy (1917–63; served 1961–63) for his administration's inaction. He ridiculed the March on Washington for Jobs and Freedom later that year, characterizing it as a media event rather than a militant protest for civil rights. The racist violence against African Americans in the South, ranging from church bombings to the open assassination of civil rights activists, convinced him that the civil rights movement could not change deep-seated racial hatred and decades-long patterns of discrimination in America.

Beyond the Nation of Islam

By the early 1960s, Malcolm X had become a vital voice in the country. He appeared regularly in the media, usually surrounded by intimidating bodyguards, speaking with determined confidence, and jabbing his finger in the air to underscore his points. Many black Americans admired him and many whites feared him. Black and white civil rights leaders committed to nonviolence and integration publicly rejected his separatist message and his advocacy of armed self-defense.

By 1963, Malcolm X had become discontented with the Nation of Islam. He was convinced that Elijah Muhammad was not sincere, and it was clear to observers that Muhammad was jealous of Malcolm X's influence 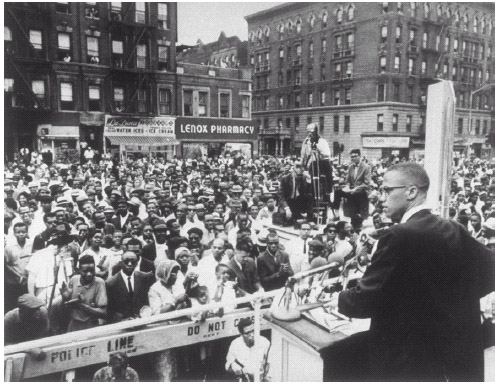 By the early 1960s, Malcolm X had become a vital voice in the country, appearing regularly in the media and speaking to groups around the country. AP IMAGES

in African American communities nationwide. In 1963, as the American public mourned the death of President Kennedy, Malcolm X publicly stated that the assassination amounted to “chickens coming home to roost” (meaning Kennedy's death was punishment for something he had done earlier in his life). Muhammad suspended him from the Nation of Islam.

During this suspension, Malcolm X traveled to Mecca (the holy city of Islam, in Saudi Arabia) and then throughout North Africa, where he discovered Orthodox Islam (the main, or traditional, teachings of Islam). His new embrace of Islam greatly changed his views. When he returned to the United States in 1964, Malcolm X rejected racism of all kinds, spoke of a common bond linking humanity, and conceded that some whites did want to end racism. He formally broke with the Nation of Islam and changed his name to El-Hajj Malik El-Shabazz. In June 1964, Malcolm X founded the Organization of Afro-American Unity (OAAU). His political leanings moved toward socialism, a social and economic system that strives for the equal distribution of wealth by getting rid of private property and abolishing ruling classes.

After leaving the Nation of Islam, Malcolm did not abandon all of his black nationalist convictions; he still talked of black-sponsored business ventures, black-run schools, and a cultural revitalization of African American communities. However, he did move closer to some of the more traditional civil rights leaders. By mid-1964, Malcolm X supported a number of nonviolent civil rights tactics, including rent strikes, boycotts, and cooperation with sympathetic whites. He incorporated some of the goals of Martin Luther King Jr. (1929–1968)—whom he met only once, in March 1964—into the OAAU.

On February 21, 1965, Malcolm X was giving a talk in the Audubon Ballroom in New York City when three members of the Nation of Islam shot and killed him.

Malcolm X once predicted that he would become more important in death than life. His influence was strong in the late 1960s after his death. His powerful image continued to shape the direction of the Page 950  |  Top of ArticleStudent Nonviolent Coordinating Committee (SNCC), the Black Power movement , and the Black Panther Party . The anger that Malcolm sought to channel into political action exploded in the 1965 Watts (Los Angeles) riot and the string of rebellions in Newark, New Jersey , and Detroit, Michigan, in 1967. By the 1990s, Malcolm X had become a folk hero to a large population of African Americans. Rap artists chanted his words; murals, hats, T-shirts, and posters displayed his piercing gaze; and his life was memorialized in a 1992 feature film.