In 2001 President George W. Bush (1946–; served 2001–) authorized limited federal funding of research on existing human embryonic stem cell lines. His act allowed funding only when the process of obtaining stem cells had been initiated prior to the bill, and the embryo from which the stem cell line was derived no longer had the possibility of 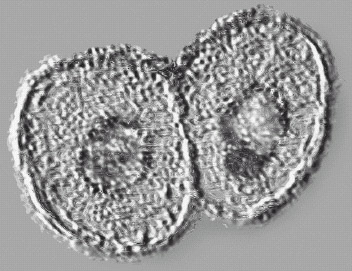 Human embryonic stem cells have the potential to develop into a variety of different cell types in the body. Stem cell research has boundless benefits to medicine and human health. PHOTO RESEARCHERS, INC.

development as a human being. This marked a partial reversal of his position in the 2000 presidential campaign, when, with the strong backing of pro-life (anti-abortion) groups, he opposed any use of stem cells obtained from human embryos. The 2001 act infuriated some religious and pro-life groups. On the other hand, Bush's bill so limited embryonic stem cell research that it raised equally strong opposition from advocates of stem cell research.

What is a stem cell?

Human stem cells are cells that are capable of developing into the different varieties of tissue present in the body of a fully formed human. There are three kinds of stem cells: embryonic, adult, and cord blood stem cells. An embryo is an unborn organism at the stage immediately after conception and before it develops into a fetus around the eighth week of pregnancy —embryonic stem cells are formed in the very early stages of the embryo. Adult stem cells can be taken from adult tissues. Cord blood stem cells can be found in the human umbilical cord, the cord that carries blood, oxygen and nutrients to the fetus from the placenta during pregnancy.

While adult and cord blood stem cells can only develop into a limited number of varieties of human tissue, embryonic stem cells are capable of developing into any one of the 210 or more varieties of tissue present in the body of a fully formed human. This is because a blood cell, for example, once formed, cannot become a brain cell, or vice versa; but at the embryonic stage, all cells are of a single type.

Stem cells have generally been obtained from surplus, or extra, embryos that were not used during in-vitro fertilization, a procedure that helps infertile women have babies. When a woman undergoes in-vitro fertilization, she is given medication that causes her to produce multiple eggs. The eggs are removed from the uterus and fertilized by sperm in a lab, creating embryos. In three to five days, the embryos reach what is called the blastocyst stage and are ready to be implanted in the woman's womb. Those that are not used are either frozen in liquid nitrogen or thrown away. Most of these surplus embryos will eventually be destroyed, but they are the basis of a huge national debate. If scientists could obtain the stem cells from them, they could almost certainly use them to save human lives and suffering. On the other hand, opponents point out that obtaining cells from any embryos destroys their potential for life.

Stem cell research has the potential to provide almost limitless benefits to medicine and human health. Among other things, the cells could make it possible to cultivate spare organs and other body parts; to produce human tissue for use in the treatment of diseases, such as cancer, that involve the degeneration of human cells; or for testing potentially dangerous drugs on human cells without actually testing them on human beings. There is reason to hope that in the not too distant future, stem cell research can provide cures for such diseases as Alzheimer's and Parkinson's diseases, juvenile diabetes, and even for spinal cord injuries. Enormous suffering would be eliminated with these cures. Beyond that, the knowledge scientists can derive from stem cells is expected to result in stunning health advances across the board.

The issue of stem cell research came to the fore during the administration of President Bill Clinton (1948–; served 1993–2001). At that time, the proposal under consideration permitted federal funding of embryonic stem cell research as long as the researcher had not been involved in actually obtaining the cells. By the time Bush limited research with his act of 2001, the National Institutes of Health (NIH) had established a registry listing the 78 human embryonic stem cell lines that were eligible for use in federally funded research, but only 22 cell lines were then available. Scientists were concerned about the quality and longevity of these 22 stem cell lines and hoped to be funded in their attempts to obtain new lines.

Attempts to continue the research

Embryonic stem cell research has had bipartisan (both political parties) backing from the start. This was especially evident in 2004 when former first lady Nancy Reagan (1921–) made a public plea to support stem cell research. Her husband, President Ronald Reagan (1911–2004; served 1981–89) was in the late stages of Alzheimer's disease, a degeneration of the brain functions that causes memory loss and eventually death, and Nancy Reagan wanted to waste no more time in finding a cure so that others would be spared his suffering. Since stem cell research is going on in other countries, many Americans fear a time will come when they will be excluded from cures that are available elsewhere. Polls have repeatedly shown that a majority of Americans approve of stem cell research.

Congress was not deaf to the pleas. On May 24, 2005, the House passed an act that would allow federal support of research that utilized embryonic stem cells regardless of the date they were taken from a human embryo. The act would have negated Bush's 2001 bill limiting research to the existing stem cell lines, but President Bush vetoed the bill in July 2006.

Several alternatives to obtaining stem cells from embryos were studied in the early 2000s, particularly therapeutic cloning (also termed “embryo cloning”). Cloning is the scientific process of obtaining a group of genetically identical cells from a single cell to create a genetic copy. In August 2003 a Chinese research team reported that it had made human embryonic stem cells by combining human skin cells with rabbit eggs. The researchers removed the rabbit eggs' DNA and injected human skin cells inside them. The eggs then grew to form embryos containing human genetic material. After several days the embryos were dissected to extract their stem cells. There is mounting evidence to suggest that stem cells from cloned embryos have even greater potential as medical treatments than stem cells harvested from unused embryos at fertility clinics.

Unfortunately, therapeutic cloning is sometimes categorized with human cloning, the creation of a genetically identical copy of an existing human. Because of this connection, therapeutic cloning of stem cells has also met with strong opposition. While nearly all lawmakers concur that Congress should ban reproductive cloning, many agree with scientists that stem cells derived from cloned human embryos have great medical value. They assert that the aim of allowing research is to relieve suffering. Like the issue of abortion, the debate is likely to continue for a long time.