In 1840, at the World Anti-Slavery Convention in London, Elizabeth Cady Stanton (1815–1902) met Lucretia Mott (1793–1880). Stanton and Mott were disturbed to find that there were no women speakers and that women who attended the convention were denied seats. Their meeting and sharing of ideas marked the beginning of a friendship that would have a great impact on women's rights in the United States.

In 1848 Stanton and Mott decided the time was right to hold the first women's rights convention, where they would discuss not only rights but also social conditions of the day. Held in Seneca Falls , New York , on July 19 and 20, 1848, the convention was attended by three hundred people, including forty men. Mott's husband presided over the Page 1703  |  Top of Articleceremonies, which featured the Declaration of Sentiments, a document written by Stanton stating that men and women are equal. She listed eighteen ways in which women were not treated as equals by men, and put forth eleven resolutions, one of which stated that women had the duty to secure the right to vote—a concept known as suffrage. All the resolutions except for that one passed. The idea of giving women the right to vote was still too foreign and radical an idea. Although newspaper reporters made fun of the convention, Stanton believed the publicity could only help get the word out about the cause.

In 1851 Stanton met another dedicated activist, Susan B. Anthony (1820–1906). The women formed an immediate friendship that would last a lifetime. Stanton, whose ties to her husband and family did not allow much travel, developed the ideas and the words to convey them; Anthony, who was unmarried and had no children, brought those ideas and words to the world. Because she was more often in the public eye, Anthony became more famous, but she could not have reached that level of fame without Stanton. 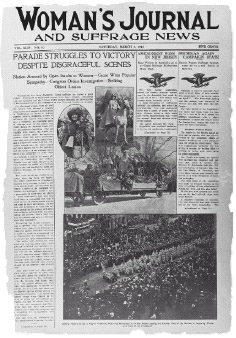 Each different organization within the women's suffrage movement had its own method for spreading information about the cause. This edition of Woman's Journal and Suffrage News shows a women's suffrage parade and gives updates on the movement. THE LIBRARY OF CONGRESS

Although the goal of the suffrage movement was to secure the right to vote, the movement itself was not unified. It was made up of different organizations, each with its own philosophy and plan on how to achieve that goal. The movement suffered from years of internal conflict among leaders and organizations alike.

The movement consisted of two main rights organizations: the American Woman Suffrage Association (AWSA) and the National Woman Suffrage Association (NWSA). The AWSA, the first organization of its kind, was established in 1868 by Lucy Stone (1818–1893) and Henry Blackwell (1825–1909). Its sole focus was women's suffrage, and its strategy was to fight for the right one state at a time. The NWSA was formed in 1869 by Stanton, Anthony, Matilda Joslyn Gage (1826–1898), and several other activists. The NWSA sought many reforms, including Page 1704  |  Top of Articlesuffrage, which it pursued on a federal level. After the Fifteenth Amendment guaranteed all men of any race, color, or previous condition of slavery the right to vote, the NWSA proposed that white women were in fact more fit to vote than many African American men. The AWSA and NWSA, though united in a common goal, competed against one another for funding, members, and support.

As the movement grew, the two organizations realized that nothing would be achieved unless they united. In 1890 they merged to form the National American Woman Suffrage Association (NAWSA). Stanton was its first president, Anthony its second. The NAWSA headed the movement in the Progressive Era (the first two decades of the twentieth century), but it would be many years before they could claim victory.

Two major philosophies of women's rights circulated in the first two decades of the twentieth century. The first, inherited from the prior century, held that women must work together as a group if they are to survive in a man's world. This view stressed the differences between men and women in terms of biology and life experiences, and maintained the moral superiority of the female sex.

The second philosophy, which gained momentum throughout the century, placed less emphasis on gender differences and focused on equal rights and opportunities for women. Those who favored this feminist point of view focused not on solidarity, or power and unity as a group, but on the individuality and unique abilities of each woman. These early feminists believed in every woman's right to self-expression and self-fulfillment.

Each philosophy had its uses. Those who believed in the power of solidarity worked to improve conditions for women in dangerous, low-paying jobs. Working-class women fought successfully for reforms in the workplace, and some activists encouraged women to join labor unions. The Women's Trade Union League (WTUL), founded in 1903 by several wage-earning women, was instrumental in providing support for women's suffrage as the issue gathered steam in the 1910s.

The most important reform

During the first decade of the twentieth century, women's reforms were largely cultural and social. By 1910 many women realized that true power would come only if they were given the right to vote. Suffrage became the goal of the women's movement throughout the second decade, while other reforms were pushed to the bottom of the agenda.

Some states had already granted women suffrage. Wyoming was the first, in 1869, followed by Colorado , Utah , and Idaho . Attitudes toward women in these western states, where women were valued for their contributions to a largely male population, were more progressive than those in eastern states.

The suffrage movement gained strength as young college-educated women joined the ranks of activists. Soon the largely white, middle-class women's movement built solid relationships with working-class white women, and the number of people the movement could reach increased. These women launched door-to-door campaigns throughout poor and working-class urban regions. Some of the more courageous women spoke publicly on street corners, something America had never experienced before. Others focused their reform efforts on farming communities or professional organizations. 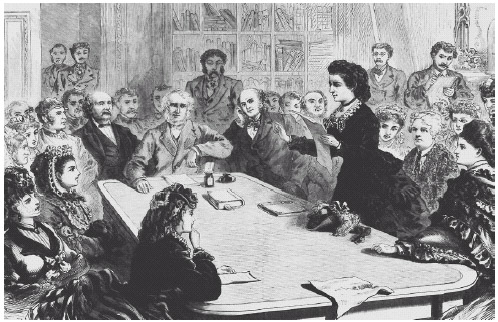 Victoria Woodhull argues in favor of women voting to the Judiciary Committee of the House of Representatives in 1871. College-educated women helped give momentum to the cause. THE LIBRARY OF CONGRESS

In 1910 the state of Washington gave women the right to vote. Next came California and Oregon . In 1913 Illinois became the first state east of the Mississippi River to grant suffrage. By 1914 the movement included hundreds of thousands of women and their husbands, male friends, and coworkers. Some men supported women's suffrage because they believed women were indeed equal to men and thus should have the same rights. But others were in favor of the female vote only when suffragists pointed out that female voters would help reformers reduce political corruption. Women, as the argument went, would vote for men who were truly qualified to hold office and not because a candidate was owed a favor or had bribed them.

As a result of the separate-but-equal (equal rights for African Americans, but separate from whites) doctrine, African American women focused their efforts on the National Association of Colored Women (NACW) and turned it into a well-organized group for the protection and advancement of African Americans. Most of these women, who were in the upper classes of society, agreed with the ideas of their white counterparts: Women had their place (in the home) and were morally superior to men.

One of the most influential and longest-lasting African American associations was formed in 1909. The National Association for the Advancement of Colored People (NAACP) was established by a group of about sixty activists, most of them white. Among them, however, were some of the most famous African American reformers in history, including Ida B. Wells-Barnett (1862–1931) and W. E. B. Du Bois (1868–1963). The organization, which has continued to promote equality of opportunity for African Americans, has a membership of about three hundred thousand.

The cause of women's suffrage got a boost in 1912, when Theodore Roosevelt's Progressive Party announced its support. In January 1918 President Woodrow Wilson voiced his support for the women's suffrage Page 1707  |  Top of Articleamendment, but it was not until June 1919 that Congress passed it by the required two-thirds vote. On August 18, 1920, the states ratified the Nineteenth Amendment to the Constitution, granting women the right to vote. Historians consider the suffrage movement the “first wave” of feminism , the foundation for all future struggles for women's rights.